(Minghui.org) Belgian Falun Dafa practitioners held activities in front of the Chinese Embassy in Brussels on April 20 to mark the 23rd anniversary of the April 25 peaceful appeal.

A practitioner explained, “This is the 23rd year since the persecution began. We come here every year no matter the weather. We stand in front of the CCP’s (Chinese Communist Party) embassy, meditate quietly, do the exercises, tell people about Falun Dafa, and demand that the persecution end.” 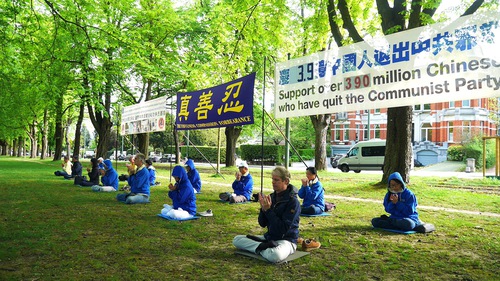 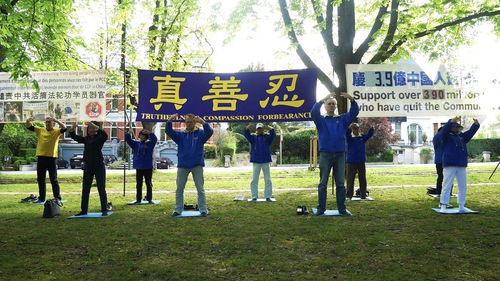 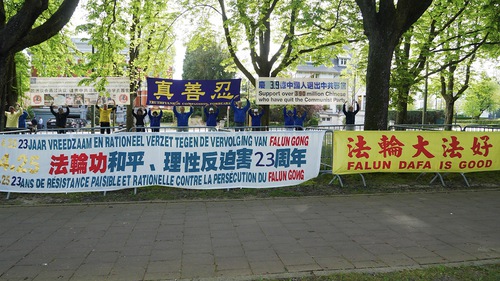 Falun Dafa practitioners demonstrate the exercises in front of the Chinese Embassy in Belgium on April 20, 2022.

Chair of Falun Dafa Association: The CCP Must End the 23-Year-Long Persecution

Nico Bijnens, chair of the Belgian Falun Dafa Association, said, “We commemorate April 25 here every year, and in the same way, no slogans and no violence. We demonstrate the Falun Dafa exercises peacefully and rationally. We put up banners to express our demands and tell the world that Falun Dafa is good. The CCP must stop the persecution that has gone on for 23 years.” 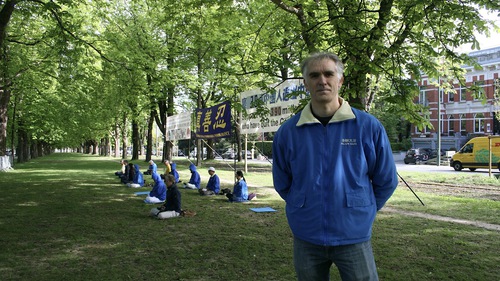 “This persecution was a big mistake from the beginning,” said Mr. Bijnens. “The CCP is persecuting people who practice Truthfulness-Compassion-Forbearance. We are here to show the Chinese people and those who are still following the regime: Falun Dafa is good, but the persecution is unpopular.”

“Of course we hope to see everyone follow the principles of Truthfulness-Compassion-Forbearance and be a good person, and then there is no doubt that the whole world will change.”

Passer-by: I Am Impressed with the Peace of Falun Gong Practitioners

One young man stopped to watch the practitioners do the exercises. He said, “I was attracted by the peaceful demeanor of these people, who meditate in silence while facing the regime that continues to persecute their group (the Chinese embassy is located across the street). I thought it was a good way to express their adherence to their belief and determination against the persecution.”

Referring to the CCP’s brutal persecution of Falun Dafa, the young man said, “Persecution should not exist, nor should it exist in any region or country in the world. The most important thing is that human rights must be respected.”

He indicated that persecution should not exist in any form, whether it is physical, psychological, or some other form of pressure. He also said that people should be able to express their ideas freely, which will make the world more peaceful.

In the end he said, “I am very impressed by their (Falun Dafa practitioners’) demeanor and the tranquility exuded, and their peace and rationality. This energy will spread across the world.” 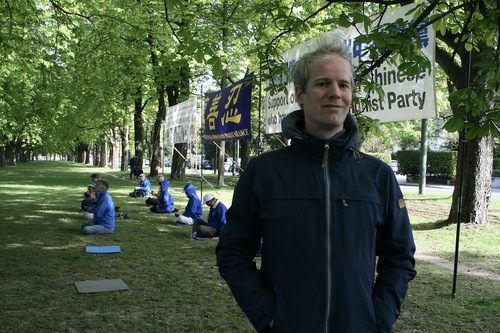 Nicolas Schols, 44 years old, started practicing Falun Dafa when he was 21 in 1999, one month before the CCP initiated the persecution. He said that his cultivation was based on the improvement of his character and his xinxing. He also tells people about Falun Dafa and exposes the CCP’s persecution. Looking back on his cultivation journey, he was filled with emotion.

He recalled, “At that time, I listened to the audio recording of Master Li Hongzhi’s teaching, and at once absorbed a lot of life principles that I had never encountered before. My mind and body changed drastically, and my view of many things changed. Just one month after I found Falun Dafa, the media suddenly began reporting that Falun Dafa was not good. I noticed that all the images were from China, and people here didn’t know what Falun Dafa was. I was very confused: This information (promoted in the news) was wrong; Falun Dafa is not like that. These lies also confused other people. So for me, from the very beginning, I felt I had this great responsibility to tell people that they were being misled by the CCP.”

But he was a new practitioner at that time. Nicholas said, “I still had to understand and study the principles of Dafa and get rid of many attachments. It was a very difficult stage, and it was also a very lonely period of time for me. Because many people did not know what Falun Dafa was, but suddenly read the negative news. I told my friends, parents, family and colleagues that I found a very good thing, which is Falun Dafa. They were completely confused. I explained to them over and over again my personal understanding of Falun Dafa and the misinformation published in the news.”

But no matter what happens, as a Falun Dafa practitioner, Nicholas is convinced that the persecution will not continue as more and more people understand the bad deeds the CCP has done to practitioners. He said, “One day, the CCP will face the full consequences of everything it has done, and humanity will stand up against it.” He was grateful for the opportunity to help others learn about Falun Dafa and the persecution.

In the end he said, “Just like the practitioners who went to Beijing on April 25, 1999, with the same demeanor. We are peaceful and not violent. We just want a stable cultivation environment. Please believe Falun Dafa is good.”

Minghui.org has confirmed the deaths of thousands of practitioners due to the persecution over the years, though due to the difficulty in getting information out of China, the actual number is suspected to be much higher. Many more have been imprisoned and tortured for their faith.