(Minghui.org) Looking at this loving couple today, it’s hard to believe they nearly divorced because of money issues and family arguments. The teachings of Falun Dafa (Truthfulness-Compassion-Forbearance) saved the nearly broken family and inspired Wenli and her husband Keyan to work together to create a new career and lifestyle. Now they both live their dream lives while working closely with each other to tell people about Falun Dafa. 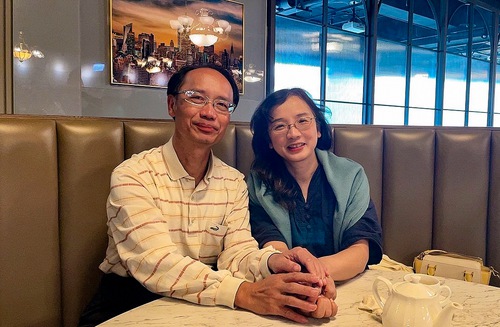 Today, Wenli and her husband Keyan are a happy couple thanks to her practice of Falun Dafa.

Wenli was born into a wealthy, upper-class family and held a steady, good-paying job. Keyan got his degree in the U.S. and owned a company. How did they go from being a golden couple to fighting incessantly and nearly breaking up? How did Wenli's practice of Falun Dafa repair their marriage—and their lives?

Wenli's parents adored her, but her mother died when she was 17. For a long time she had doubts about why she was here and wept non-stop every Mother's Day. She tried practicing Tantrism but soon quit.

She passed the National Exam and became a public auditor after she graduated from college. Her job performance and promotions were based on the number of cases she audited and corrected. Most of the people she worked with respected her and did what she said. As time passed, she became bureaucratic and arrogant. “I did whatever I wanted and was full of myself. I was never nice, and I had no tolerance for anyone else. It was always they who needed to put up with me,” she said.

Wenli spent long hours at work. She was under pressure and faced a lot of competition. After work she had to take care of her children and family. She had no time for herself. One of her supervisors suggested she try practicing Falun Dafa. After attending the free Nine Day Lecture Workshop, she found that Falun Dafa answered all her questions about life. However, the couple’s busy lifestyle and her husband's financial problems prevented her from becoming a true cultivator—until she became very ill and nearly died. After she recovered, she realized that she had to cultivate diligently and begin doing the three things a practitioner should do. Gradually, everything in her life took a turn for the better.

No Longer Arrogant and Cold 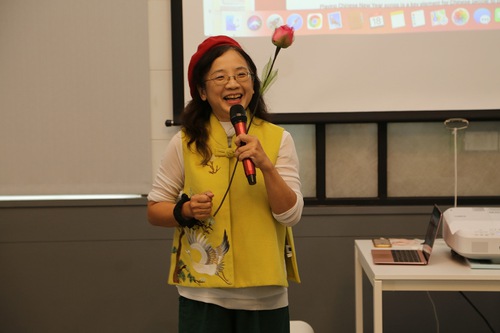 After she began practicing Falun Dafa, Wenli had renewed energy and was full of joy. She is now calm and friendly and considerate of others.

Wenli always had health problems growing up. She had migraine headaches and frequently caught colds. When she entered an enclosed space and couldn't get fresh air, she developed an excruciating headache. Sometimes she got so sick that she lost her appetite, could not sleep, and could barely walk. Her doctor said nothing would help her.

After she began to practice Falun Dafa, her health improved by the day. All of her symptoms were soon gone without ever seeing a doctor. Now she sleeps three hours a night but has plenty of energy to handle a busy day. She also went from being cold and arrogant to warm and humble. Her husband's friends were surprised by her changes: “What happened to your wife?” He attributes her positive change to Falun Dafa's teachings.

Her in-laws owned a small business in the countryside. Their living conditions were nothing like the affluent surroundings Wenli grew up in. They weren't as eloquent as she was. She never liked to visit them and sometimes didn't see them for long periods of time. She had no respect for them, and this led to a lot of conflicts. Her mother-in-law once tried to show her how to do the dishes, and she shouted, “My grandma told me to do it this way!”

After she began to practice Falun Dafa, she learned how to put herself in others' shoes and be considerate. She saw her in-laws from a different perspective and found that they were simple and honest people. The family conflicts stopped. Now, no matter how busy she is, she visits her in-laws regularly and definitely on the holidays. She does her best to get them whatever they need. Her mother-in-law now praises her.

One day Wenli noticed how thin and weak her mother-in-law was and felt guilty for her previous bad behavior. She apologized to her mother-in-law: “I was headstrong and not a nice person. I made many mistakes and our marriage troubled you. I am truly sorry!” Her mother-in-law did not blame her a bit.

Letting Go of Attachment to Money

Keyan is easygoing and intelligent, and he had no trouble starting up a company. However, business wasn't steady and the company began to lose money. Each month, he spent hundreds of thousands on salaries alone. To cover other costs, Wenli repeatedly had to lend her husband large sums of money. She saw no end to it and demanded that he pay her back. He did, but soon he had to borrow from her again. It was a downward spiral and it frightened her. She tried to force him to close the company and change careers. They constantly fought over money. She didn't dare tell her parents, let alone her best friends. As the resentment and grievances built up, she started to verbally abuse him and asked for a divorce. That made her in-laws worry and feel helpless.

The teachings of Falun Dafa allowed her to realize that her attachments to self-interest, ego, and emotion were the cause of all the conflicts. When she became ill, she knew that it was a warning that she didn't do well in her cultivation. She pulled herself together and told her husband how she felt and her plan for the future. He agreed with her, and the two decided to work together to face the difficulties. His business soon started to flourish. It did so well that he launched another business, and it also did well. As his company expanded, so did his connections in mainstream society and among Taiwan’s upper classes. 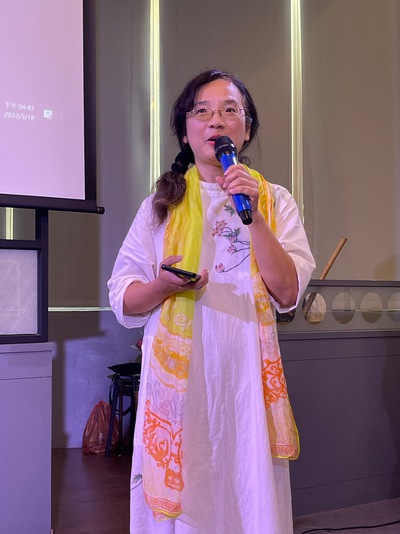 Wenli’s family enrolled her in professional music classes when she was little, and she had excellent training in music. She decided to hold music forums to promote Shen Yun and introduce people to Falun Dafa. With all her husband's connections, they came up with a lot of good ideas to do this.

When they were looking for a good location to hold the forums, her husband's company moved to a new office space. The space happened to have an extra room that could hold 60 people. They used it for the forum, and it worked out well. Sometimes people want to rent the space for other purposes, and the couple are glad to have more chances to tell people about Falun Dafa.

Now, they each have their own career, yet they work together closely to bring Falun Dafa into more people's lives.