(Minghui.org) The annual St. Patrick’s Day celebration in Keansburg, New Jersey, was held on March 26, 2022. George Hoff, Mayor of Keansburg, invited Falun Dafa practitioners to participate in this year’s parade to celebrate Irish tradition. Over 50 groups joined the parade this year and practitioners were the only Chinese group.

The mayor and local residents embraced Chinese tradition and enjoyed the practitioners' performance. Many of the parade-goers signed the petition to support the practitioners' effort to end the ongoing persecution of Falun Dafa in China. 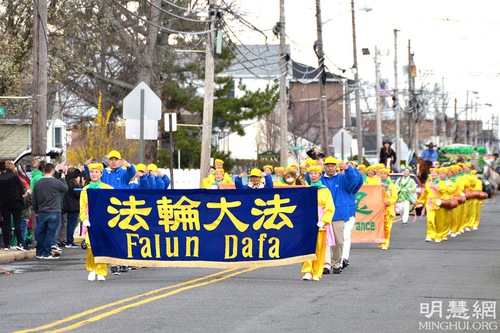 The Falun Dafa entry was the only Chinese group in the annual St. Patrick’s Day Parade in Keansburg, NJ, on March 26, 2022. 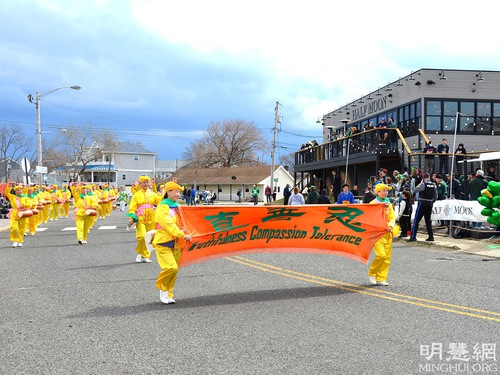 The sun shone brightly even though rain had been predicted for the day of the parade. The mayor said that he felt amazed when the rain stopped and was thrilled that so many people came out to see the parade. He thanked God for answering his prayers and bringing the sunshine, he also thanked practitioners for bringing a good time. 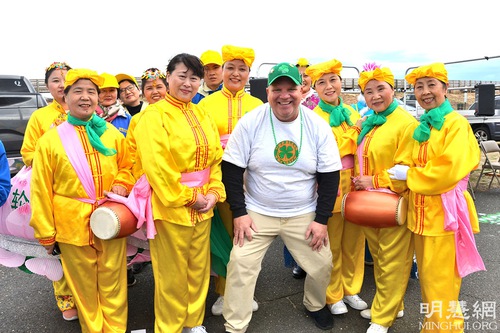 Mayor Hoff told practitioners that he saw their waist drum team in a parade in New York City and really liked it. That was why he sent a letter inviting them to participate in this year’s parade. He enjoyed watching their procession and called it a fusion of Eastern and Western cultures. He praised all three of the groups that came: the Waist Drum Band, the Lotus Boat, and the exercise demonstration group, and said they were outstanding.

He said, “The practitioners showcased their tradition, and brought us their dances, Waist Drums, and Lotus Boat. The event is a fusion of traditions and cultures.” He added that he plans to invite the practitioners next year. 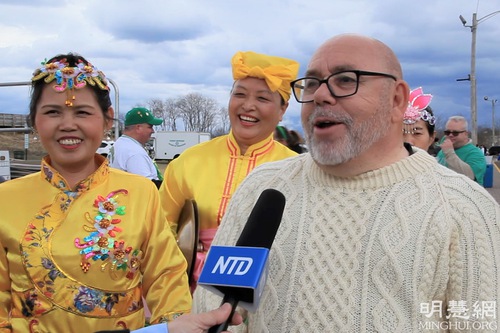 Many parade attendees said they liked practitioners’ entry and the principles of Falun Dafa’s teachings “Truthfulness, Compassion, Forbearance.” Many people signed the petition to protest the ongoing persecution of Falun Dafa in China and demand the Chinese Communist regime end the persecution immediately.

Harley Booket signed the petition and said that she really liked the principles of Truthfulness, Compassion, and Forbearance. She said that she supported the practitioners’ efforts to tell people about the persecution. She thanked practitioners for coming to Keansburg.

Cammon Buono liked the practitioners’ customs and said that it was cool. He wished to understand more about Falun Dafa and signed the petition. He said, “Practitioners deliver a good message.”

Ms. Li Fenfen, a member of the waist drum team, said they have participated in seven parades in three states in March alone. They performed in two parades in one day. During the parade in Keansburg over 9,900 people signed the petition.

Another team member Ms. Yan Fulan said, “People are excited to see us in the parades, they cheered and waved at us when we walked by them. I was impressed to see two police officers salute us as we all walked past them.” 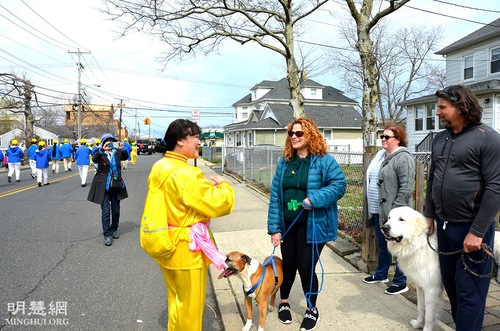 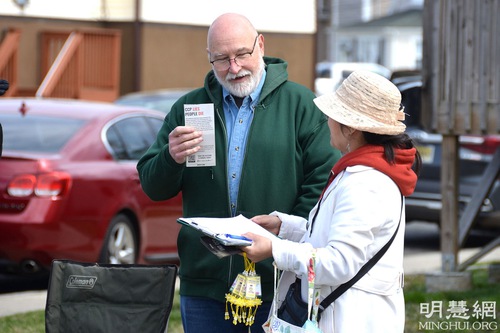 Parade-goers listen as practitioners tell them about the persecution of Falun Dafa in China.

The practitioners were glad to see a person shout, “We love you!” as soon as he saw the banner that says “Truthfulness, Compassion, Forbearance.” The practitioners said that the principles are universal values and they wanted to share their Chinese traditions.

It was Ms. Huang Qionghui’s first time participating in the parade. She was happy to celebrate the holiday with the local residents and, “To bring them Falun Dafa as well as Chinese culture.”