(Minghui.org) Falun Dafa practitioners were invited to participate in the Kolkata International Book Fair held from February 28 to March 13, 2022. They demonstrated the exercises and handed out information about Falun Dafa. Many people stopped to talk with them, and learned to do the exercises. Many others also purchased Falun Dafa books and expressed their interest in learning more about the ancient spiritual practice.

The Kolkata International Book Fair is the world’s largest non-trade book fair, the largest book fair in Asia and the most attended book fair in the world. This year, more than 1.8 million people attended. 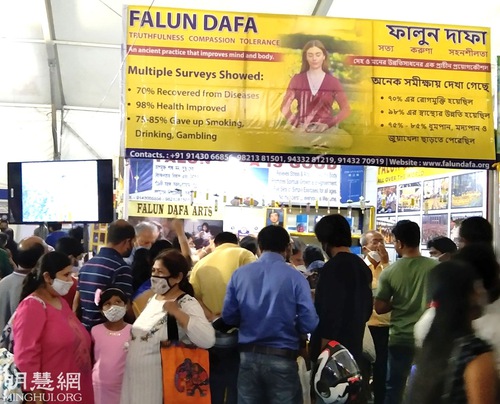 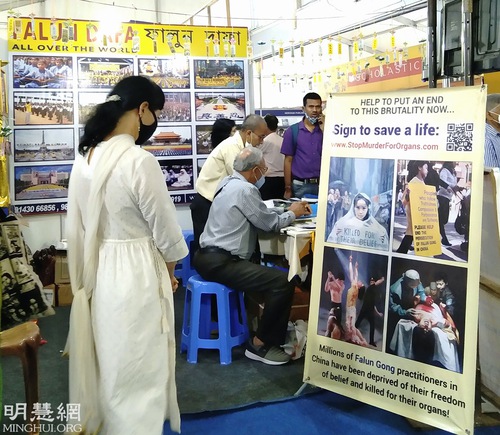 A visitor reads the poster “Sign to Save a Life” 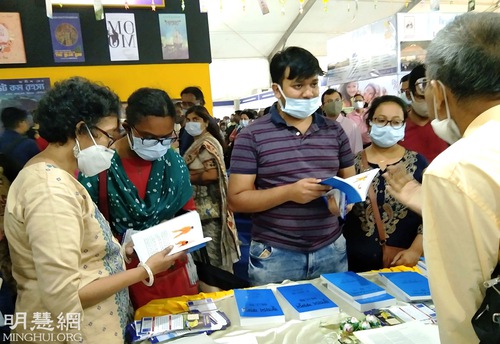 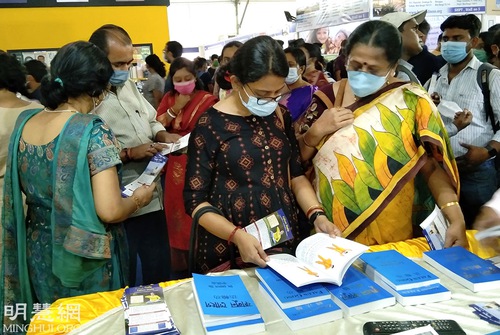 People browse through the Falun Dafa books and purchase them 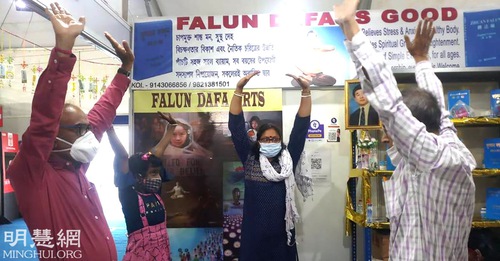 A family learns the First Exercise

On weekends there was no standing room around the Falun Dafa booth. People were drawn by the Health Benefits Survey of Falun Dafa and many young people wanted to know if they could give up their addiction to smoking and drinking and were keen to learn the exercises.

Some elderly people who purchased the books said they now have a better understanding of Falun Dafa since the translation in the local language is well executed and they feel like reading again. They also said that they were amazed how their aches and pains were reduced after doing the exercises a little and were convinced that Zhuan Falun had amazing power.

Many people said they learned from online browsing about the persecution of Falun Dafa practitioners in China and the illegal trade of organs through China’s organ harvesting of Falun Dafa practitioners. They expressed shock that something so brutal was going on in this day and age. They were given links to websites which provide more information regarding the persecution and also petitions they could sign.

Another man said he detested China’s aggression and said he would lend his support to any cause to stop that. He also purchased Zhuan Falun in English.

When people saw that the books were translated into the local language Bengali they gladly purchased them. A local Falun Dafa enthusiast said in no other book fair in India has one witnessed sale of Dafa Books in such large numbers. Often when packing up for the day, people would come and buy the books as if they did not want to miss out on something so precious.

Many people who purchased the books came back to buy a set to gift it to their relatives. Practitioners would usually teach those who purchased the books the first exercise. Most of them said they could feel the energy and a sense of lightness and wanted to follow up on the exercises later. They were very happy to learn about the free online webinars and were given the link.

Members of the Police and Security Force kept coming back in groups, purchased the books and asked for exercise demonstration DVDs. They said they could not participate since they were in uniform. However, they wanted to organize exercise demonstrations at their stations and were happy to learn about the online webinars.

All practitioners who participated in the Kolkata Book Fair felt that it was a great opportunity to reach out to so many people and tell them about Falun Dafa. Local practitioners organized follow up sessions to teach the exercises face to face as well as through online webinars. They look forward to participating again next year and plan and organize in a better way to reach out to more people.