(Minghui.org) Falun Dafa practitioners in Toronto, Canada, held an event in front of the provincial government building to commemorate the 23rd anniversary of the April 25 peaceful appeal. The event in Toronto was held on April 14.

Practitioners demonstrated the exercises and talked to people about the petition to end the persecution in China, urging them to learn about Falun Dafa (also called Falun Gong), recognize the true nature of the Chinese Communist Party (CCP), and quit their memberships in the Party and its affiliated organizations.

Twenty-three years ago, on April 25, 1999, about 10,000 Falun Dafa practitioners went to the State Petitions Office in Beijing to petition peacefully for the release of 45 practitioners who had been illegally arrested in Tianjin, a city near Beijing. Their petition was reported by mainstream media across the world. Their courage and peaceful demeanor impressed the world. 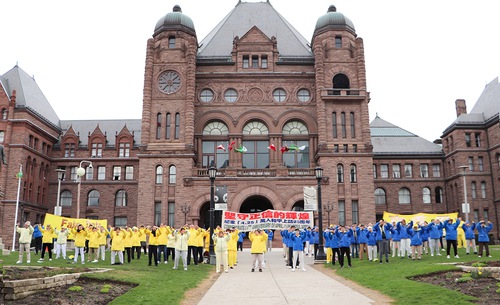 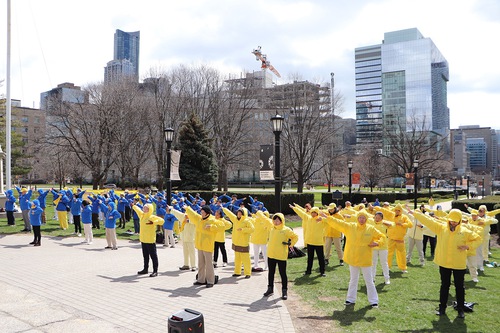 Practitioners do the exercises in front of the provincial building on April 14. 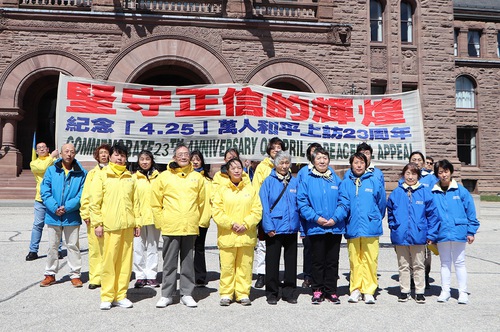 Practitioners who participated in the April 25 appeal in Beijing in 1999.

Participant in the Beijing Appeal 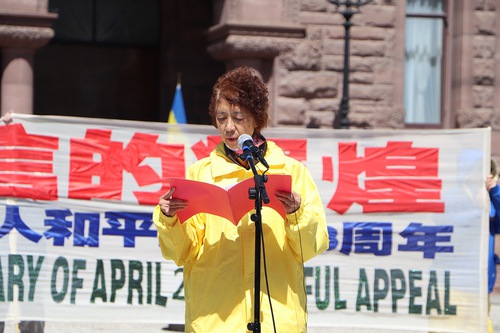 Feng Xiumin, who participated in the April 25 appeal, speaks at the rally.

In addressing the rally, Feng Xiumin said that she worked for the Tianjin Municipal Government and participated in the April 25 petition in 1999. On April 18, 1999, another practitioner told her that an article attacking Falun Gong had been published in the Youth Expo magazine of the Tianjin Institute of Education. Ms. Feng felt that the article was not in line with the facts, so she went to the magazine office with other practitioners. When they arrived, there were about four or five hundred practitioners in the courtyard, and everyone waited quietly. Five practitioner/representatives went into the office to discuss the error in the article.

Mr. Hao from Ms. Feng’s practice site was one of the five representatives. He told the magazine editors that his child’s health issues were resolved and he did well in school after practicing Falun Dafa. The person in charge of the magazine said that they would try their best to recall the issue that had been published, but they still needed to get permission from upper-level officials. For the next few days, the magazine did not respond. Ms. Feng said she went there every morning and left late in the evening. She and other practitioners waited quietly outside the magazine office for a response.

“The magazine office finally told us that the issue could not be recalled. But practitioners didn’t leave. We didn’t want to let the article that was filled with errors to mislead people,” she said.

“Early on April 23, 1999, the College of Education began broadcasting a message, telling everyone to leave as soon as possible. They said that the venue would be cleared at 7 p.m. Practitioners sat quietly and meditated. Around 7 p.m., four military vehicles arrived and parked on the left side of the gate and a large bus parked on the right side of the gate.

“Many young armed policemen, all in camouflage uniforms and carrying walkie-talkies and electric batons, jumped out of the vehicles. They waved electric batons and drove the practitioners away. They mercilessly beat those who did not move,” Ms. Feng recalled.

“Many practitioners had bloody cuts on their heads and bodies and couldn’t move. Some practitioners endured the pain and did not leave. They were either carried out of the compound by the police and dumped on the roadside, or they were carried onto the bus. I later heard that 45 practitioners were arrested.”

Ms. Feng felt that the magazine office could not solve the problem, so she and other practitioners went to the city government. They lined up and waited at the side entrance.

“At 2 a.m., two city officials came out and said that they could not solve the issue. They told us to go to Beijing and petition.”

Ms. Feng went to Beijing by bus on April 25. She said she arrived at the State Appeals Office that afternoon. There were already about 10,000 people waiting quietly along the walls outside the office. The road was filled with military vehicles, creating a tense atmosphere.

Former Tianjin Resident: My Parents Participated in the Appeal 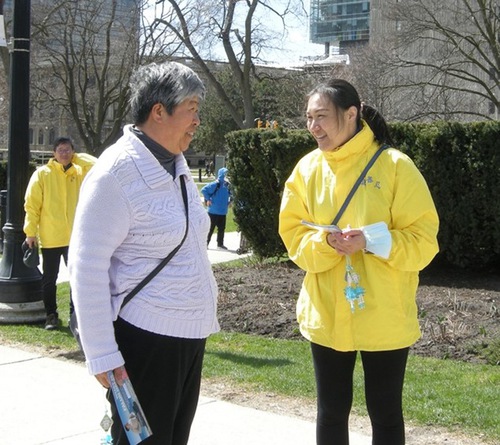 Ms. Song from Kentucky was sightseeing in Toronto. When she saw the rally, she stopped and spoke with a practitioner. She said, “I know the CCP is evil. I don’t practice Falun Gong, but my father and mother do. My mother was in bad health in the past, but she became healthy after she began practicing. She is 88 years old this year.”

Ms. Song, who is originally from Tianjin, China, said, “In my mother’s group practice site, many practitioners were professors at Nankai University. From April 18 to April 24, 1999, they went to participate in the peaceful petition and went to the relevant institutions and departments in Tianjin to report the actual situation of Falun Gong.”

She said they just sat there peacefully. They obeyed the law and didn’t confront the police or shout slogans. But they were put on a bus by the CCP and dropped off in the suburbs. Her father and mother didn’t have a phone at that time. Fortunately, they met kind people who gave them a ride. It was already late at night when they got home.

“My mother’s family was frequently persecuted by the CCP,” she said. “The CCP should be disintegrated immediately because it is so harmful.” After learning about the significance of withdrawing from the CCP organizations, she agreed to quit the Youth League and the Young Pioneers.

“The Peaceful Petition Was Completely Legal” 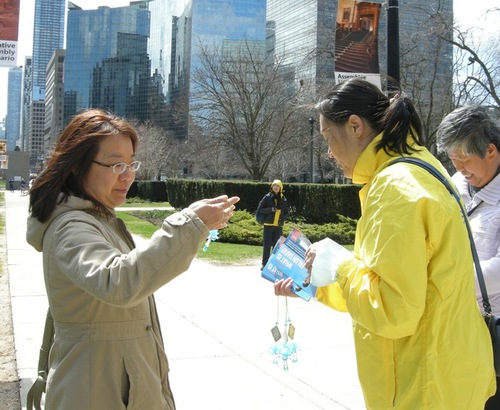 Ms. Zhang (left), a tourist visiting from the USA

Ms. Zhang, also a tourist from the US, said that she was Chinese-American, originally from Guangdong Province, China. After listening to a practitioner explain Falun Dafa and the significance of quitting the CCP, she readily agreed to withdraw from the Party.

Ms. Zhang said, “The CCP’s persecution of practitioners is illegal. In any country, people should have freedom of belief. It is not wrong for Falun Dafa practitioners to appeal for their rights because they did not break the law. In any country with freedom and democracy, this peaceful and rational petition is completely legal and completely in line with the law.”

She also said, “The CCP’s persecution of Falun Dafa practitioners and the Party lies have had a terrible impact on the Chinese. They have destroyed China’s traditional culture and made people morally corrupt. The Party should be disintegrated immediately.”

Man from China Happy to Find a Group Practice Site 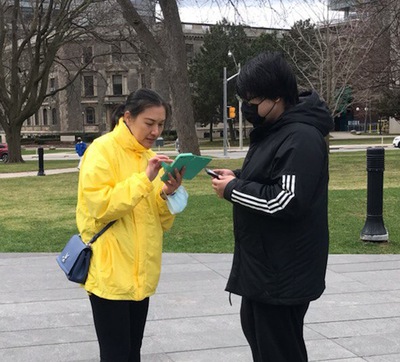 Mr. Yoshi moved to Japan with his parents at the age of ten and immigrated to Canada two years ago. He said, “I am a native of Tieling City in northeast China. When Master Li taught Dafa in the Northeast, he was a household name in our area. Everyone knew that Falun Dafa had an amazing effect in resolving illnesses and keeping fit. My parents also practiced. But after the CCP began to persecute Falun Dafa in 1999, my parents and some of our neighbors did not dare to continue.”

He said, “I got information about Falun Dafa at the Chinatown Service Center for Quitting the CCP. I noticed that there were many practice sites in Toronto. Practitioners also hold parades to tell people about Falun Dafa, which shows me how it’s welcomed here. I want to know more about Dafa. So I am here today and I am very moved.”

Mr. Yoshi said that he would bring his parents to the Queen’s Park practice site to do the exercises so that they could feel the beauty of Dafa again.

Because he witnessed the persecution of practitioners he knew when he was a child, Mr. Yoshi quit the CCP organizations he’d once joined.

Police Officer on Duty: Falun Dafa Is Persecuted by the CCP

A police officer on duty at the entrance to the Ontario Parliament Building smiled and greeted practitioners when he saw them. He said he knew that practitioners were persecuted by the CCP and wanted to learn more about the situation. A practitioner handed him a flyer, which he was happy to take.

Background: What Is Falun Dafa and Why is the CCP persecuting It?

Falun Dafa (also known as Falun Gong) was first introduced to the public by Mr. Li Hongzhi in Changchun, China, in 1992. The spiritual discipline is now practiced in over 100 countries worldwide. Millions of people who have embraced the teachings, which are based on the principles of Truthfulness, Compassion, and Forbearance, and learned the five exercises have experienced improved health and well-being.

“Eliminate My Notions and Become a True Practitioner”

“A Rainbow after the Storm”