(Minghui.org) Today's news from China includes incidents of persecution that took place in 7 cities or counties in 5 provinces, where at least 11 practitioners were recently persecuted for their belief. 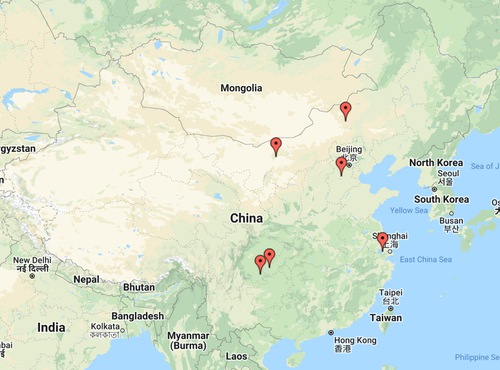 Ms. Jiang Suzhen, in her 70s, was imprisoned for three years and was released on November 16, 2019. She was arrested again by officers from the Shuangta Police Station on July 19, 2020 and was detained in the Suzhou Women’s Detention Center. She was fed unknown medications during her detention, which caused her to act abnormally. She has lost contact after she was released.

Ms. Wu Derong, 71, from the Naxi District, was arrested and taken to a police station on the afternoon of March 24, 2022 because she was found to have accompanied a practitioner’s family member to a law firm. Ms. Wu was interrogated for three hours in the police station before she was released.

Five days later, at around 3 p.m. on March 29, 2022, five people went to her home and tricked her into opening the door by claiming that they were from the gas company. They ransacked her home and confiscated her Falun Gong books, a photo of Falun Gong’s founder, couplets, and other items.

Ms. Yang Taiying from Naxi District was arrested on March 5, 2022. She was first detained in Hutou Town, Hejiang County and is now in the Luzhou City Detention Center.

Mr. Xu Qinghai, Ms. Xu Wenting and Ms. Shen Ying were arrested by officers from the Gucheng Town Police Station on the afternoon of April 1, 2022.

Ms. Zhang Xiuqing from Duolun County went to Beijing to appeal for Falun Gong in February 2000. She was repeatedly arrested and detained. Ms. Zhang passed away in 2007 or 2008.

Ms. Zhang’s daughter Ms. Xu Qian passed the exam and the interview during a public recruiting for four staff members in the Duolun County Statistics Bureau. However, she was informed by the Duolun County Labor and Human Resource Bureau at the end of March 2022, that she was rejected because her deceased mother Ms. Zhang Xiuqing, practiced Falun Gong.

Ms. Wang Lei, originally from Bayannaoer City, Inner Mongolia, lives in Liang Township, Fangshan District, Beijing. She was released on February 25, 2022 after being incarcerated in the Hohhot Women’s Prison for eight years. She suffered a mental collapse while detained and almost became blind. She is now healthy both physically and mentally.

Ms. Dong Guohui from the Yongchuan District were seen talking to people about Falun Gong on Dananmen on March 27, 2022. The next morning, two police officers and three staff members of the local neighborhood committee went to her home. They warned her not to go out or talk to anyone about Falun Gong.

Ms. Jin Yuling, 60, and Ms. Bai Yuzhen, 80, were sentenced to three and six months and three years respectively, on January 11, 2022 by the Huangchuan County Court. They appealed to the Xinyang City Intermediate Court, which has accepted their cases.