(Minghui.org) Ms. Xu Yanjing, an art teacher at Xuanwei City College in Yunnan Province, was in very poor health and almost died of bleeding due to chronic gynecological disease. After taking up Falun Dafa, a spiritual discipline also known as Falun Gong, all her diseases disappeared.

Ms. Xu’s happy life didn’t last very long. After the Chinese Communist Party (CCP) started to persecute Falun Gong in July 1999, she and her family have been subjected to ongoing relentless persecution.

In 2003, Ms. Xu was detained in a brainwashing center inside a Communist Party school. She was arrested again in 2005 and given a three-year labor camp term. Her husband paid a huge bribe in order to get her released earlier. She lost her teaching job upon returning home and was forced to sell her villa for an extremely low price. Her husband also divorced her.

Ms. Xu was arrested one more time in 2012 and sentenced to four years in prison. During her detention, she was repeatedly injected with unknown drugs, which caused her to lose sight one week before her scheduled release in 2016.

Ms. Xu looks a lot older than her actual age because of the repeated persecution. Now she can only see very little with her right eye. Yet the authorities continued to harass her on a regular basis.

The persecution didn’t only destroy her own life, but also caused tremendous damage to her family. Her nephew suffered a mental breakdown after being arrested with her in 2012. His father (Ms. Xu’s brother) was devastated by his condition and died one year later. Ms. Xu’s mother, after living in fear and struggling with poor health for years, passed away in 2019.

Three Years in a Labor Camp

Ms. Xu was arrested and her home ransacked on May 19, 2005. She was given three years in a labor camp. The persecution severely damaged her health and she began to suffer dangerously high blood pressure. In order to get Ms. Xu released, her husband spent all their savings and took on some debts to pay the guards. Although he refused to tell her the specific amount, she suspected he spent at least several tens of thousands of yuan. She returned home eight months before her term was set to expire.

Ms. Xu no longer had a normal home after her release. The villa she and her husband had built for decades was looted by thieves, and the doors and windows were gone. She was intimidated and monitored by the 610 Office, an extra-legal agency created specifically to carry out the persecution, for a long time. She was forced to sell the villa and her husband also divorced her.

Ms. Xu was barred from teaching by the school but was assigned to take care of flowers and plants and only earned 800 yuan per month. With an ailing mother and a son who was still attending middle school, the whole family relied on this meager income. She later decided to quit her job and make a living by providing private tutoring to children to learn painting.

Ms. Xu was arrested on the morning of August 31, 2012, by a group of officers led by the deputy chief of Xuanwei City Police Department. Her home was ransacked and many personal belongings such as computers, MP3 players, and Falun Gong books were confiscated.

Ms. Xu was directly taken to Xuanwei City Detention Center. On the same day, her nephew, Mr. Xu Ziyi, who didn’t practice Falun Gong, was also arrested and taken to the detention center. His printer at home was confiscated. He was later brought home by his father in the evening.

The young man was terrified by the police and suffered a mental breakdown after returning home. Sometimes he stood on the street for hours without going home. Some unidentified officials often came to harass him. His father took him to hospitals around the country to seek a cure, but to no avail. The father’s own health deteriorated quickly and he passed away in 2013, at the age of 49.

Ms. Xu’s mother also suffered tremendously. The elderly woman became seriously ill following Ms. Xu’s arrest. She went to the detention center on December 5, 2012, but was denied to see her. She returned home in tears and her condition worsened.

Ms. Xu was sentenced to four years at Yunnan No. 2 Women’s Prison, where she was subjected to all kinds of torture means. Her blood pressure remained dangerously high. After the prison doctor said that Ms. Xu had heart disease and infection in the liver and lungs, she was forced to take unknown medicines and injections several times every day.

Ms. Xu refused to renounce Falun Gong. She was thus forced to sit on a small stool for a long time and restricted from going to the toilet, which led her to have incontinence. She was then assigned to No. 3 Ward, where the prison guards forced her to read books and watch videos that slandered Falun Gong. They forced her to write thought reports afterward. Gradually, her eyesight decreased and her vision became blurry. She felt her legs heavy and her body numb.

One week before she was scheduled to be released in 2016, Ms. Xu was forcefully injected with unknown drugs every day. Shortly after, she completely lost sight of her left eye. 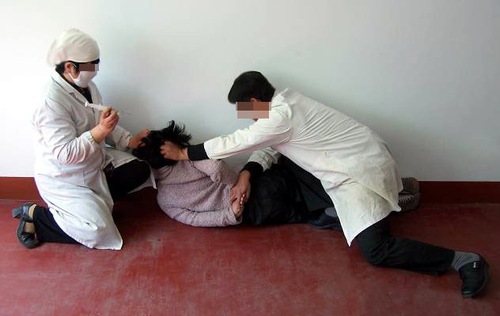 The harassment against Ms. Xu has never stopped since she was released from prison. Once when Ms. Xu was not at home, several officers came to ask her mother whether she had Falun Gong pamphlets. Not knowing it was a trick, her mother gave them a copy of Zhuan Falun, the main book of Falun Gong. The policemen took a picture of the book, got Ms. Xu’s phone number, and left.

One time, two people shouted at Ms. Xu downstairs, saying that they were sending her a bag of rice. Ms. Xu refused to accept it, but asked if they could give her job back.

On another occasion, an officer knocked on Ms. Xu’s door, saying that he came to check her family’s residential registration. But she realized later on her home was the only one in the neighborhood that was checked.

Three officers approached Ms. Xu on the morning of May 12, 2021. They asked to go to her home to take a look. Thinking that this might be an opportunity to clarify the facts about Falun Gong to them, Ms. Xu agreed. As they were talking, one officer asked to use Ms. Xu’s son’s computer to send a personal email. She agreed, only to realize that the officer could have used her own cellphone to send the email. Her neighbors also told her later on that they saw the officers taking pictures of her home before she came out.

In November 2021, five officers harassed Ms. Xu again at home, with the excuse to buy her paintings.

“Self Deluding Flattery Traps are Dangerous”