(Minghui.org) Tornadoes swept across northern and central Texas and parts of Oklahoma in the US on March 21, 2022, killing one person, injuring many, and damaging homes and businesses. A total of 54,000 households lost power.

Earthquakes also occurred in China, Japan, and Iran around March 17, 2022. The Fukushima earthquake in Japan registered a magnitude of 7.4, killing 4 and injuring 174.

Texas tornado leaves tens of thousands of homes without power

In Round Rock, Texas, a city of about 120,000 people about 20 miles from Austin, several homes were destroyed after a tornado swept through the area, local officials said.

Buildings across the city suffered significant structural damage, Round Rock police reported in a news conference on the night of March 21, 2022.

In addition, at least one tornado hit Elgin, east of Austin, causing significant damage and some injuries. In Bowie, about 90 miles northwest of Dallas, a family of three was rescued after their house was razed to the ground. A woman was hospitalized, according to a local NBC affiliate.

Multiple highways in Jack County were closed due to fallen trees and debris, according to a tweet from the Texas Department of Transportation.

Texas and Oklahoma were both damaged by tornadoes on March 21, with 20 tornadoes reported in the two states, according to the National Weather Service. More than 54,000 customers in Texas lost power, mostly in the Houston area, according to PowerOutage.US. In Oklahoma, more than 11,449 people were without power.

Separately, Texas fire officials said that, due to the severe dry weather, in the past week they have dealt with more than 170 wildfires that have burned more than 108,000 acres.

Magnitude-6.6 Earthquake Off the Coast of Hualien County, Taiwan, Shook the Whole Island

According to information from the Central Meteorological Administration of Taiwan, at 1:41 a.m. on March 23, an earthquake with a magnitude of 6.6 on the Richter scale occurred off the coast of Hualien County, Taiwan, with a depth of 30.6 kilometers. The maximum earthquake intensity was over 6 in Taitung; over 5.5 in Hualien; and Nantou, Chiayi, Kaohsiung, Yunlin, Taichung, Yilan, Tainan, Changhua, Miaoli, Hsinchu counties had an earthquake of magnitude 4. 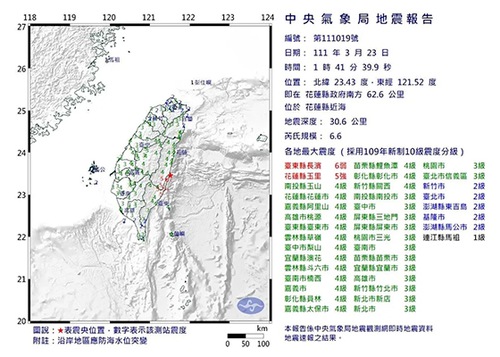 Immediately after 1:43 a.m., another magnitude 6.1 earthquake occurred. The epicenter was located in Fengbin Township, Hualien County. The largest earthquake of magnitude of 4 occurred in Hualien, Taitung, Nantou, and Yunlin.

Hualien and Taitung experienced several felt earthquakes overnight. At 3:35 a.m. offshore Hualien, there was another earthquake with a magnitude of 5.8 on the Richter scale, with a maximum magnitude of 4 in Taitung and Hualien counties.

During that period, many people in Taitung were awakened by a wave of shaking and a national-level alarm, especially in Chenggong Township and Changbin Township on the east coast. Residents ran out into the streets. Tourists in hotels were afraid to go back to their rooms afterwards.

In addition, the levels of many residential water towers have gone down due to the quakes as pipes have broken and leaked. Items fell off of supermarkets shelves. An 88-year-old man was taken to hospital after being cut by falling glass.

Both Taiwan Semiconductor Manufacturing Company (TSMC) and United Microelectronics Corporation (UMC) were affected by the earthquake, and a total of 1,203 households in Pingtung City suffered power outages.

The road surface cracked at 32.5 kilometers of the eastern section of the Yuchang Highway on the 30th line of Taiwan, and a boulder weighing more than ten tons in Changbin Township fell to the ground.

Also damaged in the earthquakes were six ponds of white shrimp raised by a fisherman surnamed Chen in the Meishan area of Changbin Township. The earthquake caused the entire gate and the surrounding wall of the fish farm to collapse. The water pipe ruptured. About 100,000 shrimps flew away with the water. In addition to the repair costs, the loss exceeded two million Taiwan dollars.

A strong earthquake occurred in the northeastern region of Japan at 11:36 p.m. on March 16, Japan time. The Japan Meteorological Agency originally announced the earthquake scale of 7.3, but it was later revised to 7.4. The epicenter was off the coast of Fukushima Prefecture. The Meteorological Agency originally announced that the depth of the earthquake was 60 kilometers, but later changed it to 57 kilometers. Miyagi and Fukushima prefectures observed the greatest earthquake intensity of 6.5.

According to reports, as of 8:00 a.m. on March 17, the earthquake was known to have killed at least 4 people and injured 174 others.

The strong earthquake caused 16 of the 17 carriages of the Yamabiko 223 train to derail on the Tohoku Shinkansen between Fukushima and Shiroishi Zao stations. None of the 75 passengers and three crew members on the train were injured, and they got off the train and walked about two kilometers to board a bus.

According to the Nippon Mainichi Shimbun, the last time the Shinkansen derailed with passengers in operation was when the Chuetsu earthquake in Niigata Prefecture occurred in October 2004, when the Joetsu Shinkansen train derailed.

Earthquakes in China, Iran, and Other Regions

In addition to the Fukushima earthquake in Japan, almost at the same time, around March 17, earthquakes occurred in Ishigaki City in Japan, Lunga Port in Iran, and Gansu Province in China.

According to the United States Geological Survey (USGS), at 7:15 a.m. on March 17, an earthquake of magnitude 5.8 occurred in the north-northwest (27.025 degrees north latitude, 54.632 degrees east longitude) of Bandar Lengeh, Iran, with a focal depth of only 10 km.

China Earthquake Networks reported that at 9:35 p.m. on March 16, an earthquake of magnitude 5.5 occurred in Kashmir (35.61 degrees north latitude, 75.16 degrees east longitude), with a focal depth of 10 kilometers.

China Earthquake Networks also reported that at 8:26 a.m. on March 17, an earthquake of magnitude 5.1 occurred in Zhangye, Gansu Province, and was felt in Jiuquan, Qinghai, and other places. The focal depth was 9 kilometers.