(Minghui.org) Locals in the city of Târgu Mureș, which is in the historic Transylvania region, had an opportunity to learn about Falun Dafa from March 11 to 13, 2022, when practitioners held activities in the center of the city. 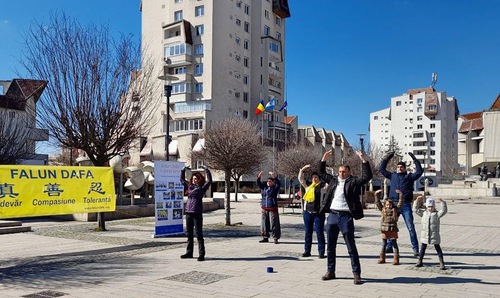 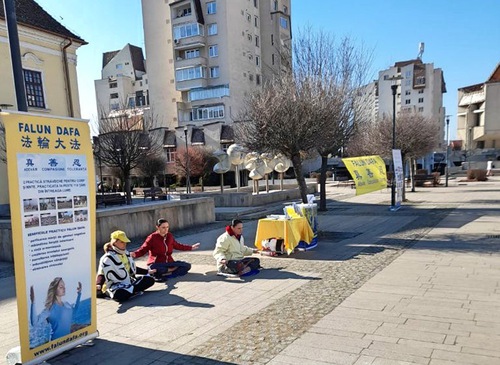 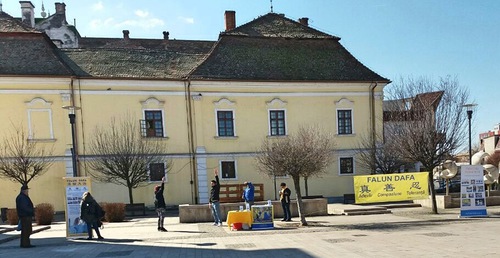 Some passersby stopped to learn the exercise movements while others read the Falun Dafa informational materials on display.

It is still cold in Târgu Mureș in March and, despite the sun, people were still dressed for winter. As practitioners gave out Falun Dafa brochures, they told the recipients about the cultivation practice.

An elderly woman was keen to know more about Falun Dafa after taking a brochure.

Practitioners told her about its amazing health benefits and that the teachings are based on the principles of Truthfulness, Compassion, and Forbearance. Knowledge of the principles helps people deal with their problems and helps them maintain a positive attitude.

The woman mused, “These are the most important things in life—everyone should pursue such values.” She understood that practicing Falun Dafa helps one become a better person.

A man who took a brochure saw photos of people doing the exercises outdoors. He asked if Falun Dafa had anything to do with the divine. Practitioners shared with him their understandings of the teachings: “One’s religious belief, level of education, and social background do not matter. As long as one improves one’s character and behavior by following the principles of Truthfulness, Compassion, and Forbearance, the individual will become wiser, and his or her actions will align with heavenly principles. According to research, people’s physical and mental health improved after practicing Falun Dafa.” The man seemed genuinely interested and said, “Belief in God can help people improve spiritually.”

A woman who had just attended a bioenergy symposium accepted a flier about Falun Dafa and listened to a practitioner talk about the persecution in China. “I am looking for information like this,” she said. “I am interested in this.” She thought it was not a coincidence that she ran into Falun Dafa practitioners that day. Perhaps it was what she needed. 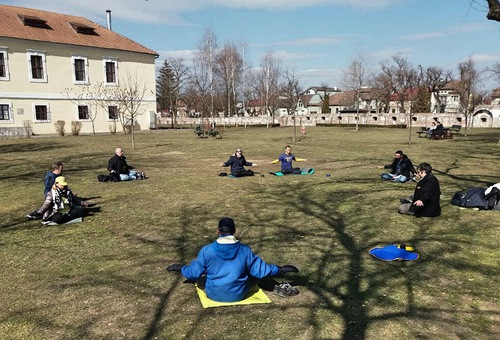 Practitioners demonstrated the exercises at the medieval castle in Târgu Mureș on March 13. 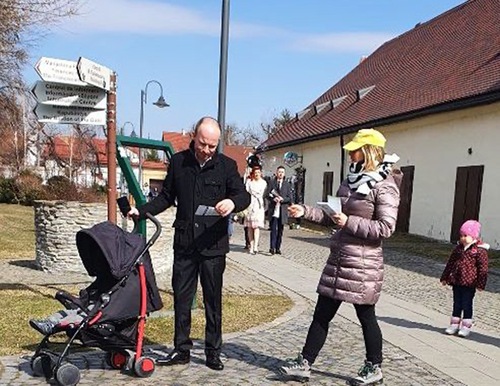 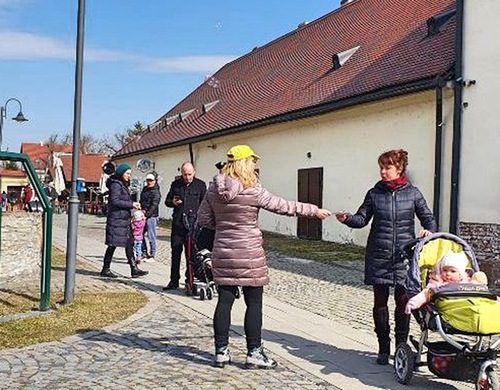 People take brochures and learn about the practice at a medieval castle in the city.

A woman asked if this was Falun Dafa when she passed by the information booth. She said she had heard about the Chinese Communist Party’s (CCP) persecution. Practitioners explained the CCP’s propaganda lies and that the regime is out to destroy traditional culture and moral values.

A tall, elderly white-haired man listened attentively as practitioners told him about the teachings and the persecution practitioners in China have endured since 1999 for refusing to give up their faith.

He expressed his thanks for the information, saying, “You have achieved your objective with this event because I learned something new.”