(Minghui.org) The Singapore Falun Dafa Association held a free Nine-Day Falun Dafa Class from March 12 – 20, 2022. Over the course of nine sessions, attendees watched the videos of lectures given by Falun Dafa’s founder Master Li Hongzhi and learned the five Falun Dafa exercises. At the end of the nine-day session, class members talked about their experiences as new Falun Dafa practitioners. 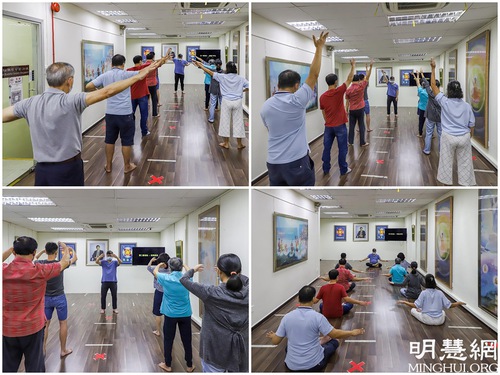 Attendees of the nine-day Falun Dafa class learn the exercises. 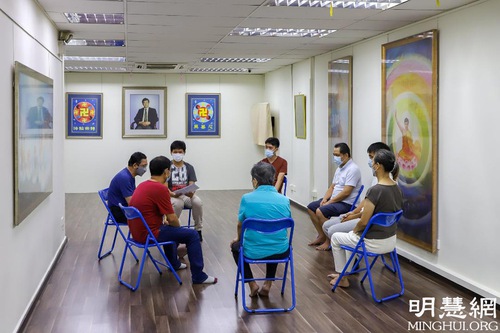 After attending the nine sessions, new practitioners reflect on their experiences.

“Falun Dafa Is What I Sought”

Mr. Lu, from China, said that he started practicing Falun Dafa after a Dafa practitioner called him and explained how to get around the CCP’s (Chinese Communist Party) Internet censorship when he was an undergraduate student in China. He said that he was grateful for the information, but he didn’t understand the spiritual practice.

He later learned that the CCP was murdering Dafa practitioners for their organs, which are sold for organ transplants. He was shocked. He wanted to know more about Falun Dafa so he downloaded the audio recording of Master Li’s teaching, and listened to it for two days. He said, “I felt that this was what I was looking for.”

Mr. Lu introduced Falun Dafa to his friends during a dinner but one of them called the police to arrest him. After that, the police often came to his home to harass him. Because he was a teacher, he clarified the truth to his students and played the video that analyzes and debunks the staged Tiananmen self-immolation incident. Mr. Lu explained that he wanted his students to think independently and not blindly believe whatever the CCP says. He was later reported and arrested.

Recounting how his home was raided, Mr. Lu said, “Twelve police officers came to my home without any official documents or search warrants. They rummaged through the place for more than an hour. They frequently returned to my home to harass me, and my family was terrified. They attempted to force me to give up practicing. In the end, I decided to leave China.”

After coming to Singapore, Mr. Lu saw the notice about the free nine-day Falun Dafa classes and decided to participate. He said, “I feel that Master is always guiding me.”

“It Is Right to Take This Step”

Mr. Jin talked about how he started to practice Falun Dafa. In 2020, he suffered from a serious illness and was ill for a month. He could barely eat or drink and lost six or seven kilograms. During that time he had the same recurring nightmare he’d had when he was a child. “In the dream there was a lifeless space,” he said, “a black void, that was terrifying. The nightmare seemed to remind me that I had something to do but it was not done.”

A few months later Mr. Jin came across information about Falun Dafa on the Internet. All the information he found was negative. He wanted to find out what Falun Dafa really was, so he read Zhuan Falun, the main book of Falun Dafa.

Mr. Jin said, “After I read the book, I realized that Falun Dafa is nothing like the negative information online.” He said that when he first started practicing, he was selfish and had strong desires. Certain thoughts kept popping up telling him not to practice Falun Dafa. But whenever he decided not to practice, he would feel regret and had a sense that he’d lost something.

So he picked up Zhuan Falun again. This state repeated itself several times. Then Mr. Jin found a local group of practitioners and began to do the exercises with them. He was very happy to have other practitioners to talk to and some of them suggested he attend the nine-day class.

Mr. Jin explained, “After the other practitioners helped correct my hand gestures during the classes, I felt more energetic. I used to have some pain in my hands, but after attending the classes, I feel more comfortable. Maybe Master cleansed my body. I’m also very happy to be here with fellow practitioners. It’s better than learning at home alone. It’s right to be here.”

Mr. Zheng, also from China, said that he practiced Falun Dafa by himself in the beginning and found it a little difficult. After he joined a local group practice site he felt better. The other practitioners told him about the nine-day session, and he found that it was easier to learn with others than by himself.

He said when he was in China he was misled by the CCP’s propaganda that defames Falun Dafa. After coming to Singapore, he learned that Falun Dafa is a great cultivation practice.

Ms. Yu participated in the previous nine-day session, and she was very happy to participate again. She told the others about her mother’s amazing recovery.

“My mother is in China and she is 87 years old,” Ms. Yu said. “My brother takes care of her every day, but she is getting older and sicker. My mother didn’t get up for three days, and my brother sadly asked me to come home to see her before she died. He said that he’d already bought the funeral shroud for her.

“On the third night that she was bedridden, my mother woke up and we had a video chat—but she could not speak or lift her head. I kept repeating, ‘Falun Dafa is good, Truthfulness-Compassion-Forbearance is good.’ The next day, our mother was able to eat, and afterwards, she kept improving. Now, she’s completely recovered.”

While she spoke, Ms. Yu excitedly took out her phone and showed a recent photo of her mother. The woman in the photo was smiling and looked cheerful. Sitting upright, she did not look like a critically-ill person. Ms. Yu said, “See, she is healthy and her complexion is good. Master saved her. Otherwise, she might have passed away.”

Ms. Tee attended the nine-day class accompanied by her son. She said, “I feel better and stronger. I couldn’t sweat normally before, but now I can.” She added that after participating in the classes, her headaches became milder and finally, they were gone after one night.

Mrs. Tee’s son, Victor, said, “I brought my mother but I also gained something.” Although he started practicing Falun Dafa in 2005, he said that this time while listening to Master’s lectures, “I heard more details and I’ve benefited a lot. While they demonstrated the exercises, practitioners checked my hand gestures and corrected some of my incorrect movements.”

The Singapore Falun Dafa Association is located near Kallang MRT station in Singapore. In order to help people learn Falun Dafa, a free nine-day introductory session is held every three months. Local practitioners wish to help more people become healthy, have a peaceful mind, and be uplifted spiritually. The classes are held for nine consecutive days from 7:15 p.m. to 9:45 p.m. The next nine-day class will be held from June 11 to 19, 2022. People who are interested are welcome to attend. Registration email: register@falundafa.org.sg

Minghui.org has confirmed the deaths of thousands of practitioners as a result of the persecution over the past 23 years, though because of the difficulty in getting information out of China, the actual number is believed to be much higher. Many more have been imprisoned and tortured for their faith.

“Cultivation Experiences of a Technical Practitioner”