(Minghui.org) Ms. Guo Xiuqing, a 70-year-old resident in Shouguang City, Shandong Province was sent to the Shandong Women’s Prison in 2018 to serve a 7-year term for practicing Falun Gong, a mind-body practice that has been persecuted by the Chinese Communist Party since July 1999.

Once an inmate gave her an unknown pill to take and her face immediately turned pale and her lips turned purple. Her entire body was also shaking and she felt dizzy. She began to vomit as well. As she could not stand either, someone helped her walk to inmate “nurse” Li Yujie. Li handed her another pill and said, “Oh, it seems that drug was so strong that you got poisoned by it. Take this antidote for now and I will give you a less potent pill next time.”

Li was one of several inmate “nurses” in Division 11 of the prison, who had no medical training but were asked by the guards to dispense medicine, including psychiatric drugs, and perform other nurse responsibilities. Li was jailed for child abduction and later released in 2020. While still imprisoned, Li and other inmate “nurses” often forced detained practitioners to take unknown drugs in an attempt to make them give up their belief in Falun Gong.

More than 95% of the practitioners jailed in the prison were found to “have various health problems” after being forced to go through physical examinations upon admission. The practitioners were generally very healthy before their arrests, but they were forced to take medications, most of which were said to be blood pressure medicine. Most practitioners said they experienced discomfort after taking those pills.

The prison only had a few doctors so the guards assigned various criminals to be “nurses,” even though they had no medical training. Under the guards' instructions, these inmate “nurses” performed “physical exams” on detained practitioners and gave them medicine that often caused physical and mental damage.

Ms. Yang Jirong, a 77-year-old neurologist, was sentenced to five years and taken to the prison in 2019. She was forced to take “blood pressure” medication on the grounds that she had not completely “transformed” (given up belief in Falun Gong). She suffered from dizziness, memory loss, slow movement, drowsiness, and stomach discomfort afterward.

As an experienced neurologist, Ms. Yang knew what was given to her was not simply a blood pressure medication, but something, if overdosed, would lead to dementia. She expressed her concerns to the prison doctors and the inmate “nurses” many times that she did not have high blood pressure and that she should stop taking the medicine. But she was told that not cooperating with the “medical treatment” would be the same as failing to “transform” completely.

When Ms. Yang approached the guards, they referred her back to the prison doctors. One time in the name of bringing Ms. Wang for a checkup at a hospital, the inmates’ “nurses” removed her pants and pushed her down to the ground outdoors, exposing her to the elements in the freezing winter for over one hour. After returning to her cell, she was forced to take the same dose of the “blood pressure” medication. The prison doctors and inmate “nurses” even claimed she had a mental disorder and threatened to increase the dosage. After several years, a once elegant, well-respected neurologist was reduced to a person with a dull look and worn-out expression on her face.

A Special Group of Victims

One example was Ms. Zhang Min, a practitioner from Weifang City. Hardly anyone went to visit her and nobody deposited money into her account, so she was one of the victims forced to take “supplements.” She protested out loud that she was normal and did not have any mental illnesses. But nobody listened and the forced-drugging continued.

For practitioners who had stopped practicing under pressure, they may also be forced to take “supplements” if their “transformation” was deemed not thorough enough. Here we would like to advise family members of the detained practitioners to visit their loved ones from time to time – for example, once a month – to prevent such tragedies from happening.

No practitioner was allowed to bring water out of the prison when being released. The guard at the gate would dump all the water in each released practitioner’s bottle. Even some inmates who assisted with the persecution did not know why.

As the practitioners drank such hot water laced with drugs over the years during their imprisonment, they gradually developed various symptoms, including 1) drowsiness, fear, and memory loss; 2) stomach bloating and indigestion; 3) inability to wake up, blurred vision, palpitation, suffocation, and psychotic episodes; 4) stiff and cold limbs. One practitioner already had stiff limbs and had trouble turning her body during sleep while in prison. Three years after she was released, she still did not fully recover her memory. Her family said that she could not remember any of the places that they had visited together. Her legs were also severely swollen.

Those to be released usually got a chance to clean up the lobby. They said that they saw the guards bring their own bottled water to work every day. There were also inmates who had been to the guards’ offices and saw water coolers there. In other words, the guards either drank bottled water or the water from the water cooler. The thermoses were only used to deceive the practitioners into drinking the hot water with toxic drugs in it.

Other Types of Abuse

In Division 11 of the Shandong Women’s Prison, drugs used for psychiatric abuse were readily available. But when practitioners indeed became sick, medication suddenly became very limited or unavailable. Once a tall practitioner had severe lower back pain, making it hard for her to stand or walk. It was not until she begged the guards many times that she was allowed to be led by an inmate to the prison hospital. A prison doctor asked if she had “transformed” first. He then felt her lower back with her winter coat on and said, “This is a lumbar disc herniation. There is nothing I can do – you just have to wait until you are released and get treatment elsewhere.”

Dental care was also used as an excuse for abuse. An elderly practitioner from Shouguang City was detained right after purchasing a denture but before the final adjustment was done. As a result, her denture was loose and kept falling out when she opened her mouth to talk.

According to the prison policy, anyone seeking dental care must have at least 3,000 yuan in her commissary account and wait for one or two months to get an appointment. When it was finally her turn to see the prison doctor, he glued her denture to a good tooth and charged her over 600 yuan for that quick fix. In the following few years, the denture moved around in her mouth, making it even harder to brush her teeth. Later on, the good tooth was also loose and the entire denture hung in her mouth. She tried to make another appointment to see the doctor again, but she was told that nothing could be done and that she should wait until she got released.

Mealtime in the prison was very limited, but the vegetables were not finely cut or well-cooked, making it very difficult for elderly practitioners to chew fast enough. One time a practitioner found a tooth missing after eating the half-raw vegetables. Many other practitioners encountered a similar situation when they swallowed their teeth while eating. This particular practitioner went to see the doctor, and she was told that all her teeth needed to be removed and replaced with a denture. She declined. Many elderly practitioners ended up getting a whole mouth denture in the prison, but it never really worked because they were not allowed to see the doctor often enough to adjust or maintain the denture. They spent the money (more than 3,000 yuan for each denture), but got something useless.

There were also other types of physical abuse. After being tortured and injured, practitioners faced further abuse and humiliation by inmates. After Ms. Zhao Jihua, already in her 60s, was sent to the prison, inmate Jiang Ping was authorized by the guards to beat her up in her cell every day. Since the beating sound was too loud, Jiang sometimes dragged Ms. Zhao to a restroom nearby and severely beat her there.

Once during a blood sampling, several inmates beat Ms. Zhao and swore at her. No guards stopped them. Seeing Ms. Zhao not yielding, the guards and doctors instructed inmates to add nerve-damaging drugs in Ms. Zhao’s food. This led to her mental disorder, making her emaciated and extremely weak.

Ms. Bi Jianhong, a practitioner from Yantai City, went on a hunger strike to protest the abuse. She was dragged to the prison hospital for forced-feeding every day. Prison doctors usually instructed inmates to force-feed her. Every now and then, a doctor would yell, “Whoever has not practiced inserting force-feeding tubes, you can come and practice it!” With no training, some inmates inserted the nasal tube recklessly, causing tremendous pain to Ms. Zhao. There was a practitioner who died after the tube was inserted into her lung. 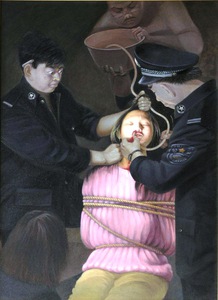 When Ms. Meng Qingmei called out “Falun Dafa is good” on May 12, 2020, guards put her in solitary confinement as punishment. In the name of treating her illness, the guards later took her to the hospital for intravenous injections. Inmate Shuang Shuang (from Zibo City, sentenced to five years due to fraud) claimed that the needle was inserted into the wrong place and asked the doctor to pull it out to insert again. This happened several times. They also asked some other inmates to practice needle insertion on Ms. Meng.

After the coronavirus pandemic broke out in late 2019, Division 11 and the hospital used another tactic to abuse practitioners. In the hot summer, they had elderly practitioners wear thick cotton masks. They later gave out thinner masks, but the strings were so thin that they hurt the ears a lot. The practitioners were also forced to do numerous coronavirus tests and get vaccinated. Ms. Yang Xiaoqin, a practitioner in Jining City, refused to get the shots and was kept in solitary confinement until she was released.

Division 11 of Shandong Women’s Prison is very vicious. Practitioners held here usually had no clue of where the injured practitioners were taken for “treatments” or how the bodies of those beaten to death were transported out.

Outside the Division 11 compound is a road. If one turns right and makes a left at the end of the road, they will see a few large trash cans, not far from which is a metal gate that is usually guarded. Inside the gate is a basement where some practitioners were tortured, with blood splattered on the walls. Some practitioners were beaten to injury, disability, or death here. Other than guards or inmates involved in the torture, very few people knew about the secret basement torture chamber.

The above is only some information I had seen and heard when being detained at the Shandong Women’s Prison. Due to the tight information blockade, there could be more hideous stories happening in the prison.