(Minghui.org) Janett, who lives in Gothenburg, Sweden, had cancer four years ago. In 2019 she endured surgery and chemotherapy, but her condition did not improve. The side effects of chemotherapy made her miserable and her health continued to deteriorate. Losing hope in Western medicine, she decided to try traditional Chinese medicine. She had hopes for a speedy recovery.

Fast forward four years and Janett says she has a new outlook on life. She has completely recovered from cancer and feels reborn. How did this happen? Did she really find a good Chinese “medicine?” 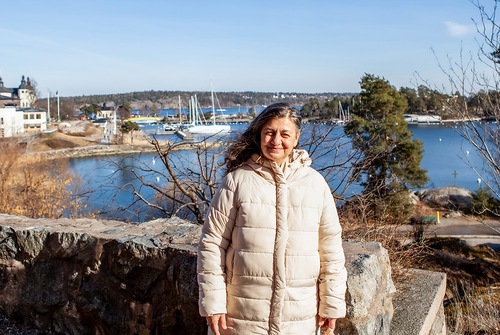 Janett has a new outlook on life after completely recovering from cancer.

Janett explained her transformation. “I began to practice Falun Dafa (also known as Falun Gong). It is a miracle and I feel blessed!” she said with a smile. “I had been looking for ways to improve myself spiritually since I was in my 20s. I had been to many places and tried many different things, but I was always disappointed. When I heard about Falun Dafa, I was excited. It turned out that I finally found what I was looking for!”

Janett is a teacher with decades of experience. She has two sons and two granddaughters. She’s worked hard and lived a fulfilling life. But when she was diagnosed with ovarian cancer, her life was upended.

“I had surgery in 2019 followed by three rounds of painful chemotherapy over three months. When the doctor suggested a fourth, I almost collapsed! I was mentally and physically exhausted, so I refused.” Janett said that she no longer had faith in Western medicine. She was pessimistic and confused.

When her situation seemed hopeless, good fortune awaited her. Janett soon found a Chinese medicine clinic whose physician, Dr. Wang, is a Falun Dafa practitioner. At Dr. Wang’s recommendation, Janett attended a workshop to watch videos of a series of nine lectures given by Master Li Hongzhi, the founder of Falun Dafa. The workshop was hosted by local practitioners in 2020.

Janett couldn’t hide her joy as she described how she felt while attending those classes two years ago. “The session was held in February 2020. I had a wonderful experience and witnessed the miraculous and extraordinary power of Falun Dafa. What a miracle!” 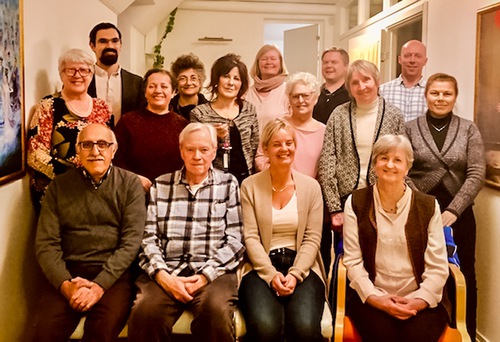 Falun Dafa lecture series attendees. Janett is the second from the left in the third row.

Janett recalled, “As I sat there, I forgot all the pain and my troubles. On the first day, even before the video started, I clearly felt energy enveloping my body—my entire body was hot.

“During those nine days, I felt that the energy was getting stronger, my mental state was getting better day by day, and finally, all the discomfort disappeared. All the bad things in my body were cleaned up, and I felt purified from the inside out. I felt great—a feeling I had not had since before I’d become ill. It was a happy and beautiful experience that I will never forget.

“After attending the nine lectures, I realized that all the misfortune and pain I’d encountered were preparing me for this day. I am glad that I have the predestined relationship to practice Falun Dafa and live by the principles of Truthfulness-Compassion-Forbearance. I am very grateful for everything Master Li has done for me.”

Janett also said that, after listening to Master’s lectures and reading Zhuan Falun, the main book of Falun Dafa, she understood that the root cause of people’s health problems is karma and that we suffer because we are repaying our karmic debts.

“When I was going through the pain and karma elimination, I felt that Master’s law body was right next to me, protecting me the entire time. I felt at ease and very happy.

“Shortly after I began practicing, my cancer symptoms seemed to return, and I felt very tired. One day, images suddenly appeared in front of my eyes: I saw a lot of black things packed inside a garbage bag. I understood that this garbage was the bad things being thrown away and that Master was helping me clean up and purify my body.”

The images Master Li showed her gave her hope and confidence. She suddenly felt a powerful energy surrounding her. With Master Li’s help and blessing, she quickly passed this tribulation. Afterwards, she felt relaxed and happy.

She said, “My personal experience matches what Master said in Zhuan Falun, and I believe that everything he says is true. I will work hard to assimilate to Falun Dafa's principles of Truthfulness-Compassion-Forbearance.”

Life Gets Easier after Changing Our Notions

Janett says that she follows Truthfulness-Compassion-Forbearance in her daily life and keeps looking within to find and get rid of her shortcomings. This has helped her to improve in all aspects of her life and work. Especially when it comes to getting along with her family, when she looks at issues from a different angle, she feels calm and relaxed.

Before she began practicing, Janett, who was a teacher for decades, was used to correcting others. Her eldest son had a successful career and was married and had children, so she did not worry about him, but she was concerned about her younger son.

“In order to help him I tried to give him advice and encouraged him to study hard, but it backfired. He disappointed me. I often criticized him and even lost my temper.”

After she began to practice Falun Dafa, she began to reflect on her behavior, search for her own attachments, and work hard to eliminate them. “As my forbearance and compassion increased, my younger son gradually changed. This year he passed his tests and was admitted to a good high school.”

She said that her sons are like mirrors, reflecting many of her attachments. “I used to hate how strict my father was when I was a child. Since I became a practitioner, I can understand him. I now visit him and care about him. He is very happy about that. I was also dependent on my sister. When I realized this, I corrected my behavior. I started being more considerate of her. I no longer bother her if I can handle something myself. Now our relationship is even closer than before.”

Janett has not only recovered her health but has also become calm and peaceful, and her relationships with her family members have improved. Her sister’s family also says that she is completely different. The people she knows have witnessed the extraordinary power of Dafa with their own eyes and learned about the Chinese Communist Party’s (CCP) persecution of Falun Dafa, which has been ongoing since 1999.

According to Dr. Wang from the Chinese Medicine Clinic, after Janett attended the nine-lecture session, she would never need to be treated again. Now, every time a session is held locally, Janett goes, whatever the weather. Like other Dafa practitioners, she participates in different truth-clarification activities and tells people about the CCP’s persecution.

This year marks the 30th anniversary of Falun Dafa’s public introduction. Janett said, “Words are not adequate—I cannot find words to describe my reverence and gratitude to Master Li Hongzhi. I want to share with the world my miraculous experience. I hope that everyone will come to learn about Falun Dafa, truly distinguish right from wrong, and choose a bright life path for themselves in this complicated and troubled world.”

“I Clarified the Truth for Five Hours at a Police Station”