Home > Persecution > Deaths Due To Persecution > Reports of Death Cases
Liaoning Man Dies of Lung Condition Caused by Torture 14 Years Ago in a Labor Camp
March 20, 2022 | By a Minghui correspondent in Liaoning Province, China

Mr. Zhang Guoyu has suffered repeated arrests, detention and torture ever since the Chinese communist regime began to persecute Falun Gong 23 years ago. While serving his second labor camp term, he was stretched into an excruciatingly painful position for nine days and suffered severe lung infection.

Mr. Zhang suffered another round of harassment in 2021, causing him much mental distress, and his lung condition relapsed. He had fluid accumulation in his abdomen, which further caused multiple organ failure. He passed away on January 18, 2022. He was 50 years old. 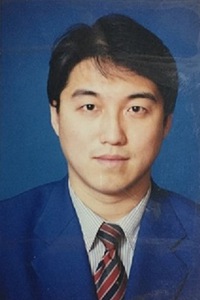 Mr. Zhang and his wife Ms. Shen Lian both worked at a communication company in Dalian City, Liaoning Province. They won many awards and were spoken highly of by their colleagues.

As a customer service manager, Mr. Zhang often landed an extra hand to his customers, including lending 3,000 yuan from his own pocket to an elderly man who was once struggling with his finances.

First Labor Camp and Fired from Their Jobs

After the persecution started, the couple went to Beijing in 2001 to appeal for the right to practice Falun Gong, only to be arrested. Mr. Zhang was given two years of forced labor. When both of them were detained, their preschooler son was left at home without parental care.

At Yaojia Detention Center, because Mr. Zhang refused to wear an inmate name tag, the guards put him in solitary confinement and instigated other inmates to beat him. They handcuffed him to a bed, covered his head with a helmet and beat him. His legs were severely injured and he was unable to get off the bed afterwards. The guards handcuffed him so tight that his fingers were still numb a month later.

Mr. Zhang was forced to lie in bed for over 20 days, with no bedding or blanket. The only time he was allowed to get off was to use the restroom and have meals, which was less than one hour each day. He wasn’t allowed to wash himself or change clothes. When he was finally let off the bed, his hands and feet were severely swollen due to poor blood circulation.

With the persecution policy to “ruin their reputations, bankrupt them financially, and destroy them physically,” the communication company fired both Mr. Zhang and Ms. Shen. They appealed with the labor arbitration department, the local court and intermediate court, but to no avail.

Mr. Zhang was arrested again on September 12, 2006, only one week after he started working at a new company. Officers from the Jiaojinshan Police Station ransacked his home, confiscated his printer, household registration, IDs, a plaque that said “Truthfulness, Compassion, Forbearance” (the principles of Falun Gong) and photo of Falun Gong’s founder. Shortly after, he was given another two years of forced labor.

Taken to Forced Labor Camp in 2007

Mr. Zhang was taken to the Benxi Forced Labor Camp in 2007 by officer Wang Shiwei. In the beginning, the guards pretended to be nice to him and offered him to make phone calls to his family.

When his family travelled from Dalian to visit him in September 2007, guard Liu Shaoshi asked several other guards and former practitioners who had been coerced into renouncing Falun Gong to be part of the meeting. Liu claimed that Mr. Zhang had to be responsible for his family and hinted for his family to persuade him to give up practicing Falun Gong.

As Mr. Zhang refused to compromise, Liu eventually cut off his communication with his family. When they came to visit him again, Liu denied their meeting request. The same also happened to other practitioners who remained firm in their faith. Even when their families travelled all the way to the labor camp during the freezing winter, Liu wouldn’t allow them to see their loved ones.

Shortly after the 2008 Chinese New Year, guard Liu said to Mr. Zhang, “I just talked to your mother. Your father was so upset about you that he died.” Then another guard Guo Tieying spread rumors about Mr. Zhang and criticized him for causing his father’s death. When Mr. Zhang was later released, he learned from his mother that his father was depressed about his son's incarceration and passed away due to a heart attack.

In early March 2003, guard Zheng Tao said to Mr. Zhang, “You must give up Falun Gong. I’m announcing a war against you on behalf of the legal center.”

Mr. Zhang replied, “We are Falun Dafa practitioners. We follow the principles of Truthfulness, Compassion, Forbearance. We don’t have any enemies. It doesn’t make sense for me to get into any war.”

Stretching Torture – Similar to “the Rack”

When such deceit and emotion failed to shake a practitioner's faith, guard Liu began to use the method of extreme stretching to torture them.

The stretch torture was widely used by the guards at the Benxi Forced Labor Camp, as it didn’t cause many visible external injuries to the practitioners, but the internal damage was beyond measurement.

The guards put two single beds together and fastened the practitioner's four limbs to the corners of the two. They initially handcuffed the practitioners to the bed, but later changed it to ropes, after the handcuffs cut into Mr. Wang Xuefei’s wrists and caused external injuries.

Every now and then, the guards either tightened up the ropes or pulled the beds further apart, keeping them apart by filling the gap between them with bricks. The result was something similar to “the rack” seen in Hollywood movies.

In some extreme cases, the guards tied the practitioners’ four limbs to the higher part of the bed frame and left their bodies hanging in the air. Because one practitioner ended up in a vegetative state from this torture, they later stopped using it, devising a more devious means to inflict suffering without the risk of going too far. 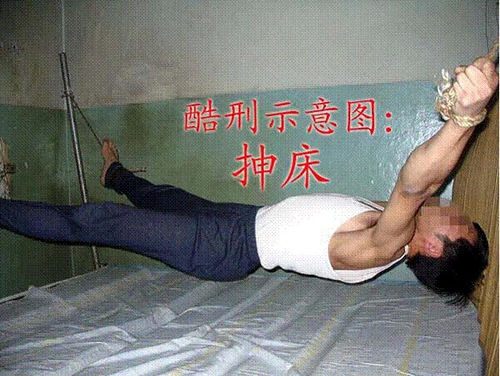 On March 11, 2003, the guards put Mr. Zhang in solitary confinement. Three days later, they tied him up in the “extreme stretch” position for nine days. They planned to keep him tied up for a longer time, hoping it would force him to renounce Falun Gong and provide information about other practitioners.

Mr. Zhang suffered a persistent high fever for a week before his temperature finally returned to normal after being given three bottles of IV drips every day. Unable to bear the persecution anymore, he wrote a statement to renounce Falun Gong against his will.

When Mr. Zhang’s brother came to visit him in early April, guard Guo Tieying said to him that because Mr. Zhang didn’t sing the required song or follow the rules, they put him on strict management – which was merely having some classes in the morning and then do some light labor in the afternoon. Having believed the guards, many practitioners’ families didn’t believe the torture they were suffering there but felt assured to let the guards take charge of their loved ones.

On July 11, 2003, Mr. Zhang and another practitioner Mr. Song Jiwei wrote a solemn statement, nullifying the statement they wrote before to renounce Falun Gong. The guards put them into solitary confinement three days later. Mr. Song was kept there for nine days and Mr. Zhang for fourteen days.

During the period, the guards often came and threatened to stretch them again, but they weren’t deterred.

After Mr. Zhang was released in September 2008, the authorities continued to harass him and his wife from time to time. He lived in fear and tremendous distress. His lung condition relapsed in 2021 during the latest round of harassment. He had fluid accumulation in his lung and abdomen and died from multiple organ failure at a hospital on the early morning of January 18, 2022.

“Podcast (Cultivation): “Those Around Me Benefit from My Practicing Falun Dafa””

“Master Is Protecting Me at All Times”