(Minghui.org) Practitioners in Latvia set up a booth in Riga’s Old Town near the Freedom Monument on February 26, 2022. They demonstrated the exercises, introduced Falun Dafa to the public, and told them about the ongoing persecution in China by the Chinese Communist Party (CCP).

Pre-dating Europe’s Middle Ages, Riga is the capital of Latvia. It is a major political, economic, cultural, educational, and business center in the Baltic region. Despite the bitterly cold winter weather many passersby stopped and talked with practitioners. 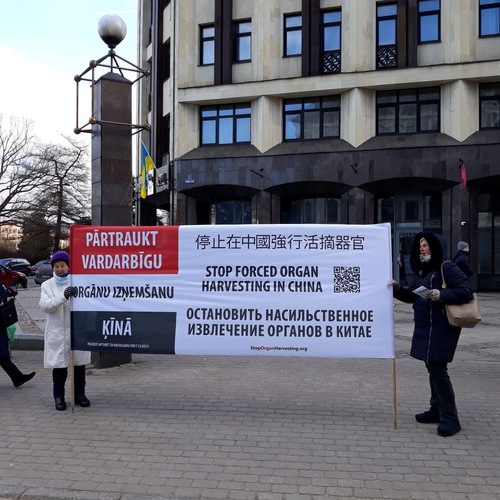 Practitioners held an information day in Riga, Latvia, on February 26, 2022 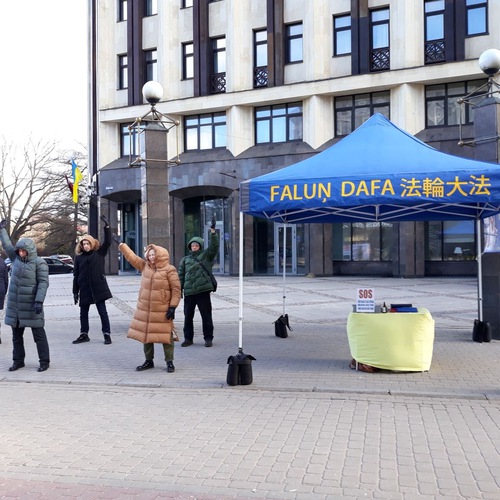 When they learned how the CCP persecuted Falun Dafa practitioners since 1999 for their belief in Truthfulness-Compassion-Forbearance, many people were shocked and signed a petition calling to end the brutality. 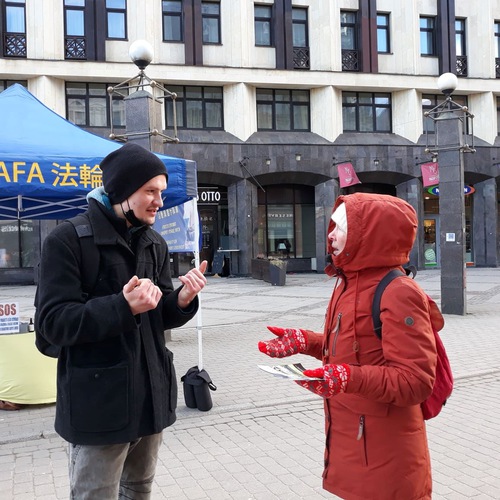 Bruno (left), stopped to talk with a practitioner and asked for more information.

When Bruno noticed the booth he stopped and talked with a practitioner for a long time. He was surprised by the brutality in China especially organ harvesting from living practitioners.

“The persecution is wrong and what you are doing is very important,” he said. “It is important to inform the public of what is going on,” he added.

“We need more good people in the world,” Bruno explained, “Regardless of our religion, nationality, or race, first and foremost, we need to be people who are willing to make this world a better place.” He said that is not easy and it starts with every one of us.

He added, “It requires efforts to safeguard principles. But even under adverse conditions, we should still strive to be good people.” Upon leaving, Bruno thanked practitioners for their perseverance and wished them well.