(Minghui.org) Falun Gong practitioners held activities to introduce the spiritual practice to the public at Central Park and Marasti Square in Romania’s Cluj City from February 25-27, 2022. They talked to people about the Chinese Communist Party’s (CCP) almost 23-year-long campaign of persecution against Falun Gong and collected signatures to call for an end to China’s human rights abuses against practitioners. 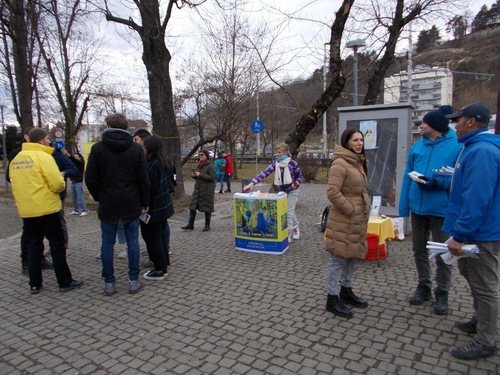 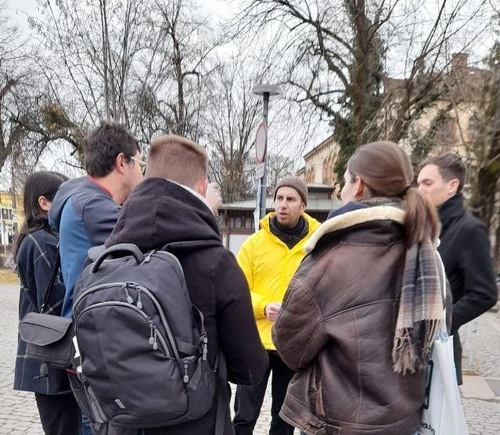 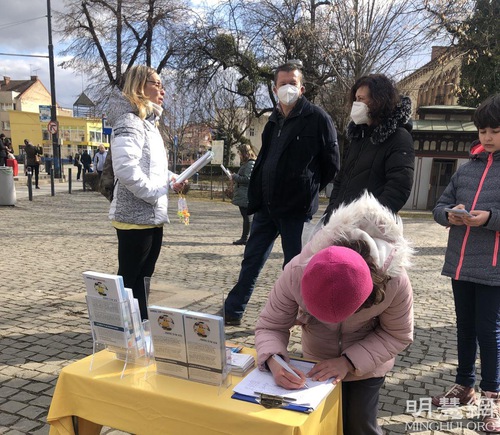 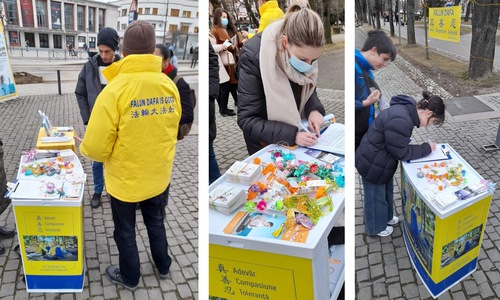 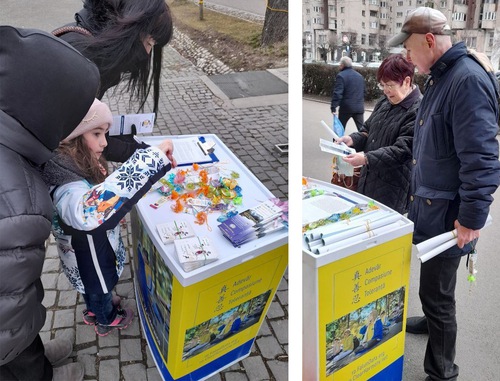 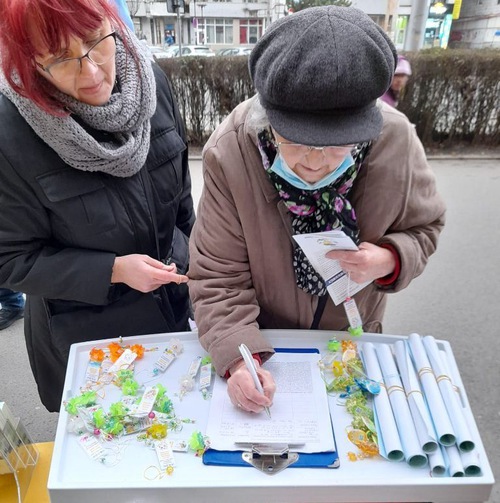 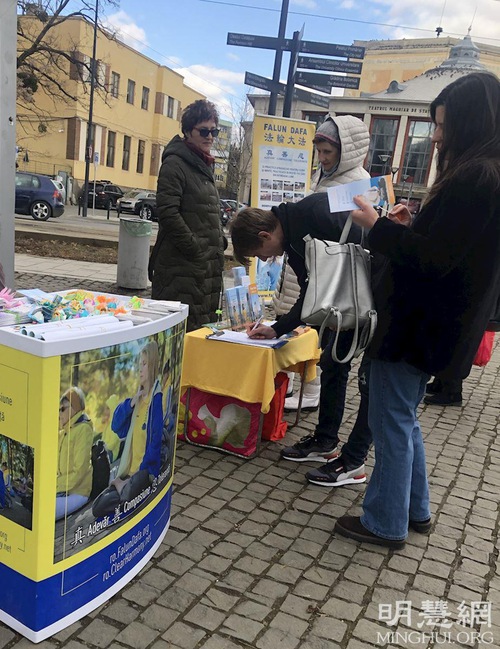 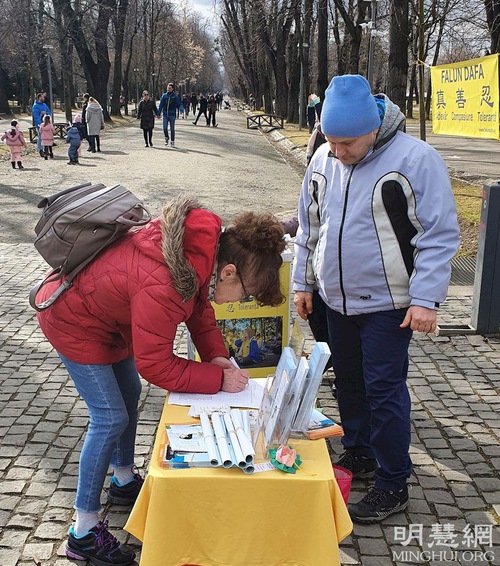 Petition Calling to End the Persecution

Local people who passed by the activities willingly accepted information materials and asked questions about the persecution in China. Those who were hearing about Falun Gong for the first time were surprised to learn about the persecution in China. Many people were convinced that the CCP was capable of any evil, as they remember the crimes that the Communist Party of Romania committed against the people.

Some people already knew a little about Falun Dafa (also known as Falun Gong) and were happy to receive paper lotus flowers and information materials from practitioners. They signed the petition calling on the CCP to stop the persecution. 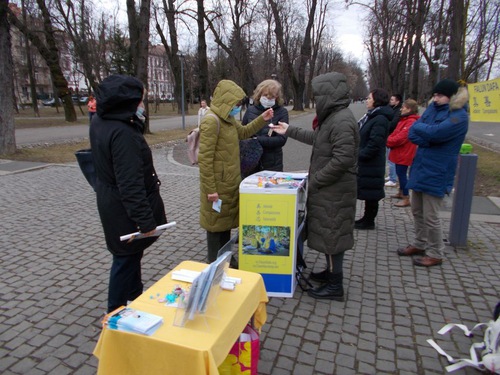 A passerby accepts a paper lotus flower and some informational materials

One woman said that she had read Zhuan Falun, the main book of Falun Gong and that she wanted to go to the park to join the group practice.

Another woman read the banner and then said, “Truthfulness-Compassion-Forbearance is too graceful!” Two women who were learning about the CCP’s persecution of Falun Gong for the first time asked what they could do to help stop it.

After learning about the CCP’s persecution of Falun Gong, Emilia signed the petition in Marasti Square. “I am saddened by what has happened. How has humanity become so bad,” she said.

Refugees from Odessa in Ukraine, Gerard and Victoria listened to a practitioner explain Falun Gong and the CCP’s persecution. Each of them took a lotus flower. The practitioner encouraged Victoria by telling her that wherever she is, she must remember these three words: Truthfulness, Compassion, and Forbearance. The Ukrainian woman nodded in understanding and gratitude.

On February 27, two women in Cluj’s Central Park watched Falun Gong practitioners do the exercises and expressed interest in learning. When a practitioner told them that the persecution was still taking place in China, they asked why the CCP would persecute Falun Gong. The practitioner told them that Jiang Zemin, the former head of the CCP, was very jealous of Falun Gong. Before the persecution began in 1999, hundreds of millions of people were practicing Falun Gong in China. The two women nodded in understanding. 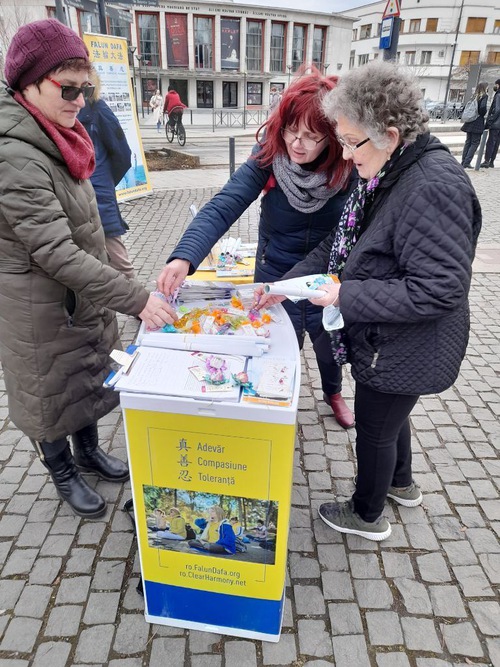 Parents and Children Learn About Falun Gong in the Park

Several children who saw the Falun Gong display board in Central Park brought their parents over to the stand. 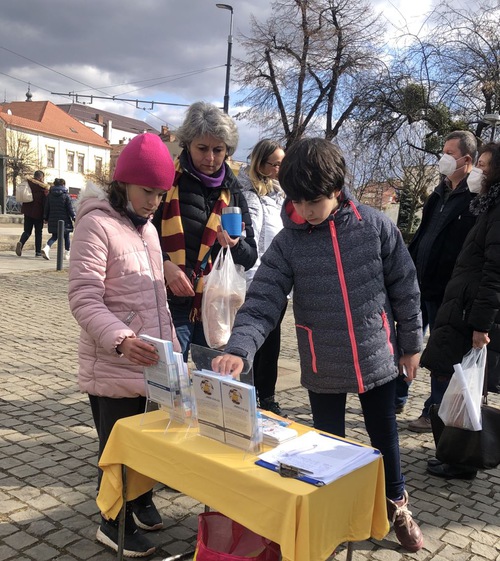 A woman approached the stand with her daughter, who was about eight years old. The woman said that she was curious about what was going on because her daughter was interested in the event. The practitioner explained Falun Gong to the woman and asked her daughter to choose a lotus flower.

“I Found Someone Who Understands Me”

A 60-year-old man approached the stand. When he listened to a practitioner explaining Falun Gong, he didn’t understand at first, and so he asked, “What do we have to do with the Chinese? Our Romanian culture is very beautiful, and it is very different from Chinese culture.”

The practitioner told him that it was normal to have cultural differences. China has 5,000 years of splendid civilization, but it has been systematically destroyed by the CCP. Hearing the word communism, his eyes and tone softened. He recounted the tragic experiences of Romanians under communism. He said that the world has changed a lot: people are pursuing fame, luxury cars, and famous products, but they are stingy and empty in their hearts. The world seems to have progressed, but we have lost our humanity.

The practitioner said that to a certain degree technology was starting to take advantage of humans, who are losing direction. The practitioner and the man had an in-depth conversation about what it means to be a human being. He asked, “Why is this world bad and selfish? How do we figure out what is good and what is bad in this chaotic world?” The practitioner opened a leaflet and showed him the principles of Truthfulness-Compassion-Forbearance, and told the man that this is the standard for judging right and wrong amid the chaos.

Seven or eight young people stopped to watch the event. One of them said something bad about Falun Gong. A practitioner politely replied, “What you said is not true. Falun Dafa is not a cult, but is a Buddhist school practice spread by the founder of Falun Gong in the world.”

The practitioner then gave them each a leaflet and told them that Falun Gong information can be found on the www.falundafa.org website in their native language. The practitioner reminded them to not be misled by the CCP’s propaganda 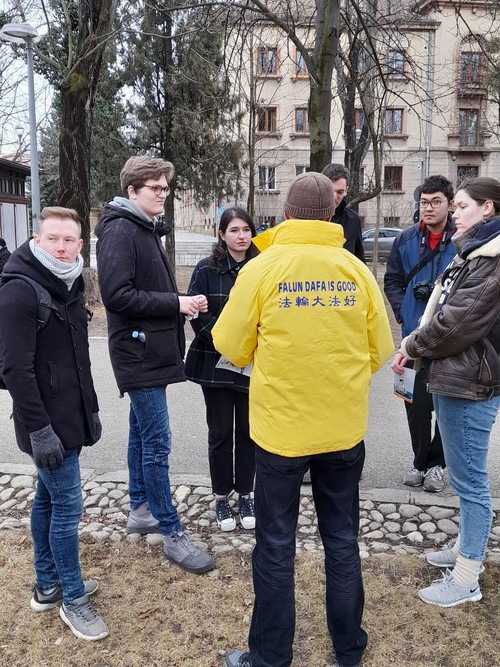 Young people learn about Falun Gong and the CCP’s persecution

The practitioner told the young people that people practice Falun Gong for better physical and mental health and to be better people who follow Truthfulness-Compassion-Forbearance. Practitioners all over the world offer free exercise instruction.

After listening to the practitioner’s explanation, the young people explained that they were students from several countries, including Estonia and Bulgaria, and they were traveling in Romania. They wished to learn more about Falun Gong.

The students all followed the practitioner to the stand to get more information. They each took a lotus flower.

Background: What is Falun Dafa and Why is the CCP Persecuting it?

“Experiencing the Saving Grace of Dafa”