(Minghui.org) Today's news from China includes incidents of persecution that took place in 9 cities or counties in 4 provinces, where at least 11 practitioners were recently persecuted for their belief. 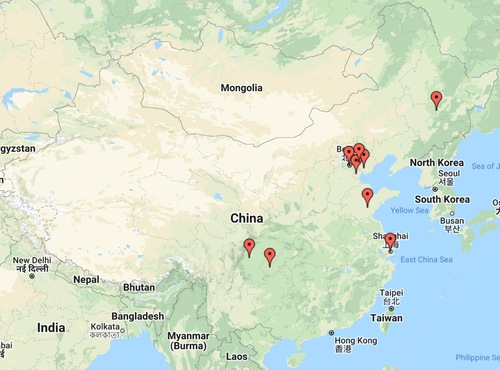 Mr. Liu Shangzhu, who lives in Jiayanzhuang Village, Woluogu Town, Yutian County, was arrested on May 12, 2021 and has been detained. He was tried in court on September 27, 2021, and was later sentenced to three years and two months in prison and fined 8000 yuan.

It was learned on February 18, 2022 that Mr. Liu has been taken from the Zunhua Detention Center to the No. 4 Prison in Jidong.

Ms. Wang Youping was harassed and taken to a brainwashing center in early 2020, and returned home two months later. However her friends and family have not heard from her since late July 2020. She has been missing for 20 months.

Mr. Zhang Xiuqiang from Yishui County was arrested at the Yishui Bus Station by Mengyin County police on February 8, 2022.

Ms. Zhou Meijuan, 50, from Anting Town of Jiading District, was framed by the principal of Anting Town Primary School, and sentenced to one and a half years in prison. During the Beijing Winter Olympics and beginning on February 4, 2022, Ms. Zhou was followed around by a young man who wore a red armband. The man waited in the security guard room of the residential community and followed her in a moped as soon as she went out. Sometimes he also arranged a courier person to join him to follow her. The surveillance on Ms. Zhou stopped after the Beijing Winter Olympics ended.

Ms. Jia Fengzhi was sentenced to three and a half years in prison and fined 35,000 yuan by the Pinggu District Court on September 7, 2020 for distributing truth clarifying calendars. She was detained for nearly two years in the Pinggu District Detention Center and was later transferred to the Tiantanghe Women’s Prison around November 18, 2021.

After Ms. Jia was imprisoned for 20 days, her family was informed on December 10, 2021, that Ms. Jia was taken to the ICU of Beijing Chaoyang Emergency Center. Her blood platelet count dropped to 20.

Mr. Jia Fengzhong was scheduled to be tried in the Zunhua City Court on March 11, 2022.

Mr. Zhou Xiangyang has returned to his hometown after seven years of imprisonment. Several surveillance cameras were installed around his home by local authorities, which cost several thousand yuan.

Ms. Zhang Yumei was reported to police for talking to people about Falun Gong. She was arrested by officers from the Qizhi Police Station on March 8, 2022. She is currently detained in the police station.

The next morning, March 4, approximately thirty officers came to her home. They ransacked her home and confiscated her Falun Gong books. Ms. Chen has now been placed under residential surveillance.

Mr. Zhang Yuhua from the Daxing District was arrested at home by officers from the Linxiao Police Station at around 3 p.m. on March 7, 2022. He was taken to the Dawa Detention Center in Daxing District that evening.

Ms. Yang Peili lives in Zhushui Village, Jinhaihu Town, Pinggu District. She was reported to police for distributing truth clarifying materials and was recognized by police via surveillance cameras. Officers from the Jinhaihu Town Police Station, led by village official Cao Quanjun, went to her home on March 4, 2022. Her home was ransacked, and she was taken to the police station for interrogation and released later that evening.