(Minghui.org) The Tian Guo Marching Band participated in the 171st St. Patrick’s Day parade in San Francisco on March 12, 2022. According to many spectators, the Falun Dafa practitioners’ entry in the parade was the most outstanding. 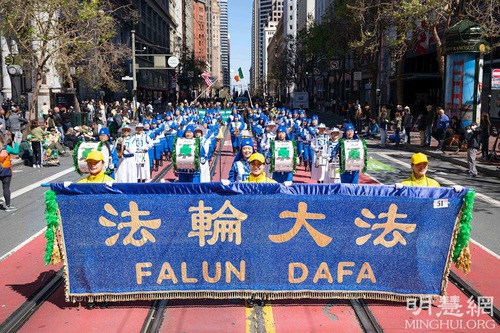 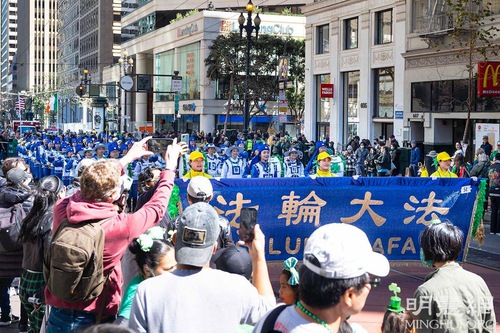 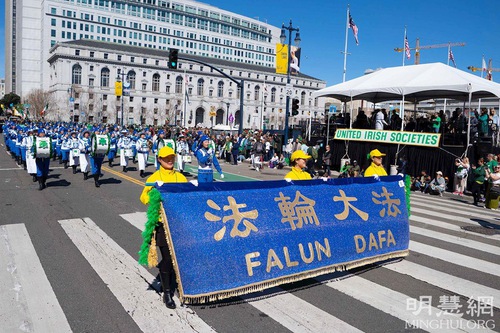 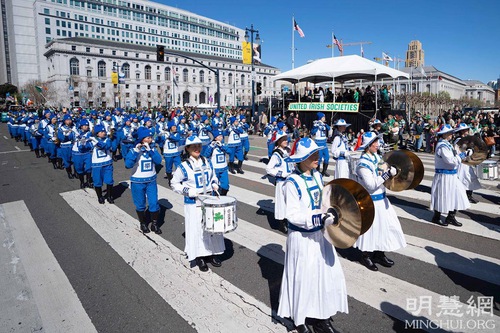 The Tian Guo Marching Band performs in front of the organizer's stand. 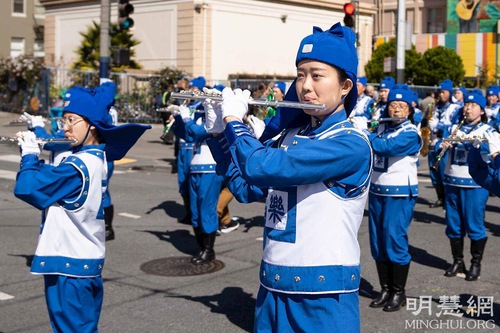 The Tian Guo Marching Band made up of Falun Dafa practitioners

This was the first St. Patrick Day's parade in San Francisco since the COVID outbreak. Both sides of the parade route were lined with people that day. Dressed in blue and white Tang Dynasty costumes, members of the Tian Guo Marching Band performed a variety of songs.

All along the parade route, spectators welcomed them warmly and many said Falun Dafa was the best entry in the parade.

“Falun Dafa Is the Best” 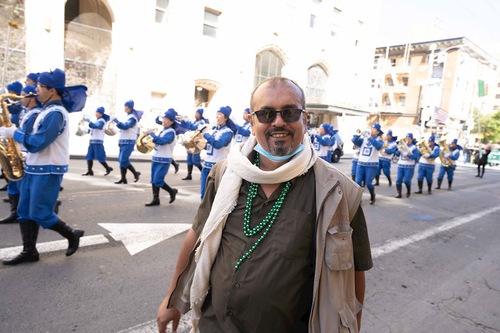 “Falun Dafa is the best group I've seen in the parade,” Salh Mohamud said. “I love this group. They are outstanding, excellent! I couldn’t help walking with them. I admire the majestic songs they played!”

Mr. Mohamud said that the practitioners' performance was of the highest standard. “The principles of Truthfulness, Compassion, and Forbearance are remarkable,” he said. “Thank you! The Chinese Communist Party (CCP) persecutes Falun Dafa. That is horrifying. I hope practitioners can be free to follow their belief.”

“This group is amazing,” said Mr. Pan from China who now lives in San Francisco. He took his daughter to see the parade. When he learned that the group was the Tian Guo Marching Band and the performers were all Falun Dafa practitioners, he said, “No wonder they are so precise.”

Then he added, “Falun Dafa is great! There is freedom and democracy in America. I made the right choice coming to the U.S. There is freedom in this country. I don't like the way things are in China now.”

When practitioners told Mr. Pan to remember “Falun Dafa is good, Truthfulness, Compassion, Forbearance is good” and he would be blessed, he said, “That's right!” 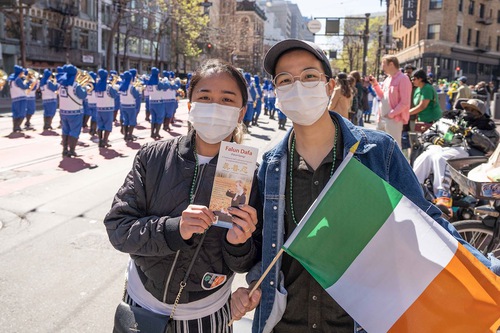 San Francisco residents Jam and Jade said practitioners can be seen all over the world.

Jam and Jade, who live in San Francisco, came out of their apartment to watch the parade. They loved practitioners’ performance. Jade said, “This is the most meaningful group we’ve seen in the parade. It’s beautiful! We were just saying that this band is so well trained, very orderly.”

Jam said she has seen Falun Dafa practitioners all over the world. “When I was in Australia, I saw people introducing the practice there. We heard that Falun Dafa is persecuted in China. The CCP should not do that. It is terrible that they take organs from practitioners by force and sell them for huge profits.”

“The CCP Is Criminal”

Jack brought his son to the parade. He said he loved the performance. “I lived in Hong Kong for 7 years. I know how the CCP persecutes Falun Dafa and harvests organs from practitioners. I don't like what the CCP does. The U.S should not buy its products, it should not give money to the CCP. Now the CCP has extended the persecution to Hong Kong and destroyed the island—so I left Hong Kong.”

Hirojo from Japan said, “I like the Falun Dafa group and the music they played.” When she read on the brochure that Falun Dafa teaches the principles of Truthfulness, Compassion, and Forbearance, she said, “It is beautiful. I love these principles.”

When she learned how practitioners were tortured in China and their organs were stolen, she said, “That is terrible. Everyone should have freedom of belief. I am glad that they can practice this freely in America.”

As the Falun Dafa contingent passed by, Al and his friend clapped. He said, “This band is excellent. I’ve seen them before in different parades. I admire the principles of Truthfulness, Compassion, and Forbearance. The CCP persecutes Falun Dafa—this shows that the CCP is criminal.”

“The Principles of Truthfulness, Compassion, Forbearance Are Important” 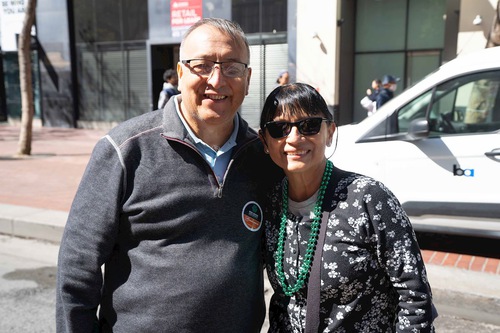 Carlos and his wife Maria from Peru.

Carlos Jo and his wife Maria Jo from Peru were in the U.S. on holiday. They loved the practitioners’ performances. Maria said, “The Tian Guo Marching Band’s performances are perfect, outstanding. We just arrived in San Francisco. This is the first time I’ve seen this group.”

She was moved by Falun Dafa’s principles of Truthfulness, Compassion, and Forbearance and said, “These are important, especially in today's world. We should follow this in our daily lives. I am thrilled to see this group today. I will read more about it when I get home.”

When she learned that Falun Dafa is persecuted in China, she said, “That is not right, it is evil. We should safeguard these principles.”

“[Selected Opinion Articles] Those Who Acquiesce Are Also Accomplices”