(Minghui.org) In North Rhine-Westphalia, the most populated state in Germany, Falun Dafa practitioners hold events almost every weekend in major cities such as Cologne, Düsseldorf, and Essen. They demonstrate the Dafa exercises, tell people how the CCP (Chinese Communist Party) persecutes practitioners in China, and collect signatures on a petition calling for an end to the atrocities. They also hold candlelight vigils in Düsseldorf’s city center. Through these events, many people in North Rhine-Westphalia have learned the facts about Falun Dafa and the ongoing persecution in China, and many have shown their support by signing the petition. 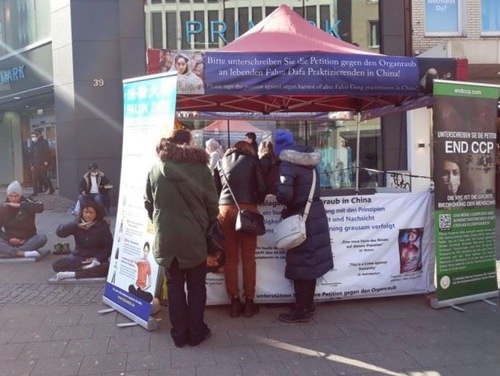 Passerby signs the petition at the Falun Dafa booth in Essen on March 5, 2022. 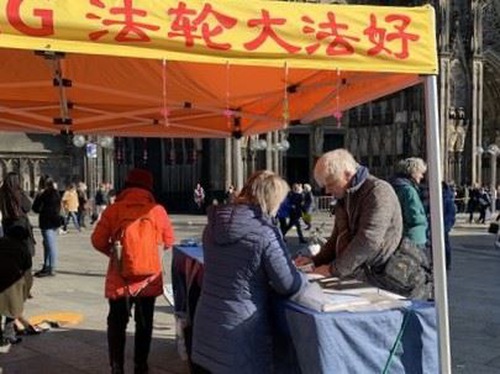 A man signs a petition in front of Cologne Cathedral on March 5, 2022, to stop the suppression in China. 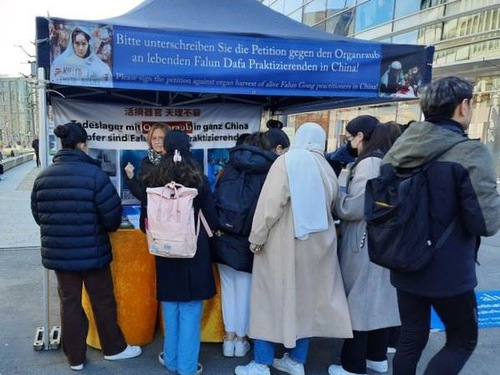 Pedestrians stop for information at the Falun Dafa booth in Düsseldorf on March 5, 2022, and sign the petition to condemn the persecution. 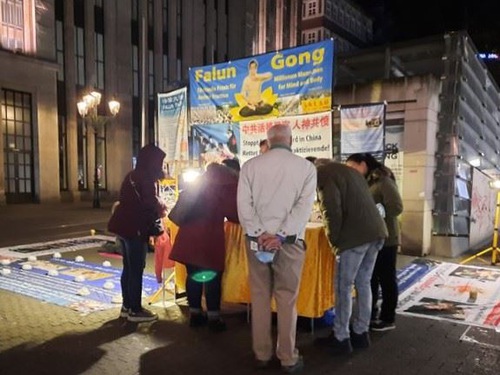 “Thank You for Coming Here”

A middle-aged woman from Italy learned about the persecution in China at the booth in Cologne. Tears came to her eyes as she listened. “How could the CCP be so brutal?” she asked while signing the petition. Despite the pandemic, she gave the practitioner a big hug and said, “Thank you for coming here!”

About half an hour later, the woman returned and told the practitioner, “I will tell my friends about this persecution. Could you give me some flyers so I can send them to my sisters in Italy?” Upon leaving with materials in Italian, she repeatedly thanked the practitioner.

When practitioners were demonstrating the fifth exercise, a woman in her 40s stopped by with her daughter, an elementary school student. “I can feel strong energy here,” she explained. “Instead of coming from the Cologne Cathedral, the energy comes from you.”

As the woman talked with practitioners and asked questions, her daughter directly went over to another practitioner to learn the sitting meditation.

“It’s Time for People to Wake Up”

Practitioners in the Düsseldorf area hold information day events at the city center every Saturday. This past Saturday, a nurse came by with her daughter and 70-year-old mother. They said they have stopped and read the posters displayed numerous times, so they already knew how practitioners are abused in China, including the Chinese regime’s forced organ harvesting of prisoners of conscience.

The nurse remarked that she also knew how the CCP covered up the pandemic and misled the public. “It is clear the CCP regime is our biggest problem,” she said. After all three ladies signed the petition, the nurse added, “This is my country and my voice. I do hope the German Parliament will listen and take action.”

She was glad to hear that Falun Dafa is practiced in over 100 countries, and that practitioners around the world are telling the public what the CCP is doing in China. “It is like building a stone house – piece by piece, one stone after another, you will succeed,” she said. “Please keep it up!”

Then she added, “We need more and more people to sign these petitions. It’s time for people to wake up.”

At the practitioners’ booths in all three cities –  Cologne, Düsseldorf, and Essen – students and tourists from China often quit the CCP and its affiliated youth organizations when they learn about the regime’s crimes.

Three Chinese students came by the information booth in Essen on March 5. A practitioner told them how the CCP had harmed and killed innocent people, including Falun Gong practitioners. The practitioner also recommended that they renounce the CCP organizations for a better future. All three girls agreed to quit the CCP’s junior organization, the Communist Youth League.

A Chinese student who attends university in Cologne stopped to talk to practitioners. When a practitioner handed him a pamphlet outside Cologne Cathedral, the student said he already had the information, as practitioners were handing out information near the college.

He agreed to quit the CCP organizations and said, “We don’t want to die for the vicious regime.”