(Minghui.org) Heavy rain caused landslides in the state of Sao Paulo, Brazil, on January 30, 2022, killing at least 24 people. In the U.S., a violent typhoon-like bomb cyclone hit the eastern part of the country on January 29, causing a snowstorm. Thousands of flights were canceled and several states declared a state of emergency.

Heavy rains caused landslides in the state of Sao Paulo, Brazil, early on January 30. At least 24 people were killed and about 660 families were evacuated. Heavy rain is forecast for the next few weeks.

A landslide in the inland city of Várzea Paulista in the state of São Paulo killed five people, including three children. 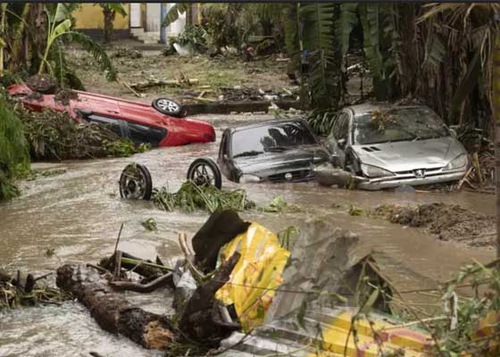 In addition, the Represa Paiva Castro reservoir between Franco da Houxia and Mairiporã is at 81.6% capacity. The local authorities may be forced to open the gates to release the floodwaters. The public has been notified to evacuate.

An official from Brazil’s National Meteorological Institute (Inmet) weather forecasting department said that heavy rains will continue in southeastern Brazil over the next few weeks, with daily rainfall of up to 100 mm, and landslides may occur in some areas.

A typhoon-like bomb cyclone occurred in the eastern United States on January 29, causing a snowstorm. The media reported that the winter storm swept across at least 10 eastern states and affected about 70 million people. Bad weather caused more than 5,000 flights to be canceled. The governors of New York, New Jersey, Maryland, Rhode Island, and Virginia declared a state of emergency.

Sixty-one centimeters of snow accumulated in the Boston area and 30 centimeters in some parts of New York City on January 29. Wind gusts in coastal areas reached 96 to 120 kilometers per hour, equivalent to the power of a hurricane.

This is the first time since 2018 that a blizzard warning has been issued for the northeastern U.S. All flights in and out of New York, Boston, Philadelphia, and other major cities were canceled. Amtrak also canceled the high-speed trains between Boston and Washington.

Rhode Island’s governor said that the 24-hour snowfall during the storm will be one of the largest on record for the state.

More than 60 centimeters of snow fell in parts of Long Island, New York, killing at least four people, including three men who died while out shoveling snow. The town of Islip, the hardest-hit area in the state, received 24.7 inches (about 62.74 centimeters) of snow.

Winds in parts of Massachusetts exceeded 110 kilometers per hour. Snowfall exceeded 90 centimeters. More than 100,000 homes were without power. In addition, New Jersey, Connecticut, Pennsylvania, and other states also experienced strong storms and snow that day, and the snow in many areas exceeded 30 centimeters.

The French government recently reported that since the outbreak of avian influenza in September 2021, it has continued to spread. Avian influenza has occurred in 280 poultry farms across the country, and more than 2.5 million poultry have been culled.

Since the beginning of November 2021, many poultry farms in France have been quarantined to prevent the spread of the epidemic.

The government asked that in the week beginning January 20, in about 226 cities in the Landes, Gers, and Pyrénées-Atlantiques in southwestern France, all ducks, chickens, and turkeys must be culled, totaling as many as 1.3 million birds.

“78 and Almost Blind, Woman Monitored Around the Clock While Serving Time for Her Faith”

“Podcast (Cultivation): “A List of 71 People Who Quit the CCP Organizations””