(Minghui.org) No other country's consulate has people protesting in front of it all year round. There is also no other group of people like Falun Dafa practitioners who peacefully and persistently raise awareness. Practitioners can be seen protesting in front of Chinese consulates all over the world since the CCP (Chinese Communist Party) began persecuting Falun Dafa on July 20, 1999.

Before the Chinese New Year, Falun Dafa practitioners from Nagoya and Sapporo gathered in front of the Chinese consulate on January 31, 2022, and peacefully called for an end to the CCP’s 23-year-long persecution.

Practitioner from Nagoya: This Persecution Needs to End Immediately 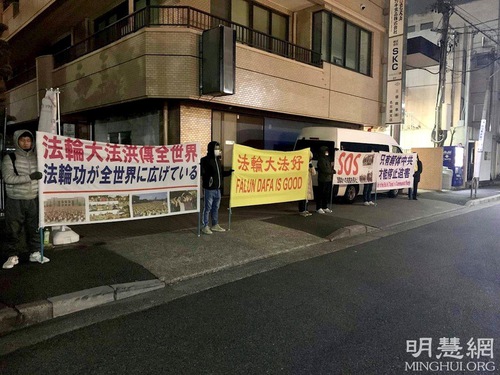 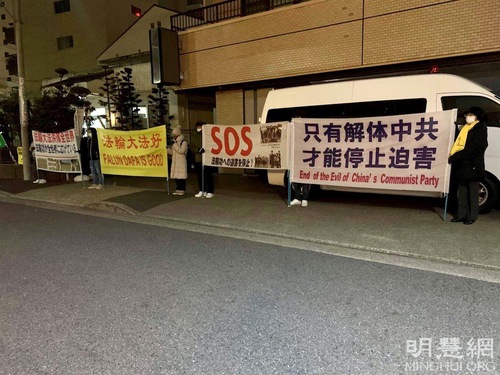 Practitioners from Nagoya peacefully protested in front of the Chinese consulate and called for an end to the ongoing 23 years of Falun Dafa’s persecution.

Several Vietnamese practitioners shared how they traveled for an hour on their bicycles to participate in this peaceful protest.

Phan Thiện said, “Falun Dafa practitioners in China are still being brutally persecuted by the Chinese communist regime. So, no matter how cold or harsh the weather gets, I feel I need to come here and raise awareness. I want to expose the CCP’s crimes to the world and I hope that this persecution ends immediately. I also hope that everyone is able to freely practice Falun Dafa.

Nguyễn Văn Quynh said, “I became healthier after I began practicing Falun Dafa. My xinxing also improved. I can relate to those practitioners being persecuted in China. This is the reason why I am here to participate in the protest.”

Gian stated, “I am here to peacefully protest the ongoing 23 years of Falun Dafa’s persecution. I hope that in this Year of the Tiger, the persecution will end and the people in China can also freely practice Falun Dafa, the universe’s Fa.”

Practitioner from Sapporo: We Will Persist as Long as the Persecution Still Exists

Every day, Falun Dafa practitioners hang up banners with the message, “Stop the Persecution of Falun Dafa” at the Chinese consulate in Sapporo. 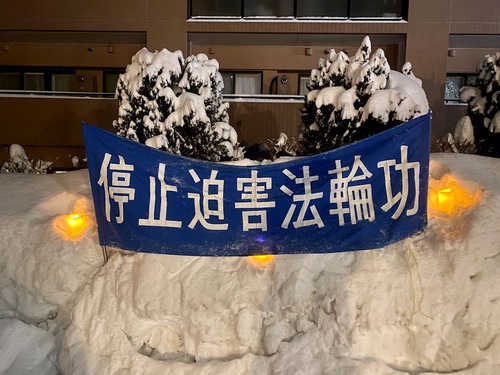 Despite the cold weather, practitioners continue to peacefully protest at the Chinese consulate in Sapporo.

With the freezing winter night of -10°C (about 14°F) and a meter and half of snow piled up, practitioners still gathered in front of the Chinese consulate. They attracted the attention of pedestrians and some drivers who slowed down to read the words on the banners.

A local practitioner stated that regardless of rain or shine, practitioners will continue to go to the Chinese consulates on important dates like New Year, Chinese New Year, April 25th and July 20th.

Ms. Ma said, “Falun Dafa practitioners around the world are one entity. We’ve heard that practitioners in the United Kingdom also protest in front of the Chinese Consulate around the clock, rain or shine. We all put ourselves in the shoes of those practitioners being persecuted in China. As long as the persecution is still ongoing, we will continue to come to the Chinese consulate and peacefully protest.”

“The environment around us has also changed for the better since we first started the peaceful protest in 2007. The policemen are very compassionate and we’ve also encountered many Japanese businessmen and politicians. My friends are also supportive of what I do each year. They send me Chinese New Year greetings and at the end of each message they would remind me to “keep warm when you head out and stay safe.” A friend also said that he admired my spirit of going to the Chinese consulate every year to peacefully protest.

The practitioners who protest in front of the consulate in Sapporo share the same feeling: The persecution will no longer continue when people fully awaken. When the puzzle pieces are finally put together, dawn will overtake the darkness.

Background: What is Falun Dafa and Why Does the CCP Persecute It?

“Symptoms of the Virus Expose My Deeply Hidden Attachments”