(Minghui.org) Today’s news from China includes incidents of persecution that took place in 11 cities or counties in 7 provinces, where at least 14 practitioners were recently persecuted for their belief. 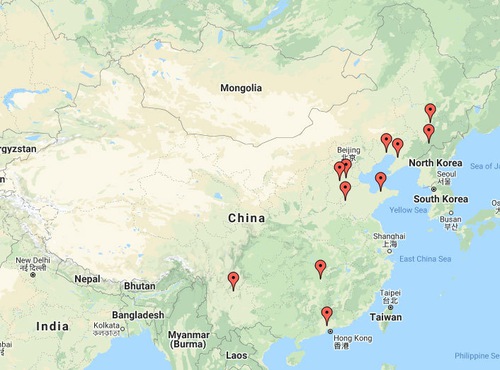 Ms. Wang Fenghua was arrested on May 24, 2020, for telling people how to keep safe during the pandemic. She was sentenced to three and a half years in prison on November 16, 2020. She was hospitalized for more than three months due to her health issue. Ms. Wang was recently transferred back to the Shijiazhuang Women’s Prison.

Mr. Li Kai, from Jinzhou City, was taken to the Jinzhou Prison from the Panjin Prison.

Officers from the Wangchengpo Police Station, Yuelu District, arrested Ms. Zhou Feiyan from her home on February 15, 2022, and confiscated her personal belongings. Further information is pending.

Dong Hao and other officers from the Wangou Town Police Station broke into Mr. Li Chunguang’s home on January 28, 2022. They ransacked the place and confiscated a photo of Falun Gong’s founder, his Falun Gong books, and other personal belongings. Mr. Li was taken to the police station and interrogated. He returned home the same day.

Mr. Liu Qingyu was arrested on April 12, 2021, after being reported the day before when he distributed information about Falun Gong. He was sentenced to 4.5 years in prison in November 2021. Mr. Liu pleaded not guilty, and his family members filed appeal documents to the Yingkou Intermediate Court on February 8, 2022.

Mr. Tang was recently arrested again by officers from the Dalubian Police Station. The police photographed him and took his fingerprints. Mr. Tang was detained there for one night.

Officers from the Anguo County Domestic Security Division and the Xifoluo Township Police Station, led by the secretary of Zhangjiaying Village, went to Ms. Wang Aizhen’s home on February 14, 2022. They ransacked her home and confiscated her Falun Gong books, photos of Falun Gong’s founder, and some informational materials. Since Ms. Wang was not at home, the officers took her husband to the Anguo City Domestic Security Division and forced him to press his fingerprints. They went to Boye County the next day and harassed Ms. Wang’s mother. They returned to her mother’s home on February 16 and 17 and searched each room.

The police also ransacked Ms. Li Juan’s home. They beat her husband, took him to the local police station, and interrogated him there.

Officers from the Dongchangfu District Political and Legal Committee repeatedly called and harassed Ms. Wang’s son, who lives in Beiyuan Community. They threatened to get him fired if his mother did not sign guarantee statements renouncing Falun Gong.

Ms. Xiong Guangrong, 74, was forced to leave home in November 2021 to avoid being persecuted for her faith in Falun Gong. She was tracked down and intimidated by the police. After being threatened by the police when she recently returned home, she suffered a mental collapse. Nevertheless, she was still sentenced to three years in prison, but she can serve the term at home. The police continued to harass her at home every month.

The case against another practitioner, Ms. Gao Longying, was turned over to the Miyi County Procuratorate in February 2022. Ms. Gao was ordered to go to the procuratorate and sign paperwork. She refused, but her daughter was forced to sign it on her behalf.

Officers from the Quanshan Police Station arrested Mr. Peng Lekuan, about 70 years old, from his home on February 15, 2022. His current whereabouts are unknown.

The police also prohibited Mr. Peng’s wife from leaving home. They pressured her to tell other practitioners’ names and contacts, who provided the Falun Gong informational materials, and who had a Fa study group in their home.

Ms. Zhang Yali, from the Tianxin District, was arrested on February 15, 2022, from her home. Further information is pending.

“Podcast (Cultivation): “85-year-old Woman Learns to Set Up Secure Computer System on Her Own””