(Minghui.org) Today's news from China includes incidents of persecution that took place in 12 cities or counties in 9 provinces, where at least 22 practitioners were recently persecuted for their belief. 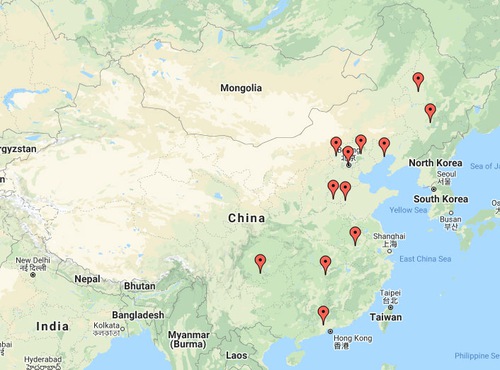 On December 29, 2021, the Luzhou City Intermediate Court issued a ruling to uphold the first-instance judgments.

In January 2022, several practitioners in Jilin City were harassed and arrested.

Mr. Ding Jian was arrested in mid-January 2022 and his home ransacked by officers from the Guchuan Police Station in the Longtan District.

Longtan District police officers went to Ms. Jin’s home around January 20, 2022. She was not there, but officers ransacked it and took a copy of Zhuan Falun. Exactly what else they took is not clear.

Ms. Zhang Hongli and another practitioner Liu (gender unknown) from Gaoqiao Town in the Nanpiao District were arrested while talking to people about Falun Gong at a farmers’ market on January 29, 2022. They were taken to a detention center.

Mr. Sun Baojun, in his 70s, was beaten at home by six or seven police officers, the township head, and others on June 23, 2020. They arrested Mr. Sun and confiscated photos of the founder of Falun Gong, Falun Gong books, a DVD player, DVDs, and a satellite receiver.

The officers took Mr. Sun to the Hanmaying Police Station and held him overnight. The following morning they took him the Longhua Lockup Center. A week later, Mr. Sun was transferred to the Longhua Detention Center. The officers confiscated his watch, clothes, phone book, and 120 yuan in cash.

In the detention center, Mr. Sun was abused by the head of the cell, Zhang Tianhao. After being held for about six months, Mr. Sun was sentenced to 18 months in prison. He appealed, but the original sentence was upheld.

On May 16, 2021, Mr. Sun was taken to Xiabancheng Prison, then later brought back to the Longhua Detention Center, where he was held until he was released on December 31.

Ms. Zhou Jing, 46, about 1.60 meters (5 feet 3 inches) tall, a college graduate, wears glasses, lives in the Dongcheng District. Her friends and family have not heard from her for two weeks.

Mr. Xu Xianbing clarified the truth about Falun Gong to tourists in the park on January 24, 2022. He was reported to the police, who arrested him. He was placed under administrative detention for 10 days and is being held in the Pingjiang County Detention Center.

Li Manying and Lang Dongyue (genders unknown) from Huailai County were arrested on December 14, 2021. They were held in the Zhangjiakou City Detention Center. Police officers took them for physical examinations on December 30. Li was subsequently held in the Dahuangzhuang Town Home of Care to be brainwashed. Lang was placed under criminal detention in the Zhangjiakou City Detention Center. Li returned home on January 29, 2022.

Ms. Pei Ling’s case has been turned over to the Shushan District Procuratorate.

Officers from the Jiangdian Town Police Station in Gaotang County, together with Yang Jifeng, a Chinese Communist Party official in Sanyang Village, Jiangdian Town, broke into Ms. Yang Junfang’s home and searched it on January 28, 2022.

A Liandong Police Station officer in the Congtai District called Ms. Zhang Xueying, who lives in Yongheli Community, and harassed her on the morning of January 25, 2022.

In April 2021, four people from the Yongheli Community Residential Committee in the Congtai District and the Liandong Police Station went to Ms. Zhang’s home and harassed her.

Mr. Li Yinhuan from the Yuexiu District was arrested at home on the morning of January 26, 2022.

Mr. Sun Wenzhong and three other practitioners were arrested by officers from the Lindian Police Department on the morning of January 8, 2022. Mr. Sun was held in the Taikang Detention Center. The other three were released on bail. Mr. Zhang Liguo’ case was turned over to the Development Zone Procuratorate. He was also fined 10,000 yuan.

“Growing Black Hair in My 70s after Practicing Falun Dafa”