(Minghui.org) Chinese New Year is one of the most celebrated holidays in China and throughout Asia. With Chinese New Year just around the corner, many Falun Dafa practitioners both inside and outside of China sent their greetings to the Dafa’s founder through Minghui.org. They expressed their sincere gratitude and wished Master Li Hongzhi, the founder of Falun Dafa, a Happy Chinese New Year. Among these greetings are those from young practitioners and teachers from the Minghui School in Vancouver. They reflected on the positive changes they experienced after they began practicing. 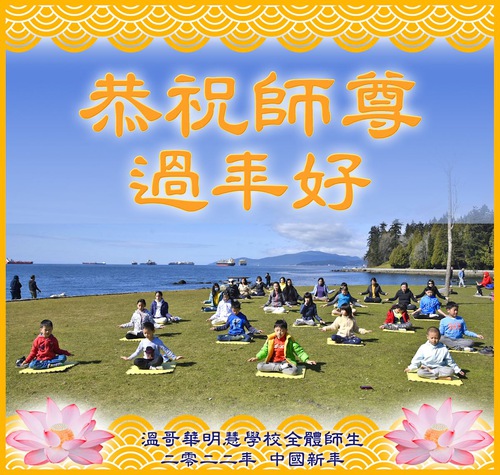 Minghui School Teacher: Cultivation Environment Is Well-Liked By Both Parents and Students

Ms. Tao Qiong a Minghui school teacher, said that Falun Dafa practitioners adhere to the principles of Truthfulness-Compassion-Forbearance. Students learn to look inward and find their own shortcomings whenever they encounter conflicts. In this way, conflicts are quickly resolved and don’t escalate. The cultivation environment at the Minghui School is well-liked by both parents and students.

She explained, “The Minghui School was established by Falun Dafa practitioners. It is an after-school and summer school program. Students study the Fa and practice the five Falun Dafa exercises at school. They also adhere to Falun Dafa’s principles of Truthfulness-Compassion-Forbearance in their daily lives.

Ms. Tao added, “Nowadays many children get into conflicts which often become physical. However, this rarely happens at Minghui School. Falun Dafa also helps students unlock their wisdom. Many of our students are excellent in both character and in their studies.”

The teachers and students at the Minghui School would like to wish Master Li Hongzhi a Happy Chinese New Year.

13 Year Old: Falun Dafa Gave Me Wisdom and Taught Me to be Tolerant

Rui Rui, 13 years old, is the second oldest child in his family. According to his mother Angela, “Rui Rui was the naughtiest of all three sons. It was very hard for us to discipline him. After he began attending the Minghui School two years ago, Rui Rui became obedient, well-behaved and smart. He began studying the Fa often and even took a liking to read books. 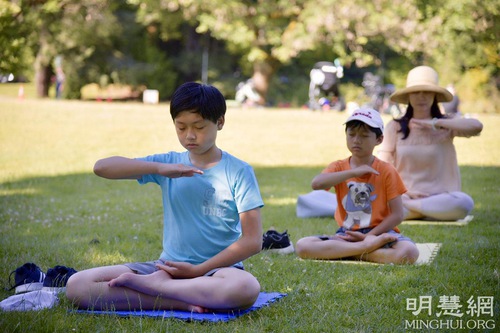 Rui Rui said, “By practicing Falun Dafa I calmed down and my thoughts became clear. My heart feels pure and I’m also more tolerant of others. If anyone treats me unfairly I’m able to remain calm and place others first.

One of his classmates at his elementary school was diagnosed with ADHD (Attention-Deficit/Hyperactivity Disorder). He bullied Rui Rui by pushing and kicking him. One day he shook Rui Rui’s desk so hard that his tablet fell to the floor and was dented. Another time he dumped out all the things in Rui Rui’s backpack. Many of his classmates witnessed what happened and were unable to put up with it. They told Rui Rui to tell the teachers. He said, “I won’t tell the teacher. If I tell her, he will be reprimanded.”

That classmate tripped and fell on the ground one day and was hurt badly. Rui Rui immediately took him to the nurse’s office to get his wounds bandaged.

Angela said, “Rui Rui would not have treated this classmate so kindly if he hadn’t practiced Falun Dafa. He learned to be tolerant of others. It was hard for him to practice his tolerance in the beginning and he would do it unwillingly, however, as time passed, he was able to take everything with a calm heart.”

Rui Rui feels Falun Dafa elevated his moral standards and unlocked his wisdom. He was awarded prizes for his English composition and even moved a parent to tears one time during a piano concert. He said, “I excelled in piano because I practice Falun Dafa, so the piano pieces that I perform are pure.”

Rui Rui said, “Thank you Master for bestowing me with a healthy body and guiding me to be a better person. I learned to be tolerant of others and not just think about myself.”

Rectifying Myself after Practicing Falun Dafa

An An is fourteen years old and felt that she was living a miserable life. She wanted to be a boy and thought about undergoing transgender surgery. She gave her parents a really hard time and easily lost her temper over trivial matters.

Her mother Ms. Li, said, “It was truly a challenge and hard time for us.”

An An changed after she began practicing Falun Dafa. She no long held grudges and was able to reason with her parents whenever they disagreed on something. She no longer wanted to undergo transgender surgery and realized that it wasn’t the right thing to do.

After she stopped thinking about the transgender surgery, she said many things became smooth, “I felt that my life has become easier.” 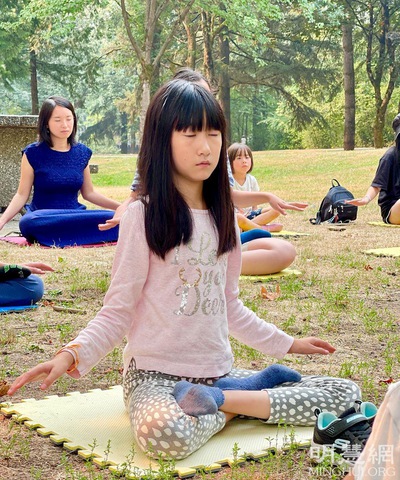 Emily is 11 years old and began practicing Falun Dafa with her mother at a very young age. Since the pandemic lockdown began two years ago, Emily was able to spend more time studying the Fa online with her classmates from the Minghui School. Emily said she benefited a lot and learned to distinguish what’s right and wrong in accordance to the principles of Truthfulness-Compassion-Forbearance.

She said, “I no longer listen to rap or rock music because it does not align with the principles of Truthfulness-Compassion-Forbearance. That music causes people to easily lose their tempers.”

Emily only reads books with hand-drawn pictures or with appropriate content. She feels Falun Dafa helped her become peaceful and calm. It is hard for many children to control their temper nowadays. Emily said that whenever people curse or yell at her, she just walks away and does not let it bother her.

Peng Peng is 13 years old and was born in China. His parents were illegally detained in China because they are Falun Dafa practitioners. As a result, he had to live with his grandparents who spoiled him. It was hard for his parents to discipline him when he returned to them. He was also addicted to computer games, which became so bad that he threw temper tantrums whenever his parents took the games away from him.

His parents found it hard to discipline him and decided to introduce him to Falun Dafa. Peng Peng’s temper calmed down after he began practicing.

He said, “My emotions experienced a dramatic change after I began practicing Falun Dafa. In the past, I yelled at and cursed people whenever they wronged me. Now I no longer treat people that way.

He also got rid of his attachments to playing computer games. He said, “Reading Zhuan Falun helped me with my addiction to computer games. I stopped gaming as soon as I thought about the Fa principles mentioned in Zhuan Falun. I also memorized Zhuan Falun and stopped wanting to do bad things.

Besides having his character uplifted, Peng Peng’s health also improved. He said, “I’m now healthier. My body would itch all over and hurt in the past. After I began practicing Falun Dafa, I feel comfortable and energetic.”

He said, “Master, thank you for watching over me when I was not diligent in cultivation.”