(Minghui.org) Today's news from China includes incidents of persecution that took place in 14 cities or counties in 9 provinces, where at least 15 practitioners were recently persecuted for their belief. 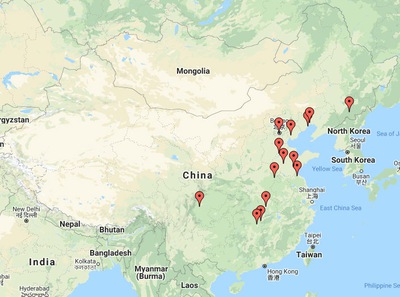 Officers from the Shenyang City Domestic Security Division, the Huludao City Police Department, the Shaheying Township Police Station, and the Huangtukan Village Party secretary went to Mr. Gong Yubo’s home and arrested him at 10 a.m. on January 21, 2022. They ransacked Mr. Gong’s home and confiscated a computer and a printer. Four or five unmarked cars were parked outside, and their license plates were covered.

The police took Mr. Gong’s phone. After he was taken away, the officers contacted his family using his phone. It was reported that Mr. Gong was taken to Shenyang.

Ms. Xu Ying was arrested in the booth that she leased in a department store and was taken to the Dongfeng Police Station in Quanyang Town around 1:30 p.m. on January 24, 2022. Further details are not available.

Mr. Xu Xianbing, in his 40s, from Yuping Town, works in the Martyrs Cemetery of Pingjiang County Development Zone. He was reported to the police for talking to people about Falun Gong on the afternoon of January 24, 2022. He was subsequently arrested. His current whereabouts are unknown.

Mr. Wang Zhongguo was reported to the police for talking to people about Falun Gong in Shitoujing Village, Jianye Township, on January 1, 2022. He was arrested and his home was ransacked by officers from the Jianye Township Police Station. He is being held in a detention center. The detention center did not allow his family members to visit him.

Ms. Zhang Liping, 66, a retired employee of the Tai’an Liquor Factory, was detained many times, twice taken to labor camps, and sentenced to prison once because she persisted in practicing Falun Gong and clarifying the truth to people.

Ms. Zhang was arrested on January 13, 2022. She was later released and returned home. Around 9 a.m. on January 17, Tian Lin, a team leader of the 610 Office of the Taishan District Police Department, took a group of officers and community personnel to her home. They knocked on her door. When no one opened it, they called in a locksmith, who looked at the lock and said that the lock had been pried. One of the officers said, “I did it.” The locksmith picked the lock and opened the door. These people went in, but no one was at home. The two people who were assigned by the community management office to monitor Ms. Zhang said, “We saw her entering the house. Why is no one here?” They went downstairs to continue monitoring and did not leave until after 5 p.m.

To avoid persecution, Ms. Zhang had to leave home and is now displaced.

At noon on January 24, 2022, officers from the Wali Police Station in the Kaiping District went to Ms. Li Qiuxiang’s home to videotape her. They claimed that she was the one who posted information about the persecution at the farmers market. Details on Ms. Li’s situation are not yet available.

The Dongcheng District Court in Beijing prevented Mr. Li Zongze’s father from defending him as family and friends. Mr. Li’s father, Mr. Li Zhiqiang, worked on filing appeals in which he accused prosecutors and judges of violating the law for personal gains, abusing power, and depriving him of the right to defend his son as a family member.

On January 20, Mr. Li Zhiqiang mailed the appeal to the Dongcheng District Court via EMS, and the guard at the gatehouse took it.

When Mr. Li Zhiqiang got off work at noon on January 24, he noticed that he was being followed to the door of his home. That afternoon, community management staff members in the sub-district called and said that higher authorities issued a list of those who filed appeals and petitions, and Mr. Li Zhiqiang’s name was on the list. The community management staff members worried that he would go out to petition. Mr. Li Zhiqiang said, “I was trying to defend my son as allowed by law. My son was locked up for simply taking a few pictures of the street scenes during the epidemic. This is most unfair to him.”

Mr. Sun Yushan was arrested by officers from the Qingshuitang Police Station in the Kaifu District on the evening of January 20, 2022. He is being held in the Changsha City No. 2 Detention Center.

At that time, Mr. Sun’s family could not get in touch with him, and they filed a case with the police that Mr. Sun was missing. They learned from the police that he was arrested. They also learned that his home was ransacked.

Ms. Hu Fanxia from Gaozhuang Town was arrested by officers from the Dongli Town Police Station in Yiyuan County, Zibo City, on January 21, 2022.

Ms. Zhou Xiuhua was tried via video link by the Hanyang District Court on December 22, 2021. The trial lasted for over 20 minutes. No verdict was announced in the courtroom. The judge said that it would take a month before they reached a decision.

Deputy director Liao Hai of the Zhihe Police Station in Pengzhou City, two domestic security officers, and another person went to Mr. Xiong Huiyi’s home in the Wanjia Community after 2 p.m. on January 19, 2022. They showed a search warrant and ransacked the place. They asked Mr. Xiong if he went out to talk to people about Falun Gong or distributed Falun Gong materials. They left around 4 p.m.

It was past 6 p.m. on November 27, 2021, when Ms. Li Ping opened her door to the hallway, a group of people rushed in after her. She later learned that these six people were domestic security officers.

One person videotaped Ms. Li, and the others searched every room in her home. They rummaged through cabinets and drawers, leaving her home in shambles. Ms. Li tried to prevent them from taking her Falun Gong books and photos of the founder of Falun Gong. Two people grabbed and restrained her, while others took the books and photos.

They also took a bag that contained more than twelve weekly publications and QR code cards, more than 400 yuan in paper bills with Falun Gong facts printed on them, a laptop, an electric bicycle, a cell phone, and keys on a key ring.

At 10 a.m. the next morning, officer Wan Dong called and asked Ms. Li’s son to accompany her to the police station. After Ms. Li and her son went there, they wanted to collect her blood samples, but she refused to cooperate. One hour later, they asked her son to give his blood samples instead. Officer Wan asked Ms. Li to sign and fingerprint paperwork, which she refused.

On December 1, the director of the 610 Office called in a former Falun Gong practitioner who was now helping the CCP, as well as Ms. Li’s granddaughter, son, and daughter. The 610 Office director coerced them to persuade Ms. Li to give up practicing Falun Gong.