(Minghui.org) Japan was hit by a strong cold snap in early February 2022, with record-breaking snowfall. It caused trains to stop running, significantly impacting commutes. A severe tropical cyclone struck southeastern Madagascar on February 5, killing at least 10 people and displacing as many as 150,000 people. Ecuador's capital Quito suffered its the worst flooding in two decades on February 7, with 28 dead and 52 injured.

Trains Stop Running Due to Record-breaking Snowfall in Japan

Japan was hit by a strong cold current since February 5, 2022, with heavy snow in the Hokuriku region. Sapporo, the largest city in Hokkaido, experienced record-breaking snowfall, which caused all outbound trains to stop running. Long-distance buses and private vehicles were jammed on urban roads. Some 70 passengers were trapped at New Chitose Airport overnight on February 6. 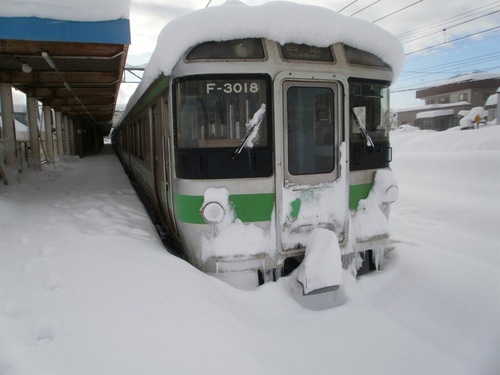 The snowfall in Sapporo City reached 60 centimeters in 24 hours as of 2:00 p.m. on February 6, a record high in local history. The deepest snow accumulation reached a depth of 133 centimeters at 1:00 p.m. on the same day. The last time when Sapporo City had more than one meter of snow was eight years ago.

Two people were killed during snow removal in Akita and Toyama prefectures.

Due to the heavy snow covering the railway tracks, and the pace of snow removal not keeping up, in the morning of February 6, there was a rare situation that no train could leave or arrive at Sapporo Station, with as many as 704 trains affected. The main train lines were still suspended as of February 8, and the number of suspended trains on that day remained as high as 339.

Trains including the Hakodate Line and Chitose Line from Otaru to Sapporo and Tomakomai, as well as the Airport Express to New Chitose Airport, were suspended, making it hard for local commuters to work and school as well as to and from the airport.

In addition, Japan’s Weathernews reported that from February 9 to February 10, the low pressure on the south coast of Japan’s southern sea may bring heavy snow to the Kanto region, and even the center of Tokyo may have 10 centimeters of snow.

A severe tropical cyclone struck southeastern Madagascar, an island in the Indian Ocean, on February 5, killing at least 10 people and displacing as many as 150,000 people.

It was the second storm in two weeks to hit Madagascar, with a population of 30 million, according to Reuters. Cyclone Batsirai brought heavy rain with strong winds of 165 km/h in the evening of February 5, causing flooding in eastern Madagascar. The flood caused buildings to collapse and power to go out. Some southeastern areas have been isolated from the surrounding areas due to the flood.

The country’s officials stated that the worst-hit town was Nosy Varika on the east coast, where almost 95% of the buildings were destroyed. Traffic to the surrounding areas was also cut off.

The storm’s damage added to the damage caused by Cyclone Ana two weeks ago, when 55 people were killed and 130,000 displaced.

Ecuadorian Capital Hit by the Worst Flooding in Two Decades, with 28 Dead and 52 Injured

The mayor of Quito, the capital of Ecuador, stated that the area was hit on February 7 by the worst flooding in two decades. At the time of writing, 28 people had been killed and 52 injured in Quito.

Agence France-Presse reported that floodwaters inundated houses, swept away vehicles and even volleyball players and spectators from a sports field.

The mayor of Quito, Santiago Guarderas stated that the rainfall on February 6 was more than 20 times that of the previous day, a new record since 2003.

Most of Ecuador has been hit by torrential rain since October 2021. At least 44 died.

“Destitute Woman Dies of Cancer While Imprisoned for Her Faith”

“My Thoughts After Reading Master’s New Article “Wake Up””