(Minghui.org) The Philadelphia Inquirer, the largest newspaper in Pennsylvania, published a short piece titled, “Legacy of Jiang Zemin” in its Letters to the Editor section on December 14, 2022. Originally from China, Mr. Kui Huang now works as an engineer in Philadelphia. He stated at the end of his letter, “Jiang’s death brings some hope for the people in China to follow their conscience and stop participating in this vicious annihilation campaign.”

When Mr. Huang was a doctoral student at Tsinghua University (known as China’s MIT), he was jailed and tortured for five years for practicing Falun Gong and abiding by its principles of Truthfulness-Compassion-Forbearance. 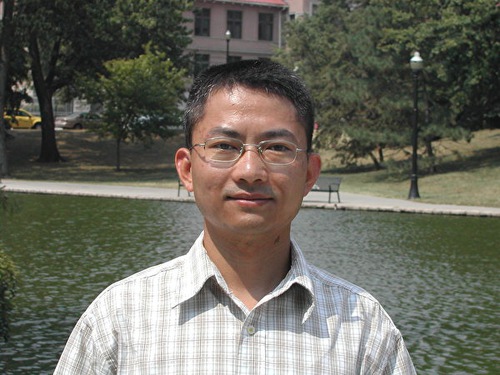 Mr. Huang said that the horrific legacy of Jiang, former leader of the Chinese Communist Party (CCP), was launching the persecution of Falun Gong in July 1999.

One of the thousands of persecuted practitioners in China, Mr. Huang, who was still a doctoral student at Tsinghua University, was arrested in December 2000 and incarcerated for the next five years for not giving up practicing Falun Gong. He was made to do forced labor for 16 hours every day and was tortured with a high-voltage electric baton. He was deprived of sleep for 30 consecutive days and was forced to squat for three full days.

Peace Before the Persecution

Mr. Huang was born in a worker’s family in Xinyang City, Henan Province. He studied hard and achieved excellent grades in school. In 1994, he was admitted to Tsinghua University, one of the best higher education institutions in China, with honors. He was elected class head and vice chairman of the Science and Technology Association of the Department of Precision Instruments by merit of his top academic performance in the class.

While attending college, Mr. Huang was full of curiosity and thought about the supernormal functions of the human body, the universe, the ultimate meaning of life, and supernatural phenomena. One day in early 1998, a classmate gave him a copy of Zhuan Falun (Volume 2). Intrigued, he started practicing Falun Gong. Twenty-five years later, Mr. Huang’s memory is still fresh when he recalls those years. He said, “Falun Gong books teach very profound principles, and they clearly explain the mysteries of the human world and the long history of the universe.”

He was in his early 20s and realized that Falun Gong was what he had been looking for. He repeatedly read Mr. Li Hongzhi’s works in his spare time, and regularly participated in morning group exercises.

Falun Gong was spreading rapidly across China, and there were 12 Falun Gong practice sites at Tsinghua University alone. Hundreds of people did the exercises at each practice site, which Mr. Huang said was spectacular to see. When there were too many people at one practice site, extra shifts were arranged, until there were four shifts each day: Morning, early afternoon, late afternoon, and evening. 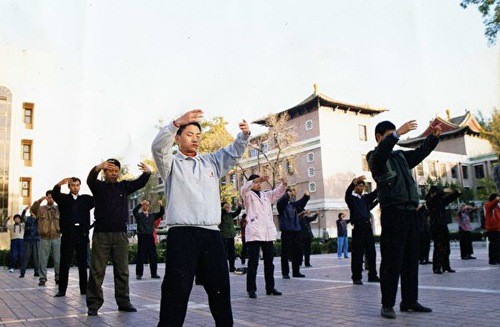 After practicing, many students no longer slept late or played games. Their health and morality improved, and more students took up the practice. The students practiced and interacted freely, and Mr. Huang said it was the happiest time.

He said following Falun Gong’s principles, Truthfulness-Compassion-Forbearance, improved both his physical and mental health and opened his wisdom. Before graduating from his undergraduate studies, he was recommended to directly study for a Ph.D. and was accepted at Tsinghua University in September 1999. 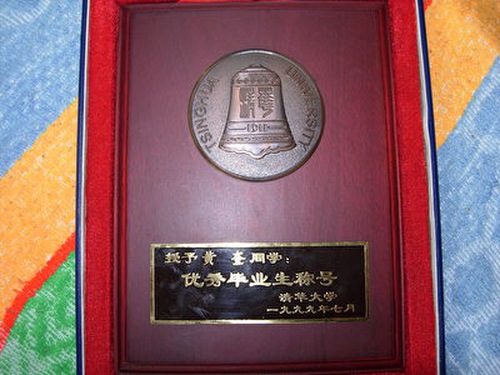 On July 20, 1999, Mr. Huang was shocked when he learned from the Minghui.org website that volunteer coordinator practitioners across the country were arrested. The next day, when he and other Tsinghua students went to appeal at the Appeals Office near Xidan, they saw armed police beating Falun Gong practitioners in the street and forcibly pulling practitioners into a bus. Buses took a large number of practitioners to the Shijingshan Gymnasium and the Fengtai Gymnasium in the suburbs of Beijing. He witnessed some practitioners being repeatedly beaten and drenched with water. One Tsinghua student was beaten until his T-shirt was torn into strips.

He recalled that the temperature in Beijing rose suddenly at that time, and the ground temperature was as high as 50 degrees Celsius. Huang went to the State Council Appeal Office many times to appeal. He went to Tiananmen Square to unfurl a banner, and was interviewed by Western media reporters. As a result, he was arrested, beaten, and suspended from school.

At 3:00 p.m. on July 22, 1999, the administrators of Tsinghua University asked everyone to watch TV, which broadcast the decision of the CCP Politburo Standing Committee for the first time. That day, the CCP’s public suppression of Falun Gong officially began.

All radio stations, TV stations, and newspapers in China suddenly went full steam ahead to slander Falun Gong. Jiang Zemin issued a policy of extermination against Falun Gong, “defaming their reputation, crushing them financially, and destroying them physically.” The 610 Office was set up, and from top to bottom at all levels of government it has been persecuting Falun Gong for 23 years.

Under Jiang's instruction, the army and the armed police hospitals cooperated to harvest organs from a large number of living Falun Gong practitioners and formed a one-stop shop to carry out a crime that has never been seen.

Faced with the escalating persecution and the silence of the international community, Mr. Huang said that the CCP’s suppression of people who practice Truthfulness-Compassion-Forbearance destroyed the last bit of kindness that people still had. It portended disaster for the whole nation.

On December 16, 2000, Mr. Huang was arrested in Zhuhai City, Guangdong Province. He was then detained in the Zhuhai No. 2 Detention Center, where he was squeezed into a small cell with 20 detainees. In the cell, there is no sunlight or fresh air. Eating, drinking, sleeping, and producing forced labor products were all done in that cell.

He said that he was forced to work seven days a week, at least 16 hours a day, and often 18 to 20 hours, because the workload was heavy. He was not allowed to sleep if he didn’t finish his quota.

The forced labor products included various plastic flowers, Christmas tree lights, necklaces, moon cake boxes, table lamps, and Spiderman toys. This included processing food. Everyone was given pliers to clamp the hard shell of pistachios and pull them half open.

Mr. Huang was sentenced to five years in prison in October 2001. He was interrogated, threatened, and beaten. Any resistance would be met with brutal reprisals. He went on hunger strikes twice, and the prison guards used metal pliers to pry open his mouth and forcibly poured in an unknown liquid.

After the second hunger strike, Mr. Huang was handcuffed and forced to kneel in front of hundreds of inmates. More than twelve prison guards shocked him with high-voltage electric batons. Electricity passed through his body, causing him to violently convulse.

He was imprisoned for a total of five years, including nearly a year in solitary confinement. At one point, he was deprived of sleep for an entire month.

Jiang’s Crimes Are Heinous and Need to Be Thoroughly Investigated

In July 2015, 34 Tsinghua faculty members and students at home and abroad collectively sued Jiang Zemin for torture and crimes against humanity and demanded compensation. Mr. Huang, who was already in the United States, also participated in this lawsuit as a victim. An Australian lawyer prepared the case file for the lawsuit and sent it to China’s Supreme Court, the Supreme Procuratorate and the Ministry of Public Security in Beijing.

Mr. Huang said that Jiang’s persecution of Falun Gong is a large-scale persecution targeting around 100 million practitioners, which also implicates their family members and friends. Various aspects of the government, such as the police, procuratorate, court, media, schools, and education system have all been involved. The scope of the persecution is unimaginable.

“Jiang was a heinous person. It is a pity that he was not brought to justice before he died,” Mr. Huang said. “But the aftermath must be made public. The scourge of the Chinese people must be completely investigated. Justice will prevail in the world eventually. His corrupt family will not escape justice.”