(Minghui.org) On December 9, the day before the United Nation’s Human Rights Day, the U.S. Department of State (DOS) announced sanctions against 65 individuals and entities in 17 countries for engaging in corruption and human rights abuses.

Among the sanctioned were three Chinese Communist Party (CCP) officials and two Chinese businessmen, including:

Tang Yong (former deputy director of the Chongqing Area Prisons): “Pursuant to Section 7031(c), the Department of State is designating Tang for his involvement in gross violations of human rights, namely arbitrary detention of Falun Gong practitioners, which also amount to particularly severe violations of religious freedom,” announced the Department of State on its website.

Li Zhenyu and Zhuo Xinrong: both are businessmen overseeing Dalian Ocean Fishing Co. and Pingtan Marine Enterprise, Ltd. They were accused of engaging in forced labor.

According to U.S. Secretary of State Antony Blinken, the U.S. State Department is taking various actions to “promote accountability for corruption and human rights abuse around the world.” Specific actions include Global Magnitsky sanctions and visa restrictions pursuant to the Department of State’s Section 7031(c). 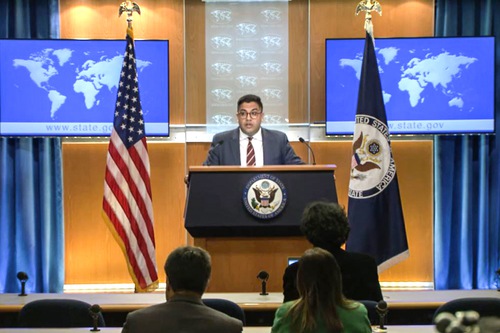 Vedant Patel, Principal Deputy Spokesperson for the DOS, explained at a December 9 press conference that officials of foreign governments would be designated for sanctions once credible information was obtained of their involvement in significant corruption or gross violations of human rights. “Those individuals and their immediate family members are generally ineligible for entry into the United States,” he stated.

The U.S. government has issued several sanctions against Chinese human rights violators in recent years. In May 2021, the DOS announced sanctions against Yu Hui, former director of the Central Leading Group on Preventing and Dealing with Heretical Religions in Chengdu City, Sichuan Province, for “gross violations of human rights, namely the arbitrary detention of Falun Gong practitioners for their spiritual beliefs.”

During Yu’s tenure as the director of the 610 Office between August 2016 and July 2017, 479 Falun Gong practitioners were harassed and had their homes ransacked, 117 were arrested, 27 were sentenced, and three died due to torture in police custody.

On Human Rights Day in 2020, the DOS designated 17 foreign officials and their immediate family members as human rights violators, including Huang Yuanxiong from the Wucun Police Station of the Xiamen Public Security Bureau, Fujian Province.

“The world cannot stand idly by as the PRC government perpetrates horrific and systematic abuses against people in China, including violating the internationally recognized right to freedom of thought, conscience, and religion or belief,” emphasized the DOS press release.

“Stockholm, Sweden: Public Support for Practitioners’ Efforts to End the Persecution in China”