(Minghui.org) Today's news from China includes incidents of persecution that took place in 9 cities or counties in 6 provinces, where at least 31 practitioners were recently persecuted for their belief. 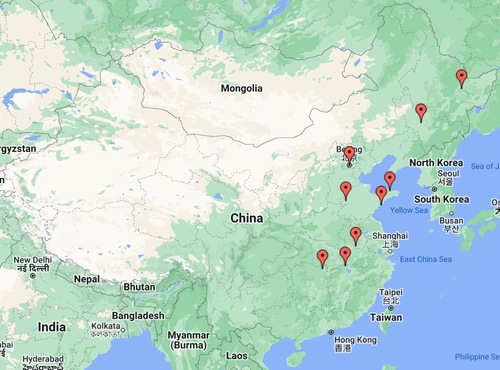 Ms. Xu Delan was arrested at home. The police confiscated many Falun Gong books. Ms. Xu is detained in a mental hospital.

Mr. Li Deqing was arrested at his workplace. His home was ransacked. His son was also arrested.

Ms. Pan Baozhen was arrested by officers from the Xinqu Police Station. The police ransacked her home and confiscated numerous Falun Gong books, a media player, and four laptops. Ms. Pan was detained in the police station for three days and two nights before she was transferred to the Boping Detention Center and then the Liaocheng City Detention Center. Because of the pandemic, she was later placed under residential surveillance. Ms. Pan’s mother and other family members were also arrested. Several Falun Gong books were confiscated. Her mother was placed under 10-day criminal detention, which was not executed because of her advanced age.

Ms. Zhou Jiuju was arrested. Her home was ransacked. The police confiscated her Falun Gong books, a photo of Falun Gong’s founder, a media player and 300 yuan in cash.

An elderly practitioner was arrested. Because of his age, the police took away his wife Ms. Xu Meihong instead of him.

Ms. Zhang managed to escape being arrested. But the police phoned her son and told him to open the door and they ransacked her home. They confiscated numerous Falun Gong books, three media players, and a photo of Falun Gong’s founder.

Li Weixian, Zeng Xianping and Chunhong were arrested. Their homes were ransacked. They were later released on bail pending trial.

Zhao Jichang and Li Hongling were also arrested. Their homes were ransacked.

Ms. Jin Xiuyun was arrested. The police ransacked her home and confiscated several Falun Gong books and a media player.

The owner of a print shop, a landlord and several other related people were also arrested.

Mr. Liu Yaping lives in Zhushui Village, Pinggu District. He was arrested by officers from the South Dulehe Police Station in Pinggu District on October 6, 2022 and was taken to the Pinggu District Detention Center. His home was ransacked.

When Mr. Liu asked to write a complaint letter against the police station while he was held in the detention center on October 7, 2022, his request was denied. He was subjected to a torture called the “dog chain” by guard Liu Hai. He was handcuffed and shackled. The restraints were fastened together with a short chain.

Mr. Liu was interrogated by Meng Bin in the Pinggu District Procuratorate on November 8, 2022. The release notice from the procuratorate was issued two days later. Mr. Liu was released on bail pending trial in the South Dulehe Police Station. The items that the police confiscated from his home were not returned.

Mr. Liu Junhua, Li Shuiqiao (gender unknown) and Ms. Wu Huanhuan were arrested by officers including Yu Liang in Lianxi District three months ago. They have been detained since then.

Ms. Sun Yuhua was harassed at home on the afternoon of November 4, 2022. Four people including the director of local neighborhood committee and a police officer came and talked to her for three hours. She was asked to sign a document, which she refused.

Three plainclothes officers from the Liangxinbao Police Station in Junshan District went to Ms. Meng Qunman’s home on the morning of September 13, 2022. They claimed that she was caught on surveillance camera when she distributed truth-clarifying materials the day before. They waved a cell phone in front of her briefly to show the video clip. They searched her room and destroyed the book Zhuan Falun. They asked where Ms. Meng got the materials and attempted to arrest her. Ms. Meng’s husband managed to take her away on his motorcycle. After Ms. Meng left home, the police continued to harass her family.

Mr. Li Shaozhi was sentenced to five years in prison. He was released from Changchun Prison on August 21, 2022 and returned to Jiamusi City.

No one has seen or heard from Wang Lijun (gender unknown) since mid-September 2022.

Several people led by Han Weidong, head of the Chengyang District 610 Office, arrested Mr. Wang Guohui and Ms. Yu Chunlin. They confiscated all their Falun Gong books, three laptops, two printers, some copies of the Minghui Weekly and two cell phones. Both practitioners have been detained in the Jihongtan Police Station for 18 days. A person cannot be held in a police station for more than 24 hours.

Ms. Guo Meng, daughter of Ms. Shi Cuiying, has been held in the Changping District Detention Center for more than two years. She has had two court hearings.

Ms. Li Yuelan was arrested and detained for more than a month because she posted a sticker with information about Falun Gong when she was in Beijing in August 2020.

Ms. Li was arrested by officers from the Wuhu Road Police Station in Baohe District for posting a sticker in July 2021. She was sentenced to six months in prison and was released in January 2022.

Ms. Li was arrested again by officers from the Wuhu Road Police Station around October 10, 2022.

Xiao Fengyi (gender unknown) and another practitioner were arrested at Xiao’s home by twelve officers from the Chengguan Police Station in Fangshan District around 7-8 p.m. on October 17, 2022. The police ransacked the home and confiscated their Falun Gong books, computer, printer, and other items.

“Brussels, Belgium: Protest of the 23-year-long Persecution of Falun Gong at the Chinese Consulate”

“Ireland: Chinese Thank Practitioners for Exposing the Persecution “You Speak Out for Chinese People””