(Minghui.org) More than 6000 practitioners participated in the 2022 Taiwan Falun Dafa Experience Sharing Conference at Heping Basketball Gymnasium in Taipei on November 13. Three practitioners who have cultivated for more than two decades shared their thoughts after listening to other practitioners’ experiences.

Former Attorney General for the Ministry of National Defense: Rediscovering the Original Intent of Cultivation

Li Cheng-hsiung started practicing Falun Dafa in 2001 and has attended Fa conference every year since then. This year, the story of a student practitioner from Niao Song High School of the Arts resonated with him because he had a similar experience, where he once had lost his enthusiasm for cultivation, but by virtue of his firm belief, he broke through and realized the joy of elevating in level. 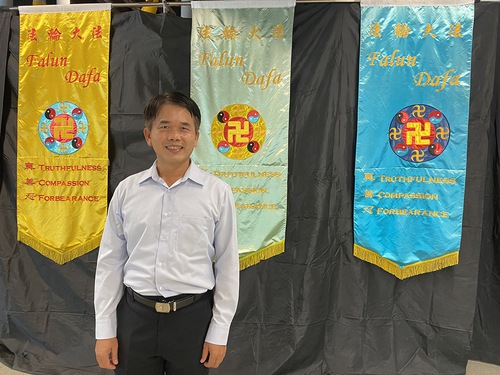 Li Cheng-hsiung, former attorney general for the Ministry of National Defense has experienced the joy of elevating in level in cultivation

Li Cheng-hsiung, former attorney general for the Ministry of National Defense, had an accident on a paraglider when he was 24 years old. Surgery repaired his broken leg, but he continued to feel pain and had issues with his stomach and liver. He tried a few dozen doctors of both Chinese and western medicine over 10 years but saw little improvement. In the end, a Chinese medical doctor suggested he read Zhuan Falun. Li Cheng-hsiung thus started to practice Falun Gong, also known as Falun Dafa, and regained his health.

In the early stages of cultivation, Li Cheng-hsiung studied the Fa and did the exercises earnestly, which benefited him both physically and mentally. Two years later, a desire for comfort took hold of him and he gradually couldn’t get up early in the morning to practice the exercises. He would doze off during Fa-study, and fell asleep while sending forth righteous thoughts. This state lasted more than 10 years, and he painfully came to the realization that he no longer gained inspiration from the Fa and his body was aging the same as an ordinary person. He became aware that this might be a life-and-death test for him, so he was determined to break through.

Starting about five years ago, another practitioner paired up with him to study the Fa and practice the exercises in the morning. But it was difficult for him to keep pace and he often felt sleepy while doing the exercises. The situation changed in 2020 when the COVID pandemic spread throughout the world and more people wanted to learn Falun Gong. Li Cheng-hsiung joined other practitioners to teach new students the exercises and answer their questions. Through this, he studied the Fa with more concentration and gradually regained the heart he had for cultivation when he first started practicing.

He had a significant breakthrough over the past two years. During the process, he has felt encouragement from Master, and the principles of the Fa have become clearer and more comprehensible to him.

He gave an example that he used to treat conflicts as interference and didn’t look within to see if he had any human notions or attachments. After his breakthrough, he regarded every conflict as an opportunity to improve himself. Through looking within, he realized that he had been looking down on others because he had a legal background and strong logical reasoning. He would not take criticism, and he often uses logical debates to “fix” others. Layer by layer, he gradually let go of these human notions and behaviors.

Li realized that there are different levels in cultivation and he experienced the joy of improving his xinxing. 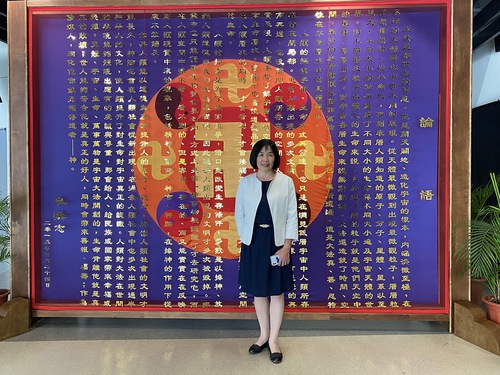 School teacher Ms. Guo Yu-ping received a flier about Falun Gong at National Central University in Taoyuan City twenty years ago. She then attended a free nine-day Falun Gong class at her school and started her journey of cultivation practice. She has always looked within when she encountered any challenges, and she has reached a conclusion that all emotions are human notions and it is a good opportunity to cultivate xinxing when encountering things that don’t go well.

She also noticed that cultivation has levels. In the beginning, she had looked within herself for attachments. Her intention was to benefit herself. Later, she began to think where she could be more considerate of others. Recently, she looked within to find out what human notions had prevented her from being considerate of others. At her current level, she is looking within to let go of herself and benefit others.

Her work and family environment harmonized as she improved her xinxing level. In the past, she always had pupils with bad tempers in her class, but now she finds that her students are all very well-behaved. And her entire family agrees that Falun Dafa is good.

Seventy-year-old Yang Yue-lan looks 20 years younger than her age. Yang shared some stories from her 24 years of practicing Falun Dafa with the audience at the Fa-conference. 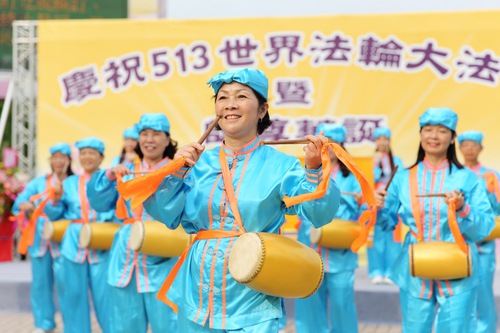 When her husband brought home a flier about a free nine-day Falun Gong teaching class, she couldn’t believe it would be free so she accompanied him to the class to find out what the catch was. The result was that her husband experienced a strong energy field and started practicing Falun Gong. She joined him but immediately felt drowsy after she opened the book. He challenged her, “Other people can, why can’t you?” She accepted his challenge and kept reading. That night she had to use the toilet six times, but felt more energized the following morning. Since then, she has never felt sleepy while reading the Fa. 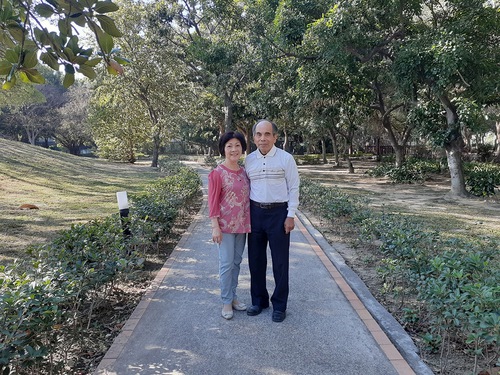 Yang Yue-lan and her husband

Yue-lan has broken through many human notions and concepts, including the concept of “aging,” in her cultivation. In the past, she had a lot of illnesses and thought she was too old to learn new things. However, practicing Falun Gong and studying the Fa has given her wisdom and rejuvenated her body. She has learned many new things and keeps acquiring new skills. Seeing how much she has changed, her friends and neighbors believe that Falun Dafa is good and have praised the couple for being a model couple, because they are both so healthy and happy.

Yue-lan said that she has persisted in doing the three things every day: studying the Fa and doing the exercises, sending forth righteous thoughts, and clarifying the truth. At 70 years old, she is very energetic with no ailments. She has experienced Master’s compassionate care and her xinxing has been uplifted in the Fa, and has made her cherish Dafa all the more.