(Minghui.org) Today's news from China includes incidents of persecution that took place in 8 cities or counties in 7 provinces, where at least 13 practitioners were recently persecuted for their belief. 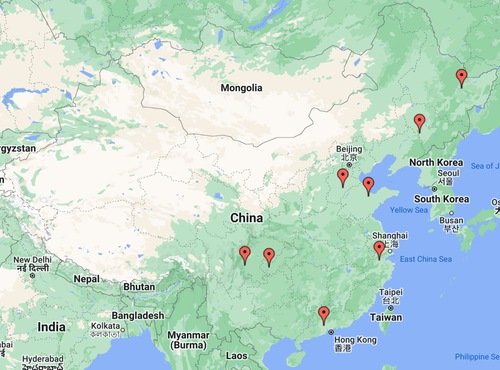 Mr. Wang Dawu, Ms. Wu Xiangbing, Ms. Jin Meihua, and Ms. Fang Yujuan were arrested at the end of September 2022. Mr. Wang , Ms. Wu, and Ms. Jin were formally arrested by the Gongshu District Procuratorate on November 1, 2022. Ms. Fang was taken to the Qingbo Police Station from the detention center that day. She was released on bail pending trial after her family paid 2,000 yuan in bail.

Ms. Zhang Xia from Beijing was arrested in front of her home in the Dongfeng District in Jiamusi City by officers from local police station at the end of October 2021. The officers ransacked her home, seized a copy of Zhuan Falun, computer, printer, cellphone, and other items. She was given criminal detention and is being held in the Jiamusi City Detention Center.

Ms. Li Fengzhen, 67, was arrested at home by officers from the Zhongxing Police Station in October 2022. Her whereabouts are unknown.

Mr. Wang Hong, in his 40s, of Tangba Town, was continuously harassed by clerks from the town and residential committee after he was released from brainwashing center on December 18, 2017. He left home for his safety and moved from one place to another.

He was arrested in 2022. His family was notified on October 23, 2022, that they could come to the Yubei Police Department retrieve his money which was seized during his arrest. He is being held in the Yubei Detention Center. His family is not allowed to visit him or send him clothes.

Ms. Han Xinzhen was harassed at home by two officers from the Houzhen Police Station and three from the Domestic Security Division on October 19, 2022. They ransacked her home from 3-10 p.m., seized her Falun Gong books, and a picture of Falun Gong’s founder. They threatened her and tried to force her to sign a document. She refused. Her daughter, who was afraid that she would be persecuted again, signed it for her.

Huang Weihong (gender unknown) was harassed and Huang’s home was ransacked by police on April 8, 2022. On October 24, 2022, Huang was stopped by railway police and held in a railway station, with hands and feet shackled, for an entire day. Huang was interrogated, but was finally released on bail pending trial. Huang’s family was frightened, so Huang left.

Mr. Duan Fanghe, 75, was under police surveillance during the 20th National Congress of Chinese Communist Party, from October 16 to 25, 2022. The Changshengqiao Police Station had two people stationed at his door from 8 am-6 p.m. every day.

Ms. Liang Guijuan’s husband received a harassing call from an Anxi District community officer after 3 p.m. on October 27, 2022. The officer demanded his wife’s phone number and address. He was harassed by local security before the 20th National Congress of Chinese Communist Party.

Ms. Lan of Gucheng County was arrested on October 23, 2022 by plainclothes officers from the Zhengkou Police Station for talking to people about the persecution of Falun Gong. They dragged her into a police car. They used photos to locate her home and confiscated her Falun Gong books, a picture of Falun Gong’s founder, and other items.

Ms. Pan was arrested by plainclothes officers at the same place on October 28, 2022. The officers searched her home, but they did not find anything they were looking for. Her family picked her up from the police station.