(Minghui.org) The University of Delaware Community Day was held on September 18, 2022, and Falun Dafa practitioners set up a booth on the campus in Newark to introduce the practice to the public.

The City of Newark’s Parks and Recreation Department, in cooperation with the University of Delaware, presented the area’s premier fall festival.

Sharon Bruen, the recreation supervisor, said the organizers were happy that practitioners were able to participate in this event, which attracted thousands of people.

Many attendees learned the Falun Dafa exercises at the booth. Many expressed their support for Falun Dafa and condemned the persecution in China, including a state representative and a U.S Congressional candidate. 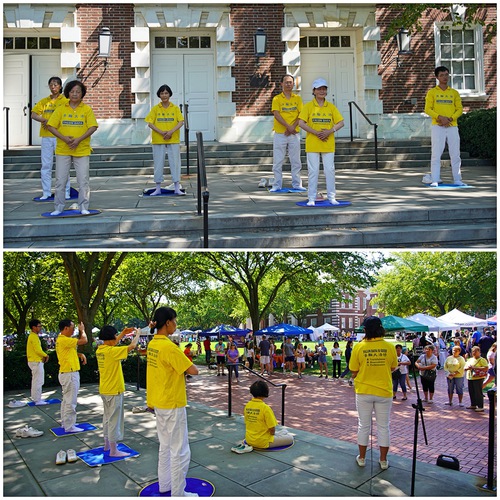 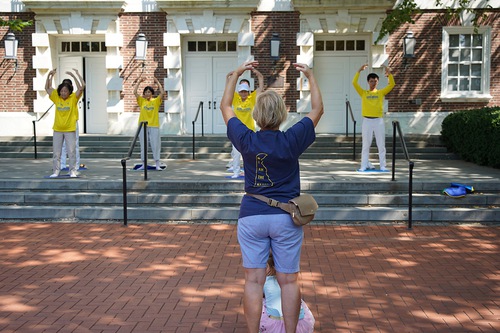 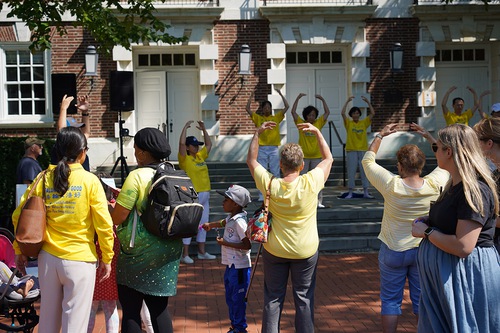 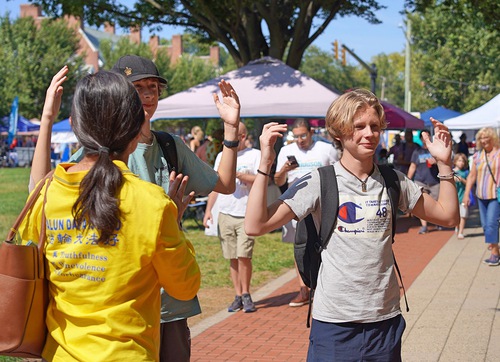 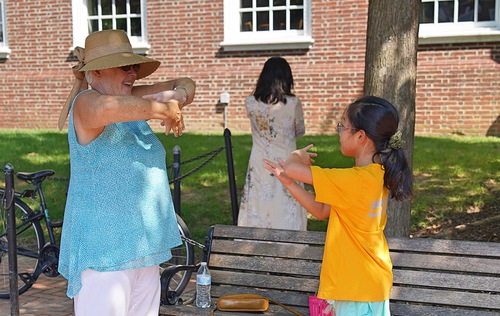 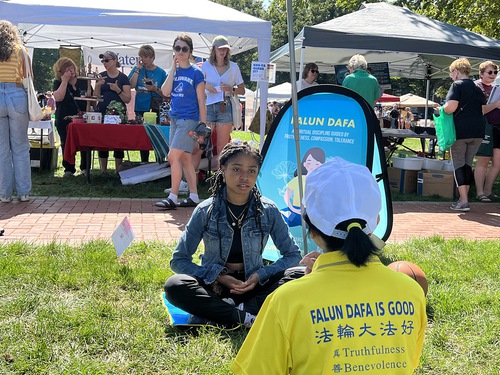 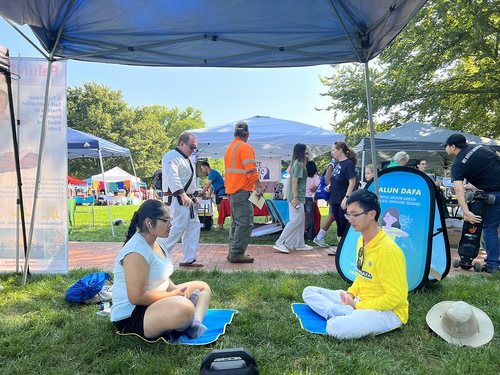 Experiencing the Tranquility of the Practice

Falun Dafa practitioners demonstrated the five sets of exercises accompanied by the tranquil exercise music. The peaceful scene attracted the attention of many people and some began to follow along with practitioners’ movements.

Susan Williams, a retired math teacher, felt very relaxed after learning the exercises. “The exercises have the ability to relax one’s body,” she said. “It is like a golden moon that makes everyone happy.” She asked practitioners for more information about Falun Dafa. 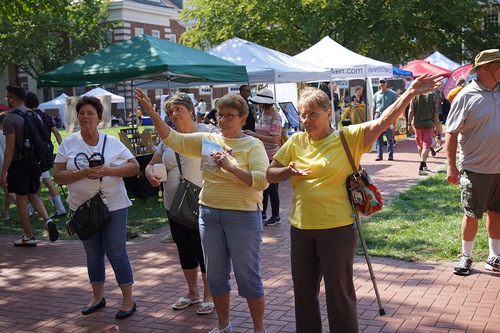 Rosalie Wynell, a retired nurse, and her friend Marlene Carry followed along with practitioners’ exercise movements for a long time.

Rosalie said, “I feel at peace and calm. I would like to continue practicing it.”

Marlene said, “I have back pain and I hope this practice will help.”

Rosalie and Marlene found it unacceptable that the Chinese Communist Party (CCP) is persecuting Falun Dafa practitioners in China. They said that people in China should have religious freedom. 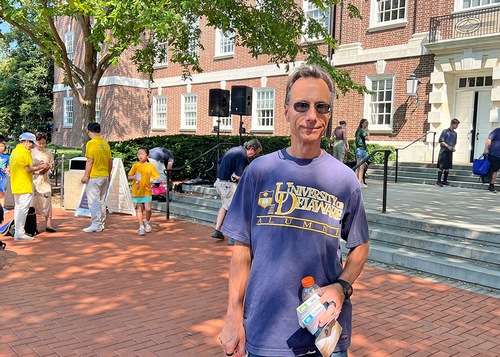 Ken, an alumnus of the University of Delaware, watched practitioners’ exercise demonstrations and said, “This is a way to alleviate stress.”

Ken, an alumnus of the University of Delaware, commented after seeing practitioners’ exercise demonstration, “This is a way to alleviate stress. I feel that this practice can help me achieve better mental health and find inner peace.”

After learning more about Falun Dafa and the CCP’s ongoing persecution, Ken said he knew a little bit about Chinese history since he majored in history in college. He said, “We perceive Hitler as the most negative figure. However, many people do not know that Stalin killed more people than Hitler. Mao Zedong killed even more people than both Stalin and Hitler combined. Therefore, I would use one word to describe the CCP—‘evil.’”

Lexi Isizarry, a student from the University of Delaware, and her friend, James Gasparini, watched practitioners demonstrating the exercises for a long time.

“I feel relaxed,” James said. “The host introduced Falun Dafa well. It was a good experience and it made me feel calm.”

“This persecution should not be allowed to happen,” James said. 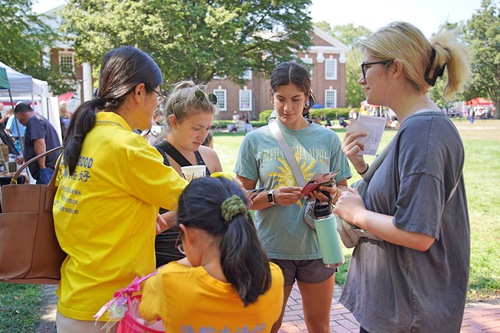 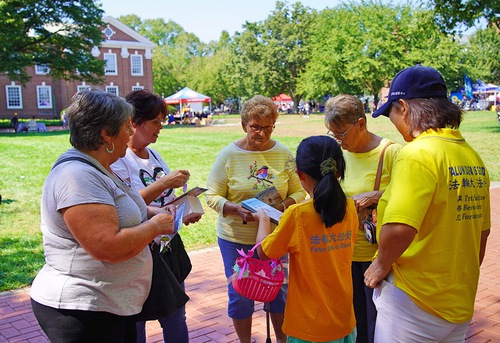 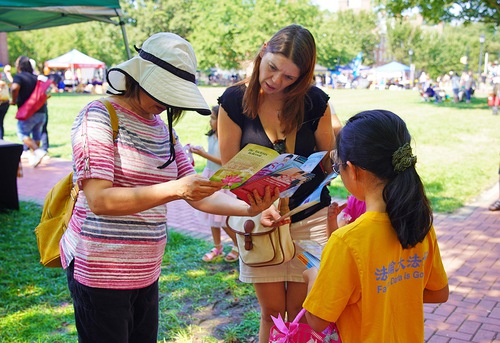 State representatives and U.S. Congressional candidates participated in the event. Many expressed their support for Falun Dafa after becoming aware of the CCP’s persecution. 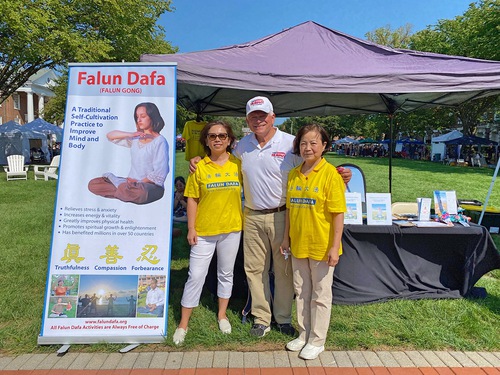 Mr. Murphy said, “The CCP is our greatest enemy. We all know about this. They are a threat to free countries. We need to stand up and protect human rights.” 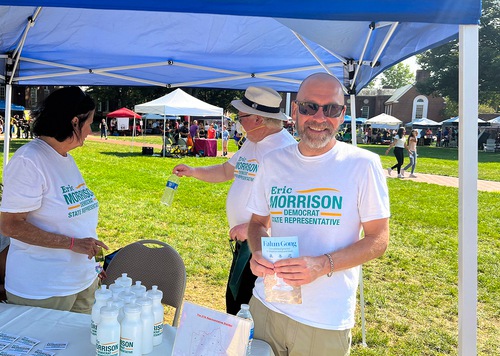 Eric Morrison, Delaware state representative, expressed his support for practitioners in ending the persecution. He said he is against everything that suppresses human rights.