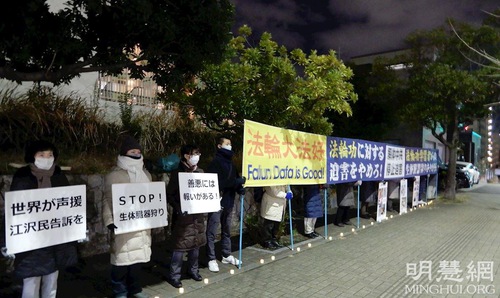 Falun Gong practitioners in Kumamoto held a peaceful protest outside the Chinese consulate on New Year’s Eve. They called for an end to the ongoing persecution.

In fact, after Mr. Li Hongzhi gave public lectures on Falun Gong in China in 1992, hundreds of millions of people have taken up the practice. Their health and moral values improved and people respected and were grateful to Master Li for teaching Falun Gong. However, out of jealousy, Jiang Zemin started an unprecedented campaign of genocide targeting Falun Gong practitioners.

In the 22-year-long persecution, Falun Gong practitioners in China and around the world have been resisting the injustice through rational, peaceful means. By clarifying the facts about Falun Gong and the persecution, they awakened countless people who were misled by the CCP’s propaganda.

That day, practitioners gathered outside the Chinese consulates in Nagasaki and Fukuoka. They held banners and display boards exposing the CCP’s unjust treatment of innocent, kind people as well as the terrible crimes of organ harvesting from illegally detained Falun Gong practitioners.

To date, in the Kyushu region alone, over 530,000 people have signed the petition calling for Jiang Zemin to be brought to justice.

A practitioner who participated in the protest said, “We hope more people can learn the truth and help stop the persecution.”

“Reported in 2021: 132 Falun Gong Practitioners Die in the Persecution of Their Faith”