Sydney’s Tianti Bookstore is located in Darling Harbor in the city center between the Chinese Garden and Townhall train stations. During the pandemic, whenever the government allowed business to resume, the Tianti bookstore proved to be a haven for people who were concerned about their health and improving their immunity.

The bookstore reopened on August 12, 2021, and after the city ended its lockdown period on December 15, 2021, the Tianti Bookstore resumed holding free nine-day workshops regularly. 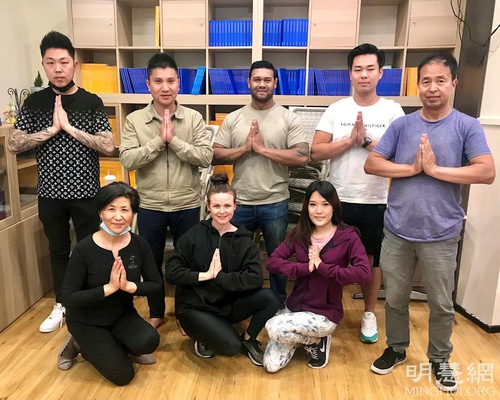 New and veteran Chinese and Western practitioners exchanged their feelings and experiences after listening to Master Li Hongzhi’s lectures and practicing the exercises. Everyone said that they benefited a lot and thanked Master and Dafa from the bottom of their hearts. 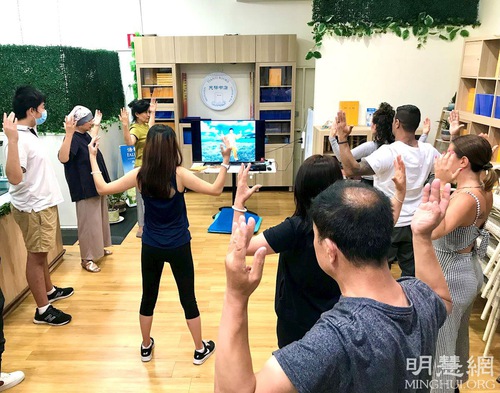 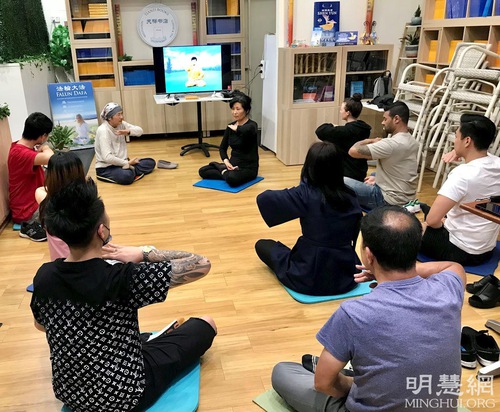 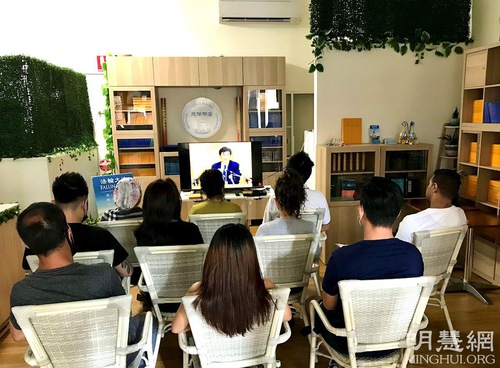 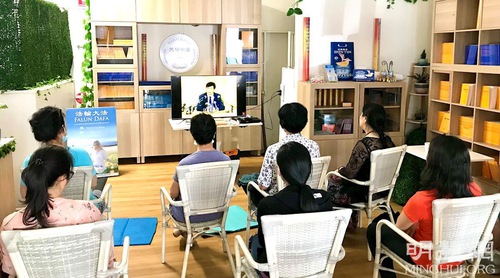 Young Businessman Shares His Personal Experience After Returning to Cultivation

Falun Dafa’s Master visited Sydney a few times and lectured from 1996 to 1999. During that time, five-year-old Li Wei and his mother had the chance to listen to Master lecture. Li Wei practiced Dafa until he was 13 years old. Then, he became influenced by society’s downward slide and stopped cultivating.

Seventeen years have passed, and Li Wei is now a businessman. He said that although he stopped practicing Dafa, he knew in his heart that Master has always been paying attention to and looking after him. Looking back, Li Wei said, “I felt that I lost direction and sometimes I felt very tired. I felt so lost in my heart.”

A month before attending the nine-day workshop, Li Wei had a feeling, “I need to return to cultivation.

However, a week before the workshop started, Li Wei had a strange and scary dream, “I saw that I was in a dark, cold and wet place, being detained in a place that seemed to be a prison.” He recalled that a person who looked like the leader wanted to give him some nice things, but Li Wei rejected the person and said, “No! I already have a Master! I cannot follow you.” Although Li Wei was scared in the dream, when he woke up, he felt very happy that he had chosen to follow Dafa’s Master and the righteous path.

Despite deterrences, Li Wei brought his mother, girlfriend and younger brother to attend the nine-day English workshop. Li Wei’s girlfriend, Vivian, often suffered from nightmares before attending the workshop, but after attending the workshop, her nightmares ceased and she no longer suffered from insomnia. What made Li Wei even happier was that Vivian also started to read Zhuan Falun and practice the exercises every day.

Li Wei said, “After attending the nine-day workshop, I feel that many bad substances in my body have disappeared. Every time after I practice the exercises, I realize that my body feels light, my mind is clear and I feel calm. I now feel that I am full of energy.”

Li Wei said that he wants to cultivate diligently this time and put his heart into clarifying the truth so that he can help more people to understand the goodness of Falun Dafa.

“When I recall the past now, I can clearly see that there are many bad things outside. Many people in society are still wandering in confusion. These people do not know their true direction in life, just like me in the past. Today, I am very happy that I can return to cultivation. I understand the path that I want to take and I am no longer lost and confused like I was in the past.”

“Zhuan Falun Really Can Save People”

Li Wei’s mother, Zhuo Ya, spoke about her amazing experience when she first came into contact with Falun Dafa around 1996. She recalled that at the time she took one night to finish reading the whole of Zhuan Falun. However, the next day, she realized that she could not get out of bed. Her throat was sore and she had a fever. Her son was only seven years old at the time. When her husband who dealt with medicine called her from out of town and learned about her condition, he thought she was seriously ill and called her brother to help take her to the hospital.

However, when her brother learned about her situation, he said, “This is very good as this is getting rid of karma. She will recover in a while so there is no need for her to go to the hospital.”

After hanging up the phone, Zhuo Ya said, “The relationship between us siblings is very good. I believed what my brother said and I told my child to come and see me in five minutes. If I showed no response, then he could call his uncle to come.” After that, Zhuo Ya lay on the bed and called out in her weak voice, “Master, quickly save me, or else I will die.”

Just as Zhuo Ya finished saying that, she saw Master’s Li’s fashen appear before her and wave.

“I really saw Master Li’s fashen appear before me. He gave a wave and a falun turned and turned in front of me. I saw three lifetimes of mine. I saw that I used to be a taoist, and my brother was too. After that, I immediately recovered and no longer hurt anywhere. The fever subsided and I could even get out of bed. Just as my brother said, I recovered a few minutes later. I immediately called my brother and told him that this book is real, it really can save people.”

“I Felt Energized and Much Happier!” 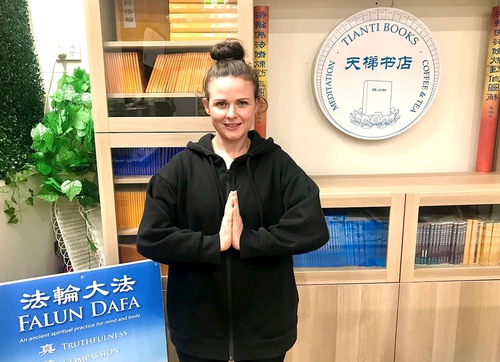 Western practitioner Katie Hunt learned about Falun Dafa after she watched a documentary a year ago. She recently went for some acupuncture, and her acupuncturist suggested she attend the nine-day workshop.

“The nine-day workshop is well-organized. After attending the workshop, I learned many new things. I understand that the most important thing that Master said is that we must get rid of our attachments and negative matter. In the past, when conflicts happened and when I was very angry, I often could not control my anger. After listening to Master’s lectures, I know how to control myself now. I also discovered that after attending the nine-day workshop, I feel even more energetic and happy,” she said.

Katie bought Zhuan Falun and started reading it. “When I first started reading this book, many questions appeared,” she said. “However, as I continued to read on, the more I read, more questions would be answered. After completing the workshop, I will continue to practice the exercises and read Zhuan Falun every day because Falun Dafa has benefited me a lot. I will introduce it to my mother and get her to learn Dafa.”

Teresa Li, a Falun Dafa practitioner who does graphic design, attended Tianti Bookstore’s nine-day workshop for the first time. She said, “The reason why I was able to persist until now is because every time I finish listening to Master’s lecture, I am always filled with righteous energy when I get home. I feel that I am full of motivation and hope. Even if it was raining or that segment of the train was not safe, I would still persist to come and attend the nine-day workshop at Tianti Bookstore. This is because every time after I got home, I had the obvious feeling that my mind and body were once again being cleansed and elevated to another level.”

Both her parents passed away early due to cardiovascular diseases, so Teresa had a strong desire to do deep research about life and death. She had searched within the Buddhist tradition. About a year ago, Teresa was lucky to start cultivating in Falun Dafa. Not long after that, she felt that her palpitations and anxious moods that had been caused by stress all improved.

Alice Pan was a primary school teacher in China when she met a couple who practiced Falun Dafa. They gave her a copy of Zhuan Falun. This precious book led Alice to start on the path of returning to her true self in August 2018.

“After attending Tianti Bookstore’s nine-day workshop, I feel that my mind was more focused, my heart was more calm and my body felt different too,” Alice said. “There were a few times when my body suddenly felt that it was full of energy. Especially, when I watched up to the third lecture, my mind became more focused. On the way home, I felt that my brain was especially awake and my head felt lighter too.”

Alice said that her manager had originally wanted her to work overtime during the period of time that the workshop was to be held. However, because her wish to attend the nine-day workshop was relatively pure and steadfast, after finding out about it, the manager not only gave up the thought of getting her to work overtime, the manager even reminded her to leave early after work so that she could attend the nine-day workshop on time.

Alice felt that she had received benevolent support from Master. She brought her son Jack along with her, and they were rushing for the train one day to attend the class. It had seemed impossible that they could board the train on time but they miraculously managed to board it and reached Tianti Bookstore punctually.

Jack said, “The Tianti Bookstore’s energy field is good. I believe it may be different from watching the lectures by myself at home.”

Jack, 12, also said that after cultivating in Dafa, he tries his best to abide by Dafa’s standards of Truthfulness-Compassion-Forbearance in his behavior, be it at home or in school.

“Especially Dafa’s Fa principles of Compassion and Forbearance, they have helped me change a lot. You do not know how much I have improved. Now, I generally won’t hit others. Otherwise, I know what kind of person I will be when I grow up.”

Jack also said, “I now find it easier to quiet myself down to do things, especially to do things that require time and patience such as making models, etc. In the past, when I ran out of patience, I would get upset and feel all bottled up. Now the situation is much better and I have patience now.”

The Sydney Tianti Bookstore will hold free Chinese and English Falun Dafa nine-day teaching workshops regularly and the bookstore welcomes everyone to come and register to attend the classes.

“Practitioner in Australia Thanks Master Li for Curing Her Depression”