A number of American and Polish audience members expressed appreciation for the opportunity to enjoy Shen Yun during the pandemic. Not only did they find the performances visually stunning, they were also touched by the true beauty, diversity, and depth of China's five-millennia civilization presented throughout the program. 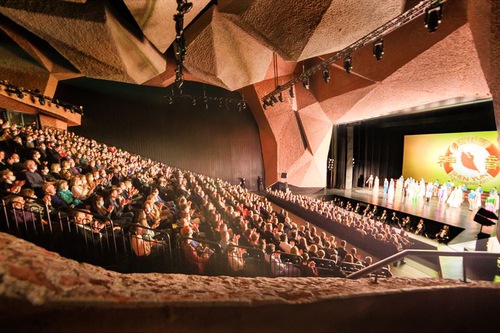 The Shen Yun Global Company at the CKK Jordanki Concert Hall in Toruń, Poland, on the evening of January 21. The company presented three sold-out performances (including one added) in Toruń on January 20 and 21. (The Epoch Times) 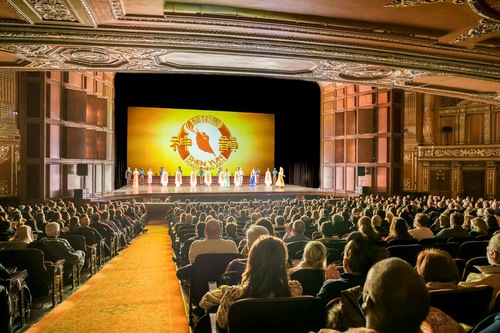 The Shen Yun World Company at The Benedum Center for the Performing Arts in Pittsburgh, Pennsylvania, on January 22. The company presented four performances in Pittsburgh from January 21–23. (The Epoch Times) 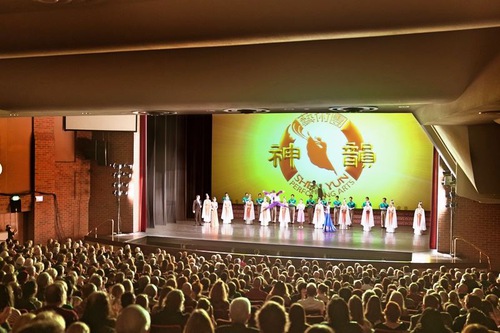 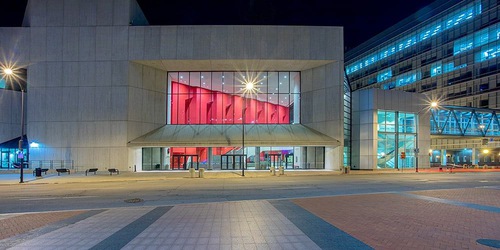 Former First Lady of Iowa: “I Love the Performance” 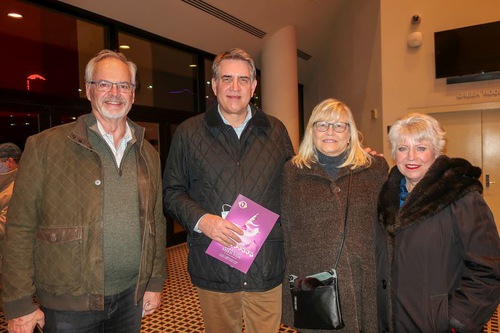 “I love the performance... It was beautiful,” said Ms. Branstad, the former First Lady of Iowa. She is the wife of the former ambassador to China and former Iowa governor, Terry Branstad.

Accompanying Ms. Branstad at the performance were Bill and Lynn Frank, and Mr. Churchill, the former chief of staff at the Beijing Embassy.

As people who have lived in China, Ms. Branstad and Mr. Churchill shared their thoughts on Shen Yun's presentation of China’s culture before communism.

“It definitely portrays China before communism... When you look at what the lyrics were for the songs and when it talks about the divinity, that’s certainly something that we wouldn’t see today,” Mr. Churchill said.

Ms. Branstad said the performances were absolutely outstanding and agreed that they would not have been able to see the traditional values depicted in Shen Yun in today’s China.

She also praised the presentation of divinity and spiritual themes in the performances.

“We who definitely have faith in this country—it was very nice to see that portrayed because, like Mr. Churchill said, you did not see a lot of religion and faith [in today’s China],” Ms. Branstad said.

“Everybody is ready to be finished with the pandemic. And so any chance we have to go out and be with people and see a wonderful performance is good, as we’re anxious to get back to living life,” she said.

“I loved it. You can see the history in it and the beauty and how delicate it was, but how strong at the same time—and the colors. It was really nothing like I ever saw in China so it was really special,” he said. 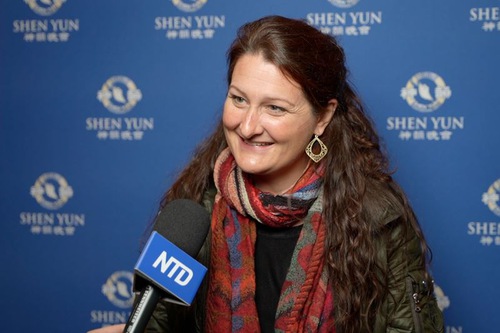 Marylene Gingras-Roy, a violist in the Pittsburgh Symphony Orchestra, saw Shen Yun in Pittsburgh on January 22.

Gingras-Roy is a chamber music performer and teaches at Duquesne University and at her private home studio, and is a viola coach for the Three Rivers Young Peoples Orchestra and the Pittsburgh Youth Symphony.

“I absolutely loved it... The music is beautiful. The orchestra sounded amazing. And I really enjoy the erhu player,” Ms. Gingras-Roy said.

“The dancers, the colorful costumes, and the graphics were really beautiful.

“I see elegance and [the movements are] very delicate. All the movements are just really gorgeous. They’re so synchronized... I can tell they work really hard to be together,” she said.

Mayor of Toruń: “Compelling” and “Fantastic” 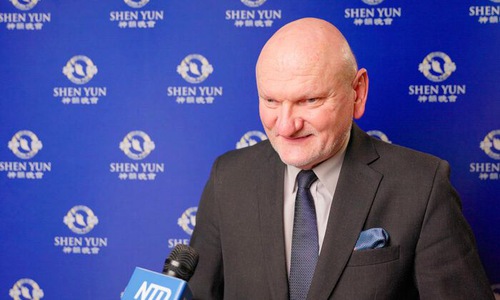 Mayor Michal Zaleski of the City of Toruń at the Shen Yun performance in Toruń, Poland. (NTD Television)

Mayor Michal Zaleski of the City of Toruń saw Shen Yun in Toruń, Poland, on January 20. He commented that Shen Yun dancers are world-class.

“We are happy to host this performance in our city in Toruń, a city full of monuments, but at the same time full of love for artistic values, for ballet, theater, opera, [and] everything that can be found and seen in our city,” Mayor Zaleski said.

“Toruń residents and also numerous guests who came here to see this performance in our city watched with admiration the thousand-year value of dance, the dance that was brought from China.

“The artists who presented the beauty of the arts of China, historical China, found their way to the hearts of the audience (and) to our hearts... We were able to watch with joy the origins of the beautiful Chinese culture from thousands of years ago,” he said.

Catholic Nun: “The Purity of Souls” 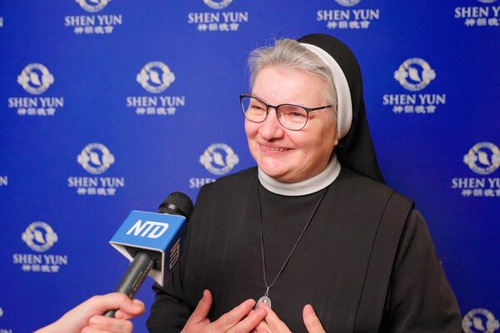 “Fantastic, wonderful. You can see in all dances the purity of souls of those performers who dance. Artists just want to give their best on stage to convey the beauty to others,” Sister Rybus said.

Shen Yun artists believe that cultivation of the heart is the way to create art that is truly sublime, according to the company website.

Sister Rybus knew a little bit about Eastern arts because she worked for many years in Siberia, Russia, near Mongolia–which borders China–and during that time she met Chinese people. But the Shen Yun performance surpassed her expectations.

“I am fascinated by their performance and I will certainly look forward to seeing their new repertoire next year.”

“If a man lives in harmony with God, with nature, with other men, [then] he has inner peace. This inner peace emanates from our face, our eyes, [and manifests itself) in contact with other people. It seemed to me that even (Shen Yun's] songs conveyed that we should keep going towards the good, the beauty of this Sun–as God is,” she said.

Sister Rybus explained that what some people describe as Sun or a higher force for her that is simply–God, Creator of Heaven and earth.

“I did not even expect that what is ancient is so tightly connected to what is modern. Amazing, beautiful experience. I can only suggest to everyone who wants to see (this performance) that it’s worth it,” she said.

Sister Rybus was thrilled by how the artists performed what was unearthed from five thousand years of civilization and how it was transposed to the stage to show it to today’s people.

“I think that this [artistic] expression is a mission. It is simply conveying to the modern man that only in harmony with that beauty that is in human nature, with the right—can we create something in the world—something good.

“If we will feed on this good, beauty, these aesthetics, the goodness that should emanate from us will grow in us... We will continue to go towards this good, towards this perfection, so nothing could separate us from God and we would simply live in one great harmony with God and with people,” she said. 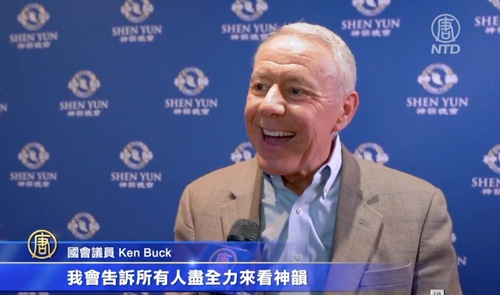 “It’s really heartwarming... The music was beautiful, but what I really loved about it was the cultural aspect, how the Chinese culture was displayed and accepted by the audience. I really felt that it was a special moment here to see that,” Representative Buck said.

“It was such a positive message that was given, the song about what’s so important on Earth and that in there are things that are more important than what we do here on earth.

“The music was really special. It’s also a fusion of Eastern and Western music, and that was really heartwarming... It was some sounds that I’m not used to hearing when I hear a Western orchestra, and so that was part of the beauty was just to hear some of the different sounds,” he said.

He encouraged people to see Shen Yun, especially in these trying times.

“I do think that because we are challenged right now with the pandemic, and because we’re challenged in other ways that are very serious matters going on in the world, and there are serious issues here at home... I think people are depressed and really searching for something positive. And this performance was very positive and uplifting.

“I would tell everyone to do their best to try to see this performance and to make sure that they share it with their friends in the community because it’s great. If one person sees it, it’s even better if 10 people know the positive message.

“I think that whenever you have a group of people who are expressing themselves through art, and the colors were so bright, and the music was so beautiful, and the dancing was so talented, that it’s just uplifting, including the messages that were delivered with the compassion and truthfulness and tolerance and all of the positive things that the stories portrayed. All bringing that together was really beautiful,” Rep. Buck said.

Mayor of Pittsburgh Issues Proclamation: “Beautiful in Many Ways” 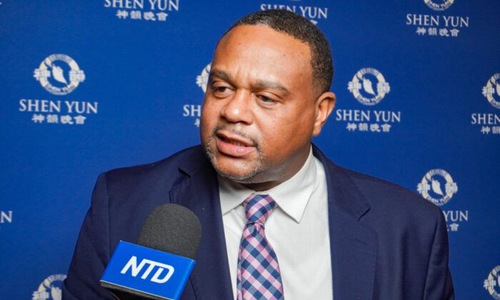 “I really enjoyed the power of overcoming—that message of overcoming, the whole situation where you never give up,” said Mayor Gainey.

“It’s thought-provoking. You use your divine inner spirit to continue to grow, even in the midst of adversity. That came through large and I really appreciated that message,” he said.

Mayor Gainey believed that all history is great and that China’s divine culture, as portrayed in Shen Yun’s performance, should never be destroyed.

Shen Yun performers practice Falun Dafa, an ancient spiritual way that combines a series of gentle exercises with meditation and a belief system based on Truthfulness, Compassion and Tolerance.

Mayor Gainey could see that the performers were inspired by their practice.

Mayor Gainey appreciated that Shen Yun came to Pittsburgh and that he was able to attend.

He felt people who came to see Shen Yun would be inspired. “And I’m always about how do we inspire people because I believe when you inspire people, you bring the best out of them.” 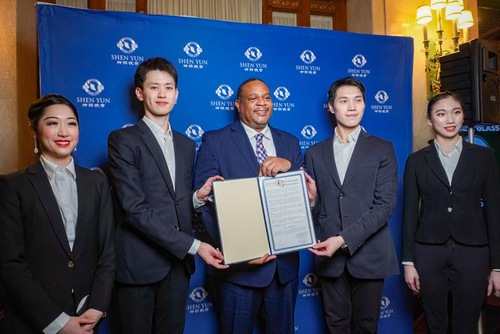 After the Shen Yun World Company's curtain call on the afternoon of January 23, Mayor Gainey of Pittsburgh presented the performers with a proclamation, thanking Shen Yun for blessing the city and for the wonderful performance. (NTD Television)

Proclamation from Mayor of Greeley 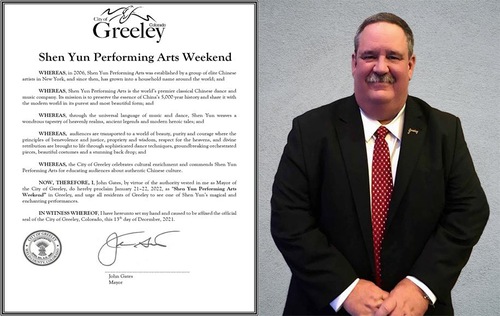 “WHEREAS, audiences are transported to a world of beauty, purity and courage where the principles of benevolence and justice, propriety and wisdom, respect for the heavens, and divine retribution are brought to life through sophisticated dance techniques, groundbreaking orchestrated pieces, beautiful costumes and a stunning back drop;

“NOW, THEREFORE, I John Gates, by virtue of the authority vested in me as Mayor of the City of Greeley, do hereby proclaim January 21-22, 2022 as “Shen Yun Performing Arts Weekend” in Greeley, and urge all residents of Greeley to see one of Shen Yun's magical and enchanting performances.”

“My Mission Is to Save Sentient Beings”