(Minghui.org) “After the doctor turned off the life support and oxygen, I went to the afterworld and back. Master Li Hongzhi, the founder of Falun Dafa, saved me. At the time I hadn’t started to practice Falun Dafa,” said 62-year-old Sonja, a healthcare worker in Germany. She couldn’t be more grateful, “My life was given back to me.”

After she had a near-death experience, Sonja had a new life and a revelation. She said that she found her way back to her true home. 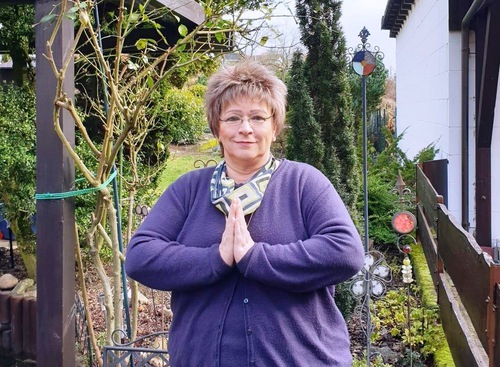 When Sonja had two wisdom teeth pulled at the end of 1995 she felt something went wrong but wasn’t sure what it was. A few days later she had a fever that wouldn’t go away. She went to a hospital and the doctor checked her mouth after she told him that she just had her teeth pulled. The inside of her mouth appeared black. Further examination found out that she had an infection and the bacteria had already spread throughout her body.

“Several days later I lapsed into a coma. For the next four weeks, I relied on a ventilator to stay alive. The doctors did not think that I would recover and decided to turn off the ventilator.”

At the time Sonja was 35 years old and had a 10-year-old son. She had many difficulties in life and her son was all she had.

When the machines were turned off Sonja had no vital signs, but she was wide-awake in another dimension.

Judged in the After Life, a Compassionate Voice Defends Her

“I heard a voice telling me to go with him. I told him that I couldn’t because my son was so young. ‘I am the only one he has and I have to stay here and take care of him,’ I said. The voice was warm and kind but firm. He told me, “Your thoughts are correct here, and only here. We will take care of your son, better than anyone can. Will you come with us?’” With this promise, Sonja agreed to leave.

“I entered a fast elevator. It felt like it could go up a thousand floors in a minute. I entered a room but couldn’t see the walls. The white and golden rays were bright but soft. I heard music and felt warm and content. I felt like a drop of water that returned to the ocean.

“I was in an isolated chamber where no one could enter. I felt protected and I wasn’t scared or worried. I heard a voice from a courtroom. People were hearing my case. A plaintiff described how terrible I was and listed ten bad things I'd done. At the same time, the scenes he described were projected onto a screen as part of the evidence. I did all of them, big and small bad things. I felt so embarrassed that I wanted to dig a hole in the ground and hide. If I was a third party hearing what I did, I would definitely be punished.

“The voice ended, and the voice that had guided me there appeared,” Sonja said. “He sounded like my lawyer. He said that I was a wonderful person and listed ten good things I did, even the small things. Again, everything he described was projected onto a screen. Some of the trivial things I had already forgotten. After listening to his defense, I felt that I did well.”

After the defense, Sonja heard many voices discussing whether they should let her go back to where she came from. “They weren’t sure if I would make it. My ‘lawyer’ spoke again and I realized that he wasn’t just my lawyer but also the person who made the final decision. He wanted me to go back and continue my life.

“He told me, ‘If you agree, you can go back to your world. Going back to your body and extending your life is easier than letting you reincarnate. This way, you will be able to make it. I promise it will be successful this time.’

“Make it to what and what will be successful?” Sonja didn’t understand. Nonetheless, she felt that the voice had penetrated to her soul. “In my whole life, I have not felt such deep trust, hope, warmth, and compassion. I felt that I was saved and I wept.”

At that moment Sonja was back in the hospital. She opened her eyes and saw the clock on the wall. Only ten minutes had gone by. Seeing that she had regained consciousness and started to move, the doctors were in disbelief.

The experience changed Sonja. “After the near-death experience, I cared little about interpersonal conflicts. My only wish was to find the person who gave me my life back, follow his guidance, and finish my mission. I knew that I would find him because he let me back to the world.”

Finding Master and a Beautiful Life

In August 1997 Sonja felt unsettled and wanted to go shopping, but she had no idea what she wanted to buy. A force drew her to the city center, from one store to another, trying to find what it was.

She walked into a supermarket and started to flip through the magazines. She turned to a color page and stopped. “I saw Master’s photo. He had on golden exercise clothes. I knew that he was the person who'd defended and vouched for me. I cried like a baby.”

The article in the magazine was about Falun Dafa. She contacted the local Chinese practitioners based on the information in the article.

Twenty-five years went by and Sonja’s life is no longer the same. “No words can express my gratitude to Master Li. Through practicing Falun Dafa, I became peaceful. I offer sincere help to everyone around me, no matter how they treat me. I stopped arguing with others, I just wish them well.”

She remains in the healthcare system and helps minority groups. Her son has grown up and now has his own family. Even how she looked changed. She used to practice self-defense. Now she is slightly overweight and looks friendly and less intimidating. Many past acquaintances have trouble recognizing her.

“Through practicing Falun Dafa and following the principles of Truthfulness, Compassion, and Forbearance, I realize how marvelous life is. I truly hope more people can learn it. I wish Master a Happy Chinese New Year! Thank you, Master!”

“I Witnessed Dafa’s Miracles After Letting Go of Human Notions”