(Minghui.org) Practitioners from the Mexican city of Puebla introduced Falun Dafa at an organic market on January 15, 2022. Through holding various activities, local practitioners presented the benefits of the exercises, Dafa's principles for moral improvement, and exposed the persecution of the spiritual practice by China's communist regime.

The outreach event took place in Tameme, an organic market where a Falun Dafa practice site has long existed. Many other Falun Dafa related events have been held there over the years, in order to tell people about this ancient cultivation path to mental and spiritual improvement—which is based on Chinese traditional culture.

The event on January 15 was the first activity that practitioners held in this market in 2022. The market administrator praised practitioners and said they had, “A lot of enthusiasm.”

Practitioners demonstrated the Falun Dafa exercises. Many people these days are interested in improving their physical condition and quality of life. Practitioners explained that the five sets of exercises include meditation, and are accompanied by relaxing music that helps one enter into a state of tranquility. 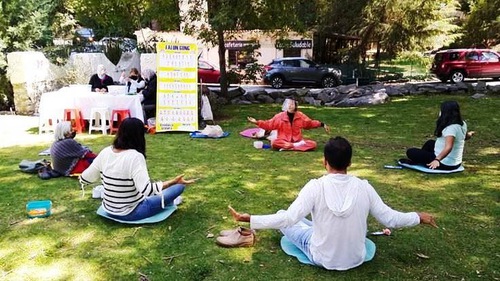 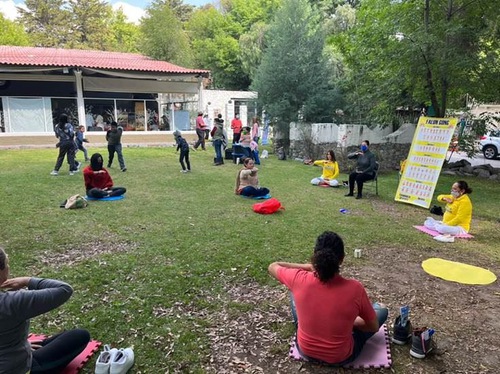 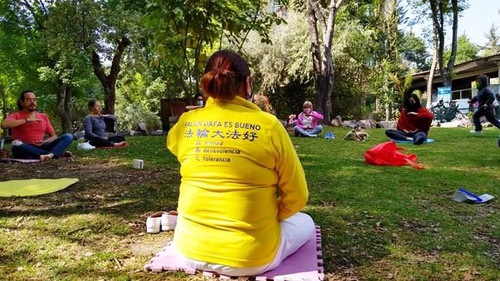 Practitioners taught people to do the fifth Falun Dafa exercise at the Tameme Market in Puebla on January 15, 2022. 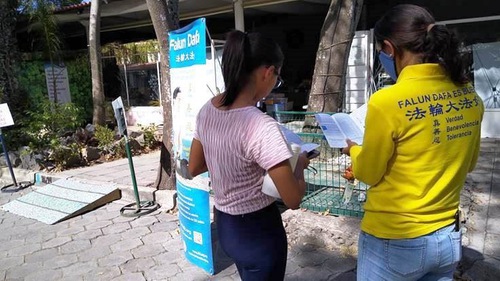 A passerby talks to a practitioner about Falun Dafa.

A person who practiced other meditation systems and tried Falun Dafa exercises for the first time said that when he did the meditation he felt his pain diminish. He was very impressed by the immediate physical effects and asked for more information about Falun Dafa.

The visitors to organic market learned about Falun Dafa’s principles of Truthfulness-Compassion-Forbearance, and how practitioners from all walks of life practice and have benefited. The practitioners invited people to participate in the group exercises that are held every Saturday in the market gardens.

A performance by the waist drum team wrapped up this first event of 2022. The performance was preceded by an introduction of Falun Dafa and its benefits in improving the immune system to counteract the impact of modern life and the current pandemic.

Practitioners also talked about the persecution of practitioners in China by the CCP (Chinese Communist Party) since 1999, which includes the forced organ harvesting from living Falun Dafa practitioners. 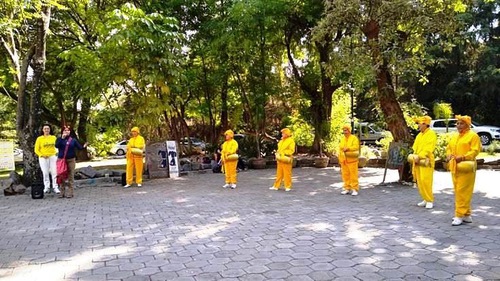 Market Administrator Lucia Tam (second from left), thanks practitioners and the Waist Drum team for introducing Falun Dafa at the Tameme Market on January 15, 2022.

Market Administrator Lucia Tam, visibly moved by the event, thanked the practitioners for introducing Falun Dafa. She praised them and said that practitioners showed “a lot of enthusiasm” and that the waist drums team played “with great pleasure and joy.”

Background: What is Falun Dafa?Falun Dafa (also known as Falun Gong) was first introduced to the public by Mr. Li Hongzhi in Changchun, China in 1992. The spiritual discipline is now practiced in over 100 countries and regions worldwide. Millions of people who have embraced the teachings, which are based on the principles of Truthfulness, Compassion, and Forbearance, and learned the five gentle exercises, have experienced uplifted health and well-being.