Home > Persecution > Accounts of Persecution
Man Secretly Sentenced After Being Reported by Village Secretary for Talking to Him about Falun Gong
Jan. 20, 2022 | By a Minghui correspondent in Hebei Province, China

(Minghui.org) A Dingxing County, Hebei Province resident was recently imprisoned to serve a three-year term for raising awareness about the persecution of Falun Gong, which has been targeted by the Chinese communist regime since 1999.

Mr. Wang Defu once had five ribs broken and became disabled and unable to work. He was often short of breath after walking a long distance or climbing a hill. After taking up Falun Gong, he completely recovered.

After the communist regime ordered the persecution, he was given two terms at Balizhuang Forced Labor Camp, where he was subjected to beating, forced labor and electric shocks. 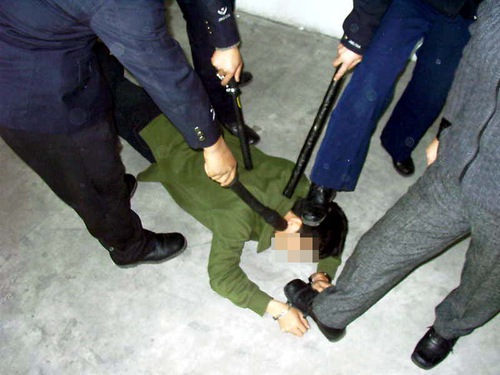 Mr. Wang was held in a brainwashing center in the Dingxing County in July 2012. He was forced to sit on a small stool without moving for long hours and watch slandering videos against Falun Gong until midnight every day. Sometimes during his sleep, the guards played loud noise or movies about horrific torture, causing him to be deeply traumatized.

Mr. Wang went to the nearby Xiaojinzhuang Village to talk to people about the persecution of Falun Gong on the afternoon of March 23, 2021. He ran into village secretary Xiao Shan, who refused to listen to him and hit his head against the wall. His head was covered with blood. Xiao called the police, who took Mr. Wang to the Liuzhuo Village Police Station. After a coronavirus test, he was taken to the Dingxing County Detention Center.

Mr. Wang’s family was never allowed to visit him or send daily necessities to him. A guard later revealed to them that Mr. Wang had been sentenced to three years and would be transferred to the Jidong Prison.

Shortly after, Mr. Wang’s wife received a letter from the prison, which stated that he was sentenced to three years on charges of undermining law enforcement (the standard pretext used to criminalize Falun Gong practitioners) and is now held at the Jidong No.4 Prison. Dated December 20, the letter also said that the prison sentence was determined by authorities in Baoding and had nothing to do with Dingxing County, which is under the administration of Baoding.

Mr. Wang’s sentencing left his family in deep distress. His mother had had back surgery and was only just able to walk on her own. His wife was saddened by his imprisonment. He also has an older brother, who is blind.

“My 80-Year-Old Brother is Protected”