(Minghui.org) Today’s news from China includes incidents of persecution that took place in 16 cities or counties in 9 provinces, where at least 20 practitioners were recently persecuted for their belief. 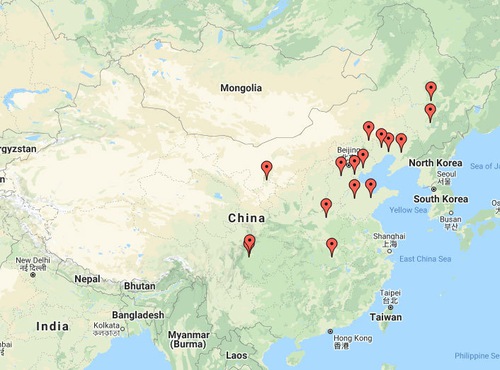 Ms. Wang Chunyan, from the Nangang District, was arrested on April 19, 2021. She was released on bail on May 19 and was then officially arrested on June 10. Ms. Wang was sentenced to three years in prison by the Harbin Rail Court in November 2021. She is now being held in the Harbin City Detention Center.

Ms. Chen Yujie, from Jincheng Town, was sentenced to five years in prison by the Linghai City Court in late November 2021. She is held in the Jinzhou City Women’s Detention Center.

Mr. Su Jiming and his wife, Ms. Song Zufeng, were told to go to the village committee on December 2, 2021. They were pressured to sign paperwork and press their fingerprints on it, which they refused.

Mr. Liu Jia,53, went to Pengzhou City on January 6, 2022. Officers from the Pengzhou City Police Department arrested him and Ms. Gong Min, who was with him at that time.

Mr. Liu’s home in Chengdu was ransacked in the afternoon. He is held in the Chengdu City Detention Center.

Lu Jinya from the Xiaochen Township Police Station, together with another man, went to Ms. Cui Junqiao’s home in Danian Village, Xiaochen Township, Li County, on July 21, 2021. They asked if she still practiced Falun Gong and photographed her. Ms. Cui’s family stopped them when they attempted to photograph her bedroom.

Mr. Liu Sizhu was arrested on the afternoon of December 30, 2021. The police ransacked his home and confiscated his computers and other personal belongings. Mr. Liu is still detained.

Twelve officers from the Dianchang Road Police Station broke into Ms. Nie Yulan’s home on January 5, 2022, and arrested her. The police confiscated her computer, Falun Gong books, photo of Falun Gong’s founder, other Falun Gong related materials, and 2,600 yuan in cash, including 2,000 yuan in banknotes printed with messages about Falun Gong.

During the interrogation, Ms. Nie experienced tightness in her chest and was taken to the hospital for resuscitation. She returned home around 11 p.m.

She went to the police station the next day to ask for her Falun Gong books. The officers on duty refused to return them to her, and said their supervisor was not there. Ms. Nie went back on January 7 and asked for her books again. The officers said they would return all her confiscated items after she signed the paperwork and pressed her fingerprint on it. However, after Ms. Nie did this, she only received the document of her release on bail. The police told her to pay another 1000 yuan, which she refused.

The Changqing District Court held a court hearing against Ms. Cheng Chaoxia on January 5, 2022. Judge Wang Fang interrupted her defense many times. The prosecutor Cheng Li said that Ms. Cheng’s attitude was not good because she pleaded not guilty. Cheng Li then suggested a heavy sentence of at least three years. Ms. Cheng returned home after the court hearing.

Officers from the Huashan Police Station broke into Ms. Zhang Huiqiong’s home on December 23, 2021. They ransacked her home and confiscated her Falun Gong books, Falun Gong related materials, printers, and computers. Ms. Zhang was taken to the Wuhan Women’s Detention Center. She is still being detained after being held for 15 days.

Ms. Yu was taken to the hospital in the afternoon due to her high blood pressure. She was then taken home by her son.

About one month later, two officers from the Chagugang Police Station broke into Ms. Yu’s home on December 26, 2022. They pressured her to sign paperwork for a 10-day detention and threatened to arrest her again.

Shi Li (gender unknown), in Longcheng District, was arrested from home by officers from the Xiangyang Police Department at around 6:00 a.m on January 7, 2022. The officers also ransacked the place.

Officers from the Changjiang Police Station arrested Ms. Jiao Litian on November 15, 2020. They ransacked her home and confiscated her Falun Gong books and Falun Gong related materials. Ms. Jiao was interrogated and pressured to tell where she got the materials, which she refused to answer. She was released after her family paid 5000 yuan.

The police have repeatedly harassed Ms. Jiao since then. Once when the police returned to harass her Ms. Jiao’s blood pressure rose and she collapsed on the sofa. An officer forcibly fed her unknown drugs, saying she needed medication. They also harassed her family on the phone.

Ms. Liu Aihua and Ms. Ren Fengqin were arrested on January 12, 2021, after being followed by the police. The Dengta City Procuratorate approved Ms. Liu’s arrest on January 29 and later indicted her. She was sentenced to three years in late September. Ms. Ren, whose case details are not available, was sentenced to two years.

Both Ms. Liu and Ms. Ren appealed to the Liaoyang City Intermediate Court, which notified their lawyers that the appeals were denied on December 29, 2021.

Ms. Du Jiqun from the Fangzi District, was tried by the Hi-tech Industrial Development Zone Court and given a four-year prison term on February 22, 2016, for setting up display boards about suing Jiang Zemin, the former head of the communist regime who initiated the persecution of Falun Gong.

Ms. Du appealed the verdict to the Intermediate Court, which upheld the original ruling on January 11, 2017. She had to stay away from home to avoid further persecution. Ms. Du was arrested by officers from the Gaoxin District Domestic Security Division on January 17, 2020, when she went home to visit her grandmother, who was over 100 years old.

The police took her to the Weifang No. 2 People’s Hospital for a physical examination before taking her to the Women’s Detention Center. The detention center refused to admit her because she did not pass the physical exam.

Officers from the Gaoxin Court, together with four officers from the local police station arrested Ms. Du again on January 6, 2022. Due to her health issue, the detention center again refused to admit her. She returned home that night.

When Ms. Yu Zhanhua visited her daughter in Chifeng City, she was followed by officers from the Chifeng Police Department. They followed her to Balinzuoqi City and located her home there on January 6, 2022.

Ms. Yu’s husband, Ms. Xin Kui, was attacked by the officers the following day when he went downstairs. They took his keys and broke into their home. They ransacked the place and confiscated their personal belongings, including Falun Gong books and computers.

Ms. Yu was arrested and held in the Wengniuteqi Detention Center. Her husband was taken to the local police department but was released that evening.

“Overcoming Disability and Illiteracy, Experiencing the Wonders of Dafa”