(Minghui.org) Falun Dafa practitioners in Russia got together in the city of Irkutsk for two days in January 2022. They studied the teachings of Falun Dafa and shared their cultivation experiences, to encourage each other and improve together. They also held an event to tell the public about the ongoing persecution of Falun Dafa in China. 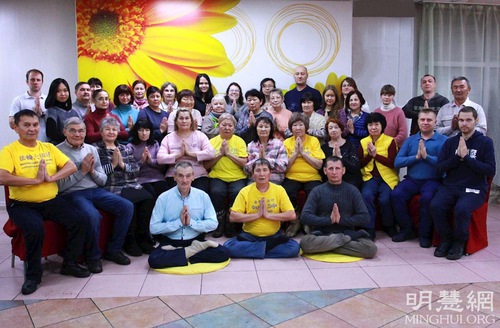 Practitioners held a two-day event in Irkutsk, Siberia. They studied the teachings of Falun Dafa together and exchanged cultivation experiences. 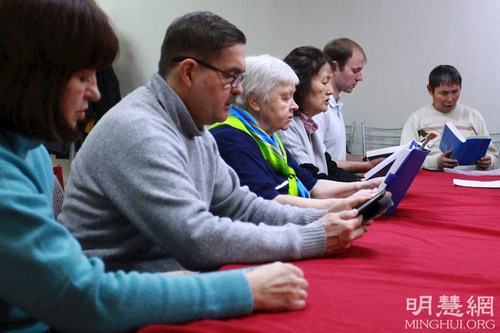 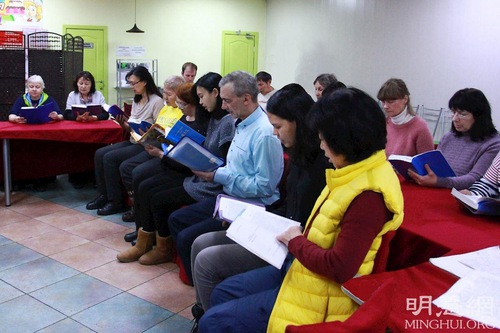 Practitioners study the teachings of Falun Dafa together in Irkutsk.

During the first day of their gathering, practitioners held an outdoor activity to raise awareness of the ongoing persecution in China. They collected signatures on a petition calling for an end to the persecution. The following day, they read the teachings of Falun Dafa and discussed their personal cultivation stories.

A practitioner from Moscow described how he stopped feeling arrogant after his experience in the Falun Dafa waist drum team. After he performed in a parade, he thought, “The waist drum team performs so well because I am in it.” Right then, he tripped and fell so hard that he dislocated his shoulder. He quickly saw his human notion and corrected his thoughts. His shoulder popped back into place, and he went on stage to perform.

Another practitioner from northern Russia drives a truck for a living. One time, his truck went off the highway and he couldn’t restart it no matter how he tried. He knew that if he didn’t get the engine running in five minutes, everyone with him would freeze. He asked Master Li, the founder of Falun Dafa, for help, and within a second the truck restarted.

One day, a practitioner from Ulan-Ude fell hard. He heard his ribs crack and felt a sharp pain in his chest. His sister, who is a medical doctor, told him that he'd fractured his ribs and needed immediate medical attention. Instead of going to a hospital, he did the Falun Dafa exercises. A week later, he recovered. Now, many people listen to him when he clarifies the truth with a big smile on his face, and many have signed the petition.

A practitioner from the Republic of Buryatia said that when she saw people die one after another from the CCP virus (Covid), she felt the urgency of saving them. She and her younger brother traveled to 30 villages and tourist spots to hand out fliers and collect signatures on the petition to end the persecution. She then shared a story about how she lost her temper when her husband got drunk. Immediately afterwards she felt a whip whipping her in another dimension, and her body hurt all over.

A practitioner who also came from Buryatia once collected nearly 500 signatures for the petition in three days. While she collected the signatures, she taught people how to say “Falun Dafa is good, Truthfulness-Compassion-Forbearance is good.” A person told her that, after reciting the phrases, his blood pressure returned to normal.

A practitioner who lives in Irkutsk shared how Master helped her. One time, she felt reluctant to go protest peacefully in front of the Chinese Consulate on her own, but in the end she talked herself into going. The next day, the temperature dropped to minus 30 degrees, but it didn’t stop her. When she got to the Chinese Consulate, she realized that the banner was so frozen that it would roll back once she opened it. She asked Master to help her, and the banner stayed open. As soon as she finished, the banner rolled back on its own.

Another practitioner from Irkutsk said afterward that she enjoyed the two-day event. She was moved when she saw everyone working together to help the public understand how the Chinese regime tortures practitioners who refuse to renounce their faith and systemically harvests organs from practitioners while they are alive for transplants. She said that she wants to have strong righteous thoughts so that she can save more people by helping them come to know the goodness of Falun Dafa.

Minghui.org has confirmed the deaths of thousands of practitioners as a result of the persecution over the past 22 years, though due to the difficulty of getting information out of China, the actual number is believed to be much higher. Many more have been imprisoned and tortured for their faith.

“My Boss Helps Me Cultivate My Character”