(Minghui.org) Today's news from China includes incidents of persecution that took place in 11 cities or counties in 8 provinces, where at least 14 practitioners were recently persecuted for their belief. 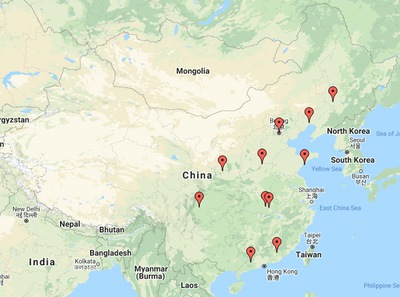 It was learned that the Meixian District Court planned to try Ms. Liao Xiaoping on December 21, 2021.

Ms. Liao Xiaoping, in her 60s, was arrested by 3 officers from the Wuzhou Police Station on October 3, 2021. Her home was searched and a few informational brochures about Falun Gong were seized.

Ms. Wang Hefang, a nurse at the Pinggu Hospital, was arrested on August 26, 2021. She has been held in the Pinggu Detention Center. Her case was passed to the Pinggu Court on December 14 and a trial was scheduled for December 28.

Mr. Jia Jingwen was arrested at home on December 19, 2021, by officers including Li Lei from the Taihe Police Department. It’s not clear where she was detained.

Ms. Tang, doing odd jobs sewing the bottom of trouser legs, was arrested a few days ago. It’s not clear who made the arrest or where she was held.

Jingchuan Political and Legal Affairs Committee authorities withheld Ms. Lu Huiling’s salary and detained her. They pressured Ms. Lu’s husband and instigated him to grab her hand and force her to sign the paper renouncing Falun Gong. Ms. Lu was not able to free her hand and had no choice but to watch as she was forced to sign the paper.

Ms. Wang Biyun, in her 60s, was arrested at home by officers from the Luojiashan Police Station on December 14, 2021

Ms. Duan Guixiu was arrested and the case against her was sent to the procurator on December 15, 2021.

Five agents including Wang from the Mengyang Street Office and Yang Jianbo from the Mengyang Community Office in Pengzhou City (a county-level city in Sichuan Province) went to Ms. Xue Linxiu’s home in the Jinniu District in Chengdu City on December 8, 2021, and tried to force her to read and sign a statement that defamed Falun Gong. Ms. Xue refused to read it and ripped up the paper. They then forced her into a corner between two walls and tried to forcibly collect her fingerprints.

Three officers including Zheng Yousong from the Macheng Police Department and Tang Weiguo from the Longchi Police Station went to Ms. Liu Yongmei’s home on the morning of December 18, 2021, and summoned her. They charged her with distributing informational materials about Falun Gong at the Hengtai Mingshi Residence and telling people a way to avoid the pandemic on December 6, 2021. On December 18, 2021, they tried to send her to the Macheng Detention Center even though she failed the physical examination. The detention center refused to admit her and she was released that evening.

Ms. Guo Xianping was arrested by officers from the local police station in the first half of 2021.

Ms. You Yuxuan from Qingdao City, 24, works for Guoge Technology Co., Ltd. after graduating from a university in Beijing. She was reported to the police and was arrested by officers from the Dougezhuang Police Station on December 9, 2021, for telling people about the persecution of Falun Gong. Officers seized her computer among other items. She is being detained for a term of 37 days.

Four officers from the Zhongyun Police Station knocked on the door of Ms. Zhang Xiulan’s daughter’s home and pretended to be property management staff. The door was opened and officers arrested Ms. Zhang Xiulan and took her away. Ms. Zhang’s mother was so traumatized that she passed away the next day.

Five or six Agents from the Luocheng Neighborhood Office, Residence Committee and Government went to Ms. Shen Xuemei’s home to harass her on the evening of December 16, 2021. An agent from the Luocheng Government took photos at Ms. Shen’s home. Ms. Shen was recently released after being held for 2 years in detention centers.

“Our Cultivation Experiences are Precious Jewels”