(Minghui.org) Today's news from China includes incidents of persecution that took place in 19 cities or counties in 13 provinces, where at least 34 practitioners were recently persecuted for their belief. 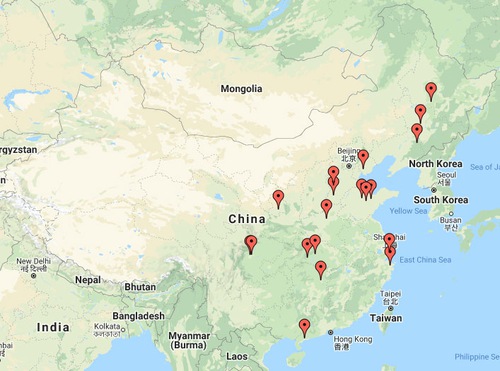 Ms. Gao Shuxia, a 52-year-old teacher at the Bayan County Vocational High School, applied at the end of November in 2021 for the top-level professional job this year. Because she practices Falun Gong, the Bayan Education Bureau did not give her an annual job title evaluation.

When Ms. Gao filed lawsuits against Jiang Zemin she signed using her real name. She was subsequently demoted by the education bureau. She currently holds a junior-level job.

Ms. Xu Guizhen and Wang (first name and gender unknown) from the Fangzi District were arrested by officers from the Fenghuang Police Station on the evening of December 7, 2021. Ms. Xu’s home was ransacked. Further information is pending.

The Fangzi District Political and Legal Affairs Committee recently posted a notice in the Fangzi District’s WeChat social media group that anyone who reported a Falun Gong practitioner to the authorities would receive a reward ranging from 3,000 to 40,000 yuan.

Ms. Li Caiping from Yuyao City was sentenced to two years and six months in prison and fined 5,000 yuan by the Yuyao City Court in early December 2021. Ms. Li has appealed the sentence.

Ms. Zhu Airong was arrested at home by Domestic Security officer Wang Dongfang and two plainclothes officers in late October 2021. They said that she was seen on surveillance cameras on May 7, 2021, when she distributed information about Falun Gong. When Ms. Zhu watched the video, the footage simply showed her walking. She told the officer who was interrogating her, “You are framing me.” Ms. Zhu was released at 4 p.m. that day. Before she left, she asked the police for the things they’d confiscated when they ransacked her home. They only returned an audio player. The police station chief later contacted Ms. Zhu to come to the station to sign paperwork, which she refused to do.

In November, when Ms. Leng, around 76 years old, returned home from the farmers’ market, two police officers waiting outside her residence asked her where she had been. They entered her home and looked around.

In early November, Ms. Zhao, around 77, was harassed. The police broke open the door and entered Ms. Yan Kuihua’s home and arrested her in November. Ms. Yan returned home that day.

On November 5, 70-year-old Ms. Cao Yongfen was followed and arrested by five or six people on her way home. They took her home and ransacked the place. They confiscated several Falun Dafa books and over 200 yuan in paper bills she carried with her. The bills had information about Falun Gong written on them. After ransacking her home, they carried her into the car and handcuffed her. The officer who interrogated her accused her of assaulting the police and placed her under 10 days of detention, to be served at home. They pressured her to sign paperwork, which she refused to do.

In early November, about 10 police officers broke into the home of Ms. Zhou Yumei, in her 70s, and arrested her. They ransacked her home and confiscated an MP3 player and a Falun Gong book. She returned home that day.

In mid-November, Ms. Gao, in her 80s, clarified the truth at a bus station and was followed and arrested by officers from the Beiqu Police Station in Qidu Town. She returned home the same day.

Three people from the Nanbao Economic Development Zone Police Department and the Sanyou Police Station went to the homes of Ms. Zhu Xirong and three other practitioners and harassed them between November 29 and December 3, 2021.

Mr. Su Linshu and Ms. Ren Lanshuang were reported to the police for talking to people about Falun Gong in Yuanshang Village, Xiaojue Town, Pingshan County, around 11 a.m. on November 30, 2021. They were arrested by officer Dong Huiwen from the Xiaojue Town Police Station and another plainclothes officer.

Both practitioners were taken to the police station, where they were photographed and interrogated before being released.

On the afternoon of December 1, the officers took Ms. Ren to the police station to be videotaped and questioned with a transcription. At her insistence, the officers returned her photos of the founder of Falun Gong and released her.

On December 2, the officers took Mr. Su to the police station for questioning with a transcription and then let him go.

Ms. You Quanfen was arrested and taken to a “care center” on Xiaonan Street in Tianpeng Town by three police officers at 9 a.m. on December 6, 2021. People from the Tianpeng Police Station, the Political and Legal Affairs Committee, and the West Street Residential Committee asked Ms. You if she made and distributed Falun Gong materials. She did not answer them. They said, “That’s not a good attitude. Go search her home.”

Several men held down her arms, grabbed her thumbs, and pressed her fingerprints on paperwork. They then read the document without showing it to her. They took her home at 11 p.m.

Ms. Zhang Ping was arrested around November 22, 2021, for talking to people about Falun Gong. She may be held in the Ning County Detention Center.

Mr. Lu Guokun from Dianbaiji was sentenced to three years and six months in prison. He was transferred in August 2021 from the Nansha Detention Center to the No. 9 Ward of Beijiang Prison in Shaoguan City.

When Mr. Lu’s family asked to visit him, prison officials turned them down, saying he was currently under strict supervision because he had not pleaded guilty and no family visits or phone calls were allowed.

Ms. Wang Xiangli was held in the Changzhou Women’s Prison in Jiangsu Province for an entire year. Her family was never allowed to visit or call her.

Ms. Long Youshi was arrested two or three days ago by officers from the Wujialing Police Station in the Kaifu District. She is being held in the No. 4 Detention Center. Further details are not clear.

Mr. Yan Yutao was arrested around November 14, 2021. No one has heard from him in over three weeks. It is believed that he’s being held in the Wujiagang No. 1 Detention Center. These organizations could have participated in arresting him: the Xiling District Domestic Security Division, the Yunji Police Station, and others.

Mr. Yan, a computer engineer, is disabled after having had a leg amputated. He has an artificial one. Mr. Yan has been arrested and persecuted many times. He was beaten when he was held in isolation in Fanjiatai Prison. Six times the prison changed “Baojia”—handpicked criminals directed to torture practitioners around the clock. He was repeatedly beaten by the Baojia and covered in injuries and bleeding. An inmate who had tuberculosis followed orders to abuse Mr. Yan to try to “transform” him. He would spit and smear spittle on his feet and then wipe his feet on Mr. Yan’s face. Despite beatings and abuse, Mr. Yan has persevered in practicing Falun Gong.

Ms. Li Meizhen, 76, has been arrested and detained many times since the Chinese Communist Party (CCP) launched the persecution in 1999. Her pension has been suspended for over a year starting in September 2020.

Before her retirement, Ms. Li worked in the Jiangxi Coal Mine Machinery Factory. Ms. Li wrote several times to the top leaders of the Jiangxi Provincial Social Security Bureau, asking that her pension payments be reinstated and that what had been withheld be returned to her, but to no avail.

Five or six officers from the Chengbei Police Station went to the workplace of Yang Xiaohua (gender unknown) around 10 a.m. on November 2, 2021. They told Yang that someone reported him/her. They confiscated dozens of Falun Dafa books and a tablet computer. The officers arrested Yang and Yang’s son but released them around 3 or 4 p.m. that day.

Ms. Xu Wanping, Ms. Liu Yuqi, and Ms. Liu Xiuhua were pressured to give their fingerprints around 7 p.m. on November 24, 2021, by 610 Office agents who were accompanied by community management office staff members Yang Jianbo, Yang Qi, and Liu Ying.

Ms. Wu Xi was arrested by officers from the Shangzhi Police Station on May 20, 2021. She was held in the Harbin City No. 2 Detention Center.

On June 4, the detention center told her family to come pick her up. They went, but she was not released. Ms. Wu has been denied family visits and even phone calls. Her whereabouts are unknown.

After answering a few questions, he was surrounded by four or five Law Enforcement Bureau staff members. Two of them grabbed his legs from behind, making him fall down. They held his head against the ground as two people grabbed his right hand to fingerprint paperwork with his index finger. Ji Huitian slapped him several times for not answering questions. When he refused to cooperate, they pressed Mr. Zhou’s right knee into the concrete floor. It was bruised and blistered.

Mr. Liu Xiangyu is nearly 50 years old. After the CCP started to persecute Falun Gong in 1999, he was suspended from work, taken to a brainwashing center several times, and detained by the police for not giving up Falun Gong. Due to the intense pressure he eventually stopped practicing.

Last year, Mr. Liu took a train home from out of town. When the railway police station found out that he had practiced Falun Gong, they went to his home, ransacked it, and confiscated his Falun Gong books. Because of the pandemic Mr. Liu was not detained. On November 30 this year, Mr. Liu was arrested and is currently being held in the Dashagou Detention Center in Qingyuan County.

Ms. Yang Xiaozhi from Hongtoushan Town was sentenced to six months in prison by the Changtu County Court for distributing Falun Gong materials in March 2021.

Under intense pressure, Ms. Yang’s blood pressure rose dangerously and she suffered a brain hemorrhage. She was taken to the hospital for emergency treatment. Officers from the Kaiyuan City Domestic Security Division checked on her in the hospital, but they could not arrest her or put her in prison.

On December 7, the Changtu County Court notified Ms. Yang to appear in court the following day. Ms. Yang, accompanied by her sister, went to the Changtu County Hospital for a physical exam. Even though her blood pressure was still high, she was given six months of criminal detention. She is being held in the Tieling City Detention Center. Ms. Yang is now being treated in the hospital designated by Tieling City Detention Center and is being watched by the police.

Ms. Liu Liying from Niuxinzhai Village, Ren County, was reported to the police for distributing calendars with information about Falun Gong in Xiajiucheng Village, Julu County, on November 23, 2021. She was arrested and interrogated by Julu Town Police Station officers. Two days later, she was placed under administrative detention for 15 days and was released on December 9.

Mr. Wang Nianqiang, a former employee of the Kailong Group Co. Ltd., has been harassed by staff members of the Kailong Community management office since April 2021. They pressured Mr. Wang to sign paperwork and threatened to take him to a brainwashing center in mid-December.

Officer Ma Jichang went to Ms. Niu Huiqing’s home to search the place on the afternoon of December 6, 2021. Ms. Niu’s son stopped him. Ma then called five or six more officers to Ms. Niu’s home to ransack the place. They confiscated a photo of the founder of Falun Gong, many copies of Zhuan Falun, a handwritten copy of Zhuan Falun, handwritten copies of recent articles by the founder of Falun Gong, Hong Yin, several copies of Hong Yin III, and copies of Minghui Weekly.

“New Practitioner in Mexico: Practicing Falun Dafa Is the Most Meaningful Thing I Have Ever Done”