(Minghui.org) On the evening of September 26, 2021, Shen Yun concluded its last performance in Houston, completing the company's four-city, fifteen-performance tour of Texas.

All fifteen performances in Texas were presented to full houses. Two of the performances were added prior to the original schedule due to high demand. 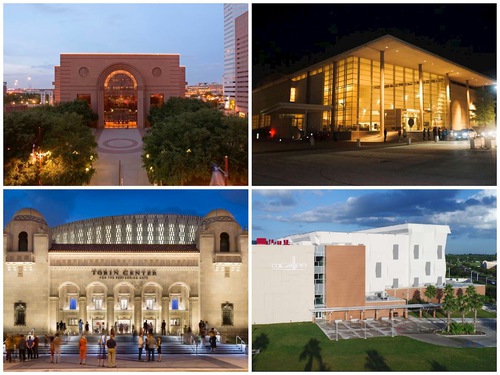 From August 6–September 26, 2021, the New York-based Shen Yun Performing Arts presented fifteen sold-out performances to four cities in Texas: San Antonio, Richardson, McAllen, and Houston. Two of the performances were added prior to the original schedule due to high demand. 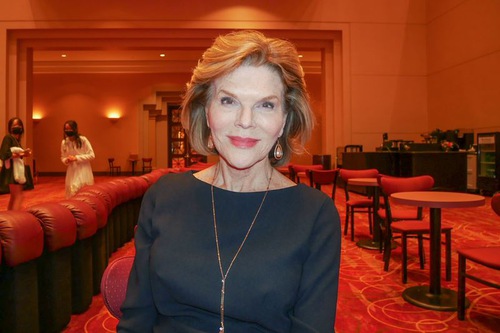 Barbara J. Elliott, president of the Center for Cultural Renewal and assistant professor of liberal arts at the Honors College, at Shen Yun's performance in Houston, Texas, on September 26, 2021.

Culture enthusiasts Barbara and Winston Elliott saw Shen Yun in Houston, Texas, at the added performance on the evening of September 26, 2021.

“I thought they were spectacular. First of all, the athleticism is just really—I mean, I know how hard it is to do some of the things that they did... I’m in awe of just the technical brilliance. But they express an inner beauty as well, an inner light—the inner masculinity, you know, when the men are there, and the femininity in the women—but also an indomitability,” said Barbara J. Elliott, the president of the Center for Cultural Renewal and an assistant professor of liberal arts at the Honors College.

“It’s beautiful, lovely. There’s the energy of the jumps and leaps and tumbles, but there’s also the subtle beauty and soft movement and color, that adds so much. The combination is marvelous,” said Winston Elliott, the president of the Free Enterprise Institute.

“I wish there were a lot more like them in every culture that exists on the face of the earth. I take in that history and I am richer for claiming that part of heritage. That is part of the human race we all share. But it behooves it. I really love the fact that the past and tradition are honored here and genuinely honored,” added Barbara.

Barbara, who was a Cold War reporter in Germany, said, “I really particularly enjoyed the direct anti-communist poke, their stories that I know very well in China’s history—that kind of brutal violence, that kind of terrorizing people, that kind of enforcement—I know that. I know it in my bones from the years that I spent basically with them and learning about them. So that part of the show really resonates with me, too, in a unique way.”

Winston said that the show is “very inspirational and hopeful, which is not a word we use very much today... There seems to be a shortage of hope. So today, in this performance, there was much hope and that is great.”

“I would say that it is soul-filling and eye-popping. And it’s an overwhelming of the senses, but also of the heart. It fills the heart,” Barbara added.

Winston said that for those interested, “they should definitely come and experience it themselves... Take in all the color and sound and movement that combines to both edify them—the eye and the ear—but also the spirit, and that’s wonderful.” 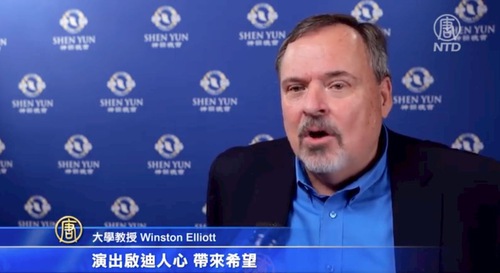 Winston Elliott, president of the Free Enterprise Institute, saw Shen Yun in Houston on September 26. He described the performance as “very inspirational and hopeful.” 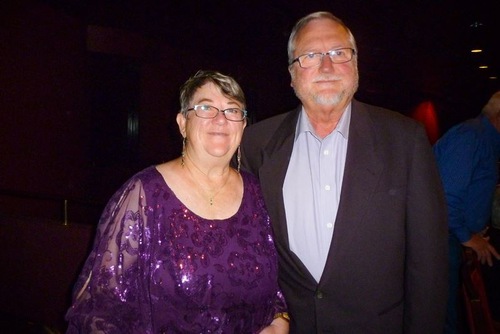 “I’m struck by the level of excellence,” the trombone and low brass instrumentalist said. “Not only the musicians [and] the quality of the music, but the dancers and the costumes... It’s just a total experience—it’s fantastic!”

“Everything is so clear and they play their parts so well. I can hear all the different parts very well, and of course, the string players are wonderful too! But I really appreciate that I notice in front of the conductor, there’s a couple of traditional Chinese instruments. I think one of them is called the erhu... I heard those incorporated in the rest of the music and thought it was a very good effect,” he said.

“In the West, we have things called leading tones and different scales than they use in the East, and somehow they have incorporated both of these into this music. So I’m looking forward to learning how they did that and made it work so well,” Mr. Graves continued. 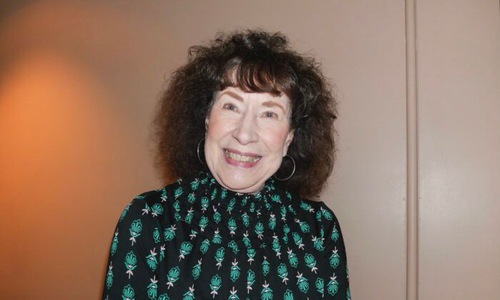 “The soprano was operatic—she was magnificent. And, the tenor was very, very good. The pitch was perfect, their technique was flawless,” Ms. Lovell said.

“The soprano’s technique was different than many that I have heard. Her vibrato was different, the timbre of her voice, but it was very, very pleasing to the ear.

“The soloists were wonderful, the pianist was wonderful, and the dancers were magnificent,” she said. 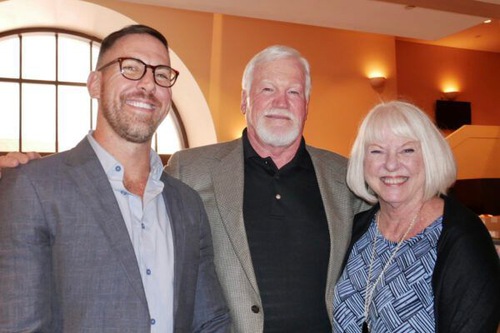 Peter Dorsey Jr., an HR Director for Honeywell, saw Shen Yun with his mother Susan Dorsey and his father Peter Dorsey, a retired vice-president of sales for Officemax, on September 25, 2021.

“Very precise. There was some humorous moments; there were some more sad scenes. It was an even mix of comedy as well as tragedy,” he said.

“The colors, the explanation of what was behind it, the symbolic meanings of dance and the story, and the music... It was all woven together very nicely!” said Mr. Dorsey Sr.

“That we’re all in the same boat, that we’re all human and we all have a past. It’s good to know what that is and it’s good to have something to navigate from or navigate toward with the idea of where you came from,” he said.

For Mrs. Dorsey, there were many aspects of Shen Yun that impressed her—the costumes, storytelling, and learning about China’s history. She also appreciated the spirituality in Shen Yun.

“That was phenomenal! I didn’t know what I was in store for when I came. I enjoyed it! It was class A,” she said. 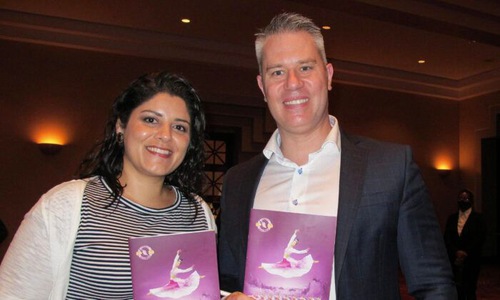 “I really enjoyed the performance, the depth of it, the spirituality,” Claudia Tanner said of her Shen Yun experience.

She said the performance hit on “a lot of deep themes” that a lot of people today are thinking about: “who you really are as human beings, that we were created, that there is more to life than what we’ve seen in the modern world today.”

Simon Tanner agreed, saying, “I mean for us, we don’t believe we are put here without a reason. We believe we are spiritual beings, that God put us here for a purpose.”

“Modern society has really lost its way... They are missing the point of life, so it’s awesome for us to see this,” Mr. Tanner said.

Mr. Tanner said that the performance about the Chinese regime’s crimes of organ harvesting was “hard for people to actually believe... but it’s happening.”

“We really hate the CCP. We are sickened by what they are doing, and this message needs to be told everywhere.

“I think a lot of Americans, we don’t realize what’s been going on... You get into a rhythm of life, materialism.

“I’ve learned from the past how America was about family, about quality time, about planning for the future, the legacy. These days, we don’t really talk about the legacy. It’s sad because America used to think that way. But now, it’s the deception and greed.

“But there’s always hope,” he said.

Mrs. Tanner agreed. “I think the best part was in the end, from our perspective, we see God healing the world, bringing the world back to the way it used to be, and that there’s time for people to get their life right... That’s God’s compassion.”