(Minghui.org) As the pandemic continues, Falun Dafa practitioners in Toronto have started a monthly parade since July this year to introduce the spiritual and meditation practice to the community. By embracing the traditional values of Truthfulness-Compassion-Forbearance, they hope the public will be blessed with peace and safety.

Falun Dafa, also known as Falun Gong, is a meditation system currently practiced in over 100 countries. In its birthplace of China, however, the Chinese Communist Party (CCP) has brutally persecuted it since July 1999. As more people both inside and outside China began to recognize the CCP’s track record of brutality, many of them have decided to reject the regime for a better future. 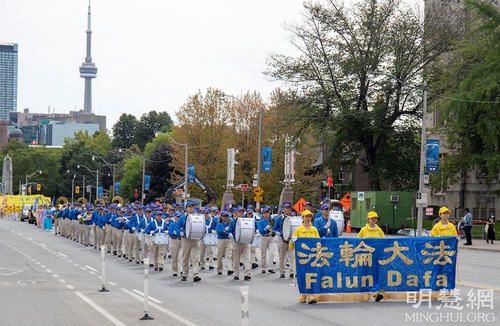 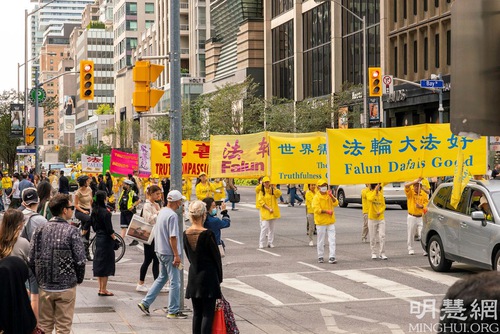 The Tian Guo Marching Band led the parade on September 25 in Toronto, Canada. 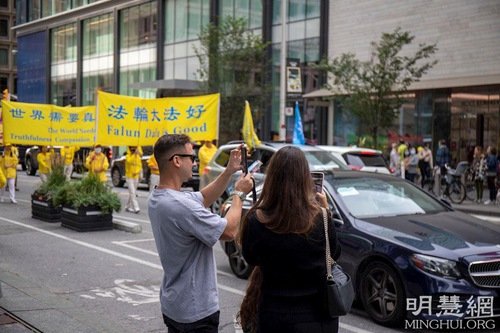 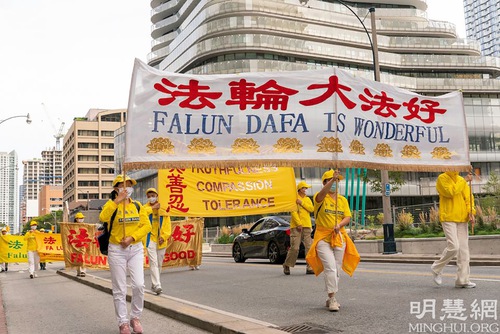 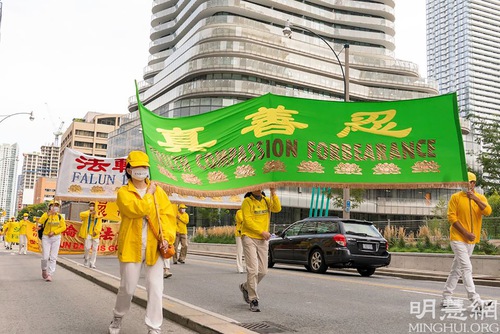 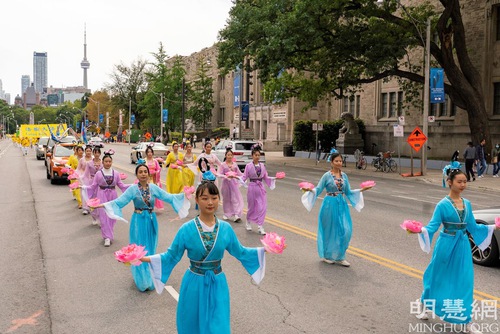 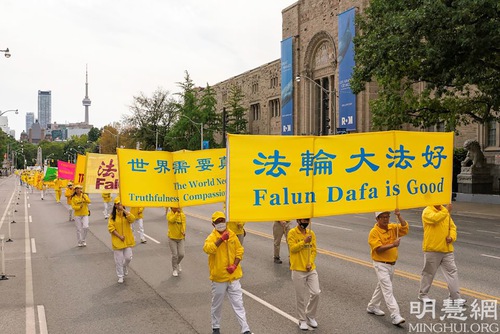 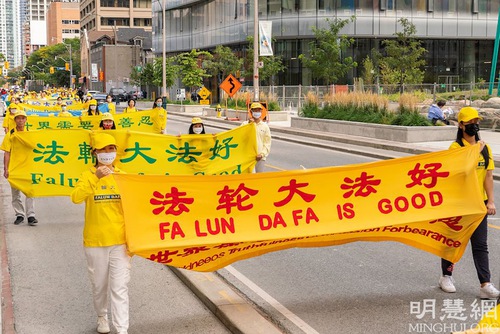 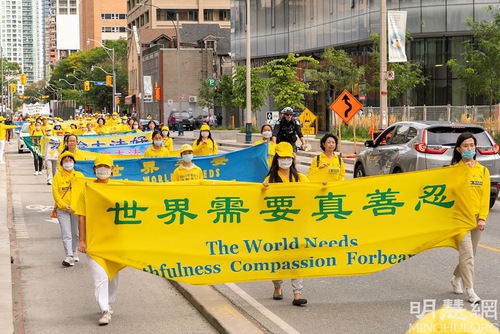 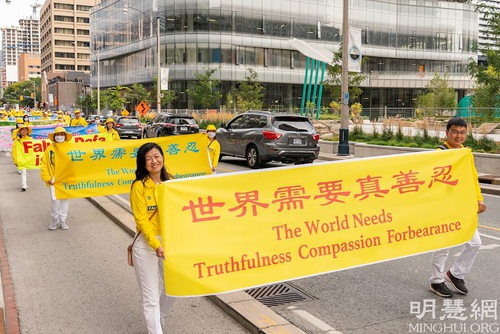 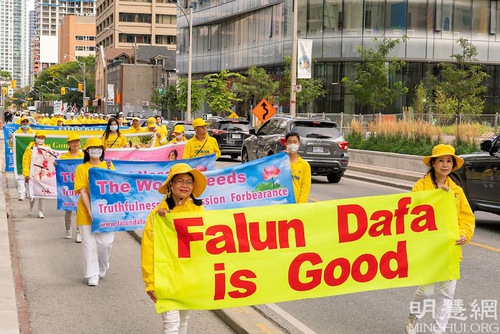 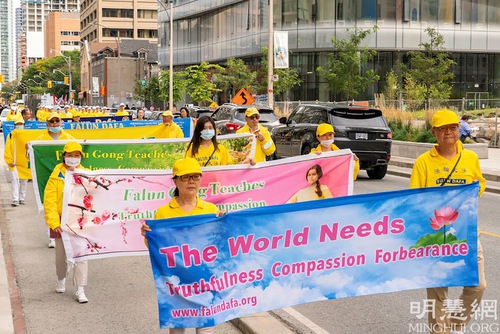 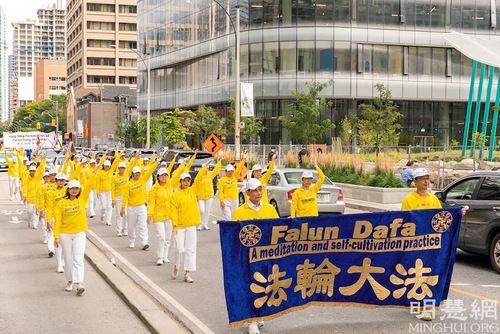 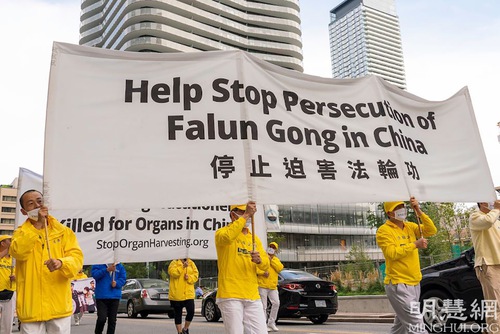 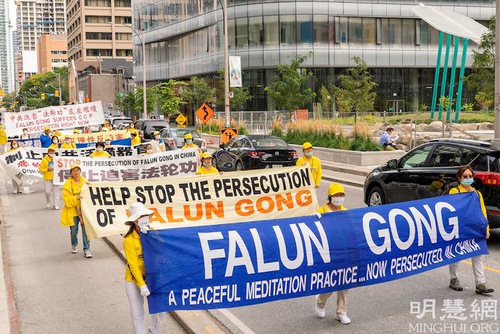 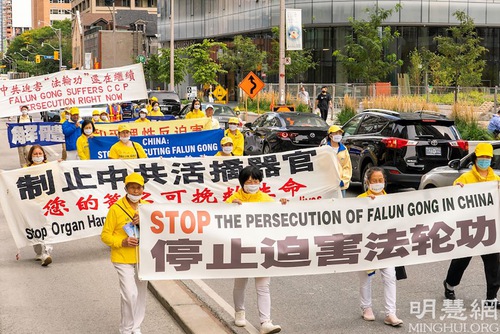 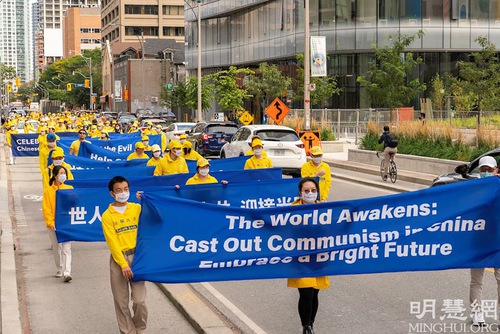 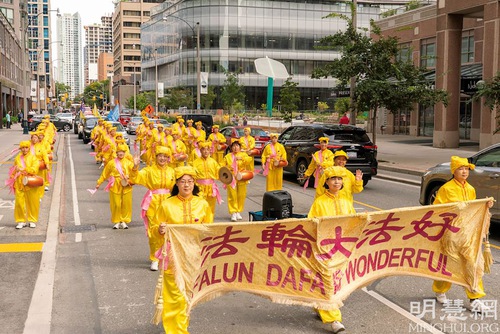 “My Entire Family Will Learn It” 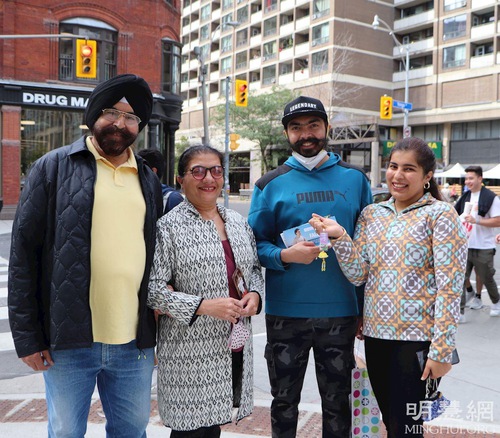 Similar to the previous two parades, the third one on September 25 also drew much attention from spectators. Many people took pictures and videos. Toronto resident Ggurgot and his family of four watched the entire procession and videoed it. “This must be good for a person’s mind and body,” he said. “Thank you very much for the information!”

His wife Sim agreed. “Look! There is a website here for free online teaching (https://www.learnfalungong.com/),” she said. “My whole family is excited about it, and we plan to attend it.”

Ggurgot said he could not understand why the CCP would suppress a peaceful practice like this. Coming from India, he knows meditation systems are peaceful and beneficial. “The persecution is wrong and we look forward to more events like this,” he said.

Medical Worker: A Land of Peace in a Chaotic Era 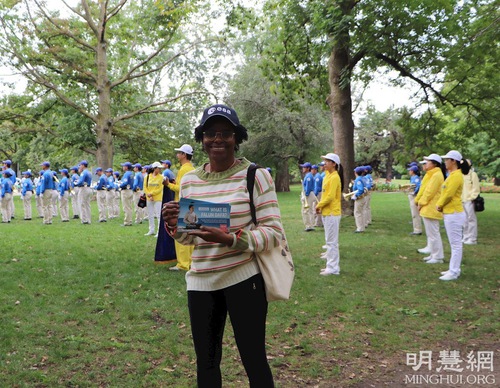 Anna works at a children’s hospital, and she is happy to see Falun Dafa practitioners at Queen's Park again.

After finishing graduate school, Anna came from the U.S. to Canada about 20 years ago. Currently working at a children’s hospital, she asked practitioner Ms. Li if there is anything she could do to help practitioners.

She said she had several encounters with practitioners in the past. “One day in the city center last year, I saw a petition that called to end the persecution in China,” she recalled. “I signed a petition and received a pamphlet about Falun Dafa.”

When she met practitioners again at another event, she asked if she could help as a volunteer. Ms. Li said yes and invited her to activities. “I had planned to come to join the parade in August but could not make it due to my knee surgery,” she said.

Nonetheless, she started learning the exercises online. One month has passed, and she found herself much more relaxed and calm than before. “The pandemic has messed up our lives and left everyone with uncertainty,” she said. “But Falun Dafa is a land of peace that we can trust.” Her legs have recovered well, making her eager to help spread information about Falun Dafa–both its benefits and the ongoing suppression in China.

After the event, Anna wrote to Ms. Li, saying she was so happy to participate in this event and looked forward to more opportunities. She was also glad to hear that there is a regular group exercise at Queen's Park and would make sure to join it.

The Importance of Truthfulness-Compassion-Forbearance 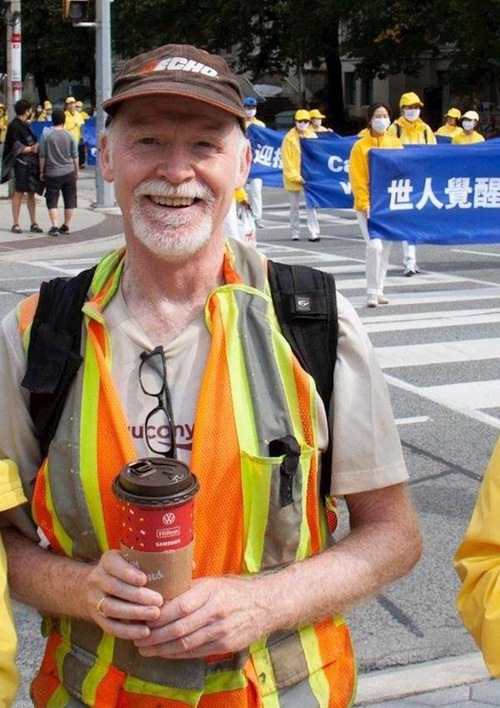 John is also a Toronto resident, and he walked with practitioners in the entire parade. Having heard about Falun Dafa more than 10 years ago, he also saw numerous events at different places over the years. He said the principles of Truthfulness-Compassion-Forbearance are very valuable for society.

Events like this are very important, he said. They provide an opportunity for people to stay informed; this way, people would be able to follow their own judgment instead of being misled by the CCP’s propaganda.

Falun Dafa “Helps Us to Understand Who We Truly Are” 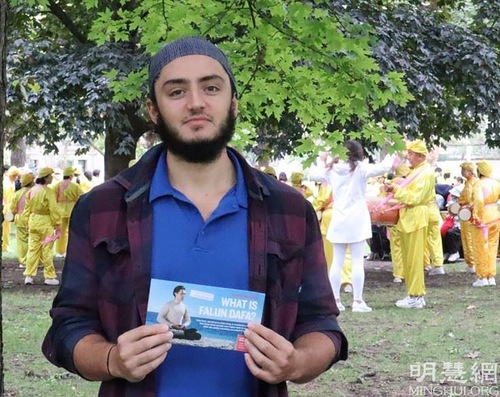 Luca learned the first set of exercises from a practitioner.

When practitioners did group exercises at Queen's Park before the parade, landscaper Luca joined and learned the first set of exercises.

Having received informational materials from a practitioner last week, he was happy to learn more about Dafa. Although he practiced for less than 20 minutes, he found he liked it very much already. “The music is very beautiful, and together with the gentle movements, they help make them peaceful, assured, and happy,” he explained. “I’m not doing the movement mechanically. Rather, I could feel a strong energy in it.”

Luca said the CCP is vicious because it severely mistreats practitioners for their belief. As a practitioner explained how she had suffered in China for her faith, Luca was moved to tears. “I know, the CCP does not care about people and it only wants to control people,” he said.

Luca said he would definitely search on the internet for more information. “I believe Falun Dafa will change our life. As we get rid of bad thoughts and calm down, it helps us to understand who we truly are,” he said. 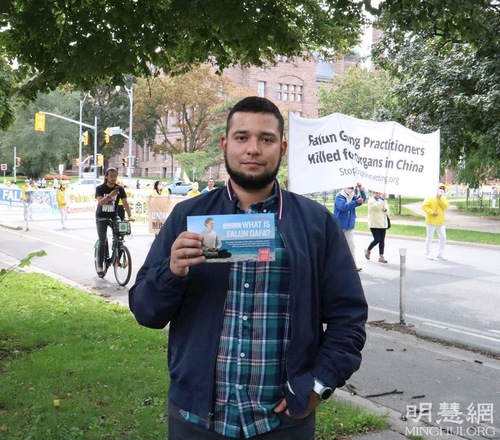 Miguel from Venezuela was shocked to hear about atrocities committed by the CCP in its persecution of Falun Dafa in China.

Miguel is from Venezuela, and this was the first time he had heard about Falun Dafa. Upon hearing that practitioners are imprisoned and tortured in China for their belief in Truthfulness-Compassion-Forbearance, he said it was unimaginable. “I have heard from social media that the CCP does not allow religious belief in China. But I did not know it is so bad,” he explained.

Upon hearing how China’s state apparatus was mobilized to persecute Falun Dafa practitioners including harvesting organs for profit, he was shocked. Coming from a country with no religious belief, he said he understood it is a truly miserable situation. “I will look up more information about this online and share it with my friends,” he said. 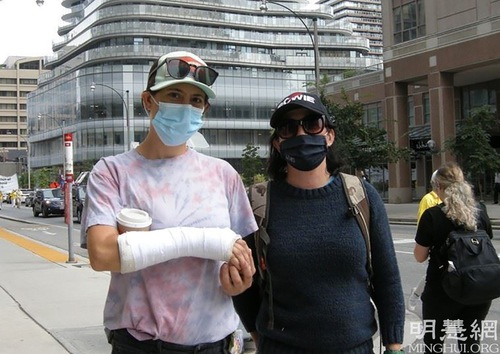 Insurance agent Alison Aston (left) said it is time to say no to the CCP.

Alison Aston is an insurance agent in Toronto and said she found the parade very beautiful. “It’s excellent, and that is why we stopped to watch it,” she said.

She knew Falun Dafa practitioners are mistreated in China for their belief. “Such a practice is so peaceful and beautiful. Everyone should have the right to do it,” she said. “It is the time for all of us to see through the CCP’s tactics and be clear what it really is. We have to oppose the persecution.”

Time to Hold the CCP Accountable 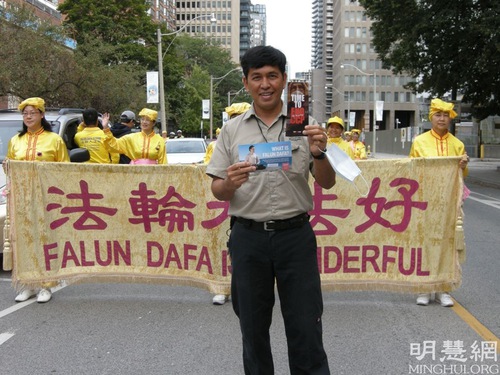 Randy Ribera poses for a photo with the practitioners’ waist drum team.

Randy Ribera came from the Philippines and he works in a federal building. “The performance is great. Really impressive!” he said.

He said the CCP is a dictatorship and it controls everyone and everything. “It is very different from here,” he said, adding that even in the Philippines, people have freedom of religion and assembly. “They are basic human rights!” he said.

Randy said the CCP is vicious in its treatment of Falun Dafa practitioners, especially with forced organ harvesting. “It is time to end the totalitarian regime and hold the CCP accountable,” he said.

“Gaining a Rational and True Understanding of Dafa”