(Minghui.org) Mr. Luo Hehui, a twenty-year-old who lives in Tokyo, said a major milestone in his life was not his graduation from university. Instead, his turning point was choosing to practice Falun Dafa.

Hehui was a curious ten-year-old. He wanted to know whether supernormal things really existed. If so, he wanted to have superpowers too! His curiosity fueled his interest in qigong, so he read some books about it. When his father got a copy of Zhuan Falun, he brought it home for Hehui.

As Hehui was only ten years old, he had trouble focusing when he read Zhuan Falun and didn’t understand it very well. While reading the book, however, he felt an immense world suddenly open—he felt the spiritual world truly existed. He felt every sentence in the book made complete sense. As he read further, he felt huge energy and wisdom flowing from the book. All these extraordinary feelings beckoned him so he read the book whenever he could, with all his heart.

Hehui was most impressed by Falun Dafa’s principles of Truthfulness-Compassion-Forbearance. After reading the book, he knew that there were criteria for good people and bad people. He realized cursing, quarreling with his classmates, and confronting his teachers did not meet the criteria of being a good person. He wanted to be a good person from the depths of his heart.

Little Hehui started to improve his behavior according to Falun Dafa’s principles. He found his relationships with others became harmonious. People around him not only became friendly but also praised his behavior. He clearly felt the change in himself. His mind gradually became peaceful and less contentious. In this way, Dafa’s principles guided him to be a good person and brought him happiness in life, even though he did not truly practice at that time.

He further wanted to learn the Falun Dafa exercises and found a practice site about an hour away from his home. But his father objected to his going to the practice site alone at the age of ten. His father wanted him to read Buddhist scriptures first. Hehui had to give up his wish of practicing Falun Dafa. However, the book Zhuan Falun planted a seed of cultivation in his young heart. Ten years later, the seed blossomed.

He enrolled in a prestigious high school, which had many rituals and customs related to Buddhism. He chose to major in Indian philosophy and Buddhist disciplines.

After having to stay home during the coronavirus outbreak in 2020, he had time to think about his life. The call from deep inside his heart, the wonderful memory of Zhuan Falun, awakened the seed buried in his heart ten years ago. He decided to practice Falun Dafa.

He found the nearest practice site and learned the exercises in December 2020, and thus truly started practicing Falun Dafa. He told his family about Falun Dafa when he went home for the New Year. Hehui answered their questions and taught them the five sets of exercises. 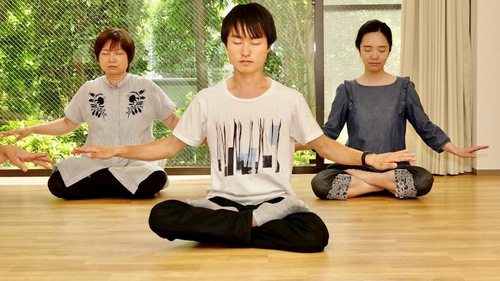 After practicing Falun Dafa, Hehui felt the positive change in himself. He was no longer selfish and started to consider others first. He also learned to look inward and examined himself for shortcomings.

For example, he read a comic which glorified aggression. After reading it, he felt the contents strengthened his attachment to competitiveness. He realized the thought of being aggressive was bad and should be eliminated.

One day Hehui was stopped while talking to other students in a resident building about Falun Dafa. When he looked inward he realized he had a desire to force his opinions on others.

When he first began practicing, he only focused on the formalities such as how many exercises he did or for how long he did them every day, and whether he cultivated his speech. Later he realized that he needed to look inward and not just pay attention to the outward form in cultivation. It was meaningless to just polish the surface of his behavior; the key point in cultivation is to improve xinxing (character, or mind nature).

Hehui wants to let more Japanese know about the persecution of Falun Dafa. He found that most Japanese are only interested in what cultivation means in their daily lives. For example, how many exercises Falun Dafa has, what these exercises are, what practitioners do at practice sites, etc. So with other practitioners’ help, Hehui redesigned the leaflet for Japanese people. He believes practitioners should always put others first and do everything in a way that other people can accept.

Hehui said he cherishes the opportunity to practice Dafa. He follows Truthfulness-Compassion-Forbearance in his everyday life and does everything with his heart. He also wants to take every opportunity to tell people about Falun Dafa, so that more people can benefit from it.

“Sichuan Woman Harassed After Serving Time for Her Faith”