(Minghui.org) A 70-year-old Shanghai resident is facing trial for her faith in Falun Gong, a mind-body discipline that has been persecuted by the Chinese communist regime since 1999.

Sentenced to Four-year Prison Term in 2001

Ms. Sun was sentenced to four years in the Shanghai Women’s Prison in 2001. She was forced to stand or sit for long hours, sometimes into midnight. The physical torment left her dizzy most of the time. Yet the prison guards constantly beat and verbally abused her.

Ms. Sun’s next arrest was on May 13, 2011, for hanging up a banner to celebrate Falun Gong’s public introduction 19 years prior. She was sentenced to five years in the Shanghai City Women’s Prison by the Pudong New District Court.

During her imprisonment, the guards stuffed her mouth with a dirty rag and taped her mouth, ears, and head, as well as her hands, legs and feet, simply because she shouted “Falun Dafa is good.” Then, the guards hit her head with a heavy object while verbally abusing her for two hours. Not until Ms. Sun collapsed and became incontinent, did the guards stop the torture. 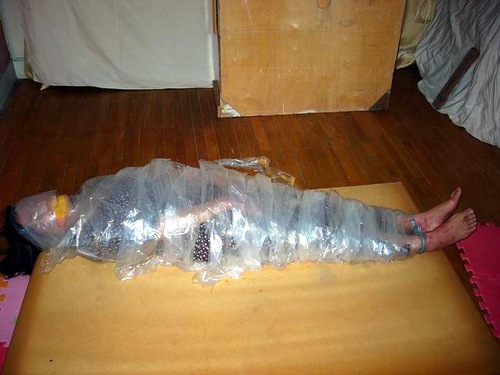 After that, the guards repeatedly ordered Ms. Sun to write statements to renounce Falun Gong. When she refused to comply, they held her in solitary confinement and provided her with very little food. She was forced to stand facing the wall from 5:30 a.m. until lunch break at noon, which was only ten minutes. Afterwards, she was forced to stand again until dinner. After the ten-minute dinner break, she continued to stand until 12:00 a.m. Throughout the day, the inmates could beat and verbally abuse her at will.

When Ms. Sun still refused to renounce Falun Gong, the inmates forced her to squat all day long within a square drawn on the ground without moving. Sometimes they also dragged her around to torture her.

By the time Ms. Sun was released in May 2016, she has lost hearing in one ear. She had pain all over her body. She was unable to stand, sit or walk, and has trouble eating and sleeping.