(Minghui.org) Ms. Sun Zhuoying was sentenced to five years in prison for hanging a banner on May 13, 2011, commemorating the 12th World Falun Dafa Day.

While imprisoned at the Shanghai Women’s Prison, the 65-year-old suffered inhumane torture for refusing to renounce her faith in Falun Dafa, a spiritual discipline being persecuted by the Chinese communist regime. She sustained severe health damage as a result.

Upon her release in May 2016, Ms. Sun wrote the following account of her experience.

I shouted “Falun Dafa is good,” one day in prison. The prison captain heard about it and ordered some inmates to stuff a dirty cloth into my mouth and to wrap me up in layers of sealing tape—my mouth, ears, head, legs, and feet, with my hands bound behind my back.

They beat my head with heavy objects as they cursed me. This lasted for about two hours until I fainted.

The beating caused me to bleed heavily and become incontinent. I was transferred to the Shanghai City Prison Hospital.

After I was taken back to the prison, the captain talked to me every day. She ordered me to write a statement to give up my belief in Falun Dafa. I refused and was taken to solitary confinement for several days.

In the cell, I was forced to stand 18 hours a day from 5:30 a.m. until midnight while facing the wall. I was given two 10-minute breaks for lunch and supper. Inmates constantly cursed, insulted and beat me.

Several days later, they forced me to squat motionless within a small area that they drew on the ground. They continued to curse, beat, and kick me far past midnight every day.

When they found I was still not moved by their violence, they pulled me outdoors to be interrogated by the police officer on duty.

I slept beside a chamber pot every night. The guards seldom allowed me to empty the pot and it smelled awful.

They made a small stool especially for me, the one that squeezed my hips while I was sitting on it.

Two prisoners forced me to write a statement promising to give up my belief in Falun Dafa. One held my right hand and ordered me to write on a piece of paper. I refused and she slammed my hand hard onto the table while the other inmate held my left hand behind my back.

They forced me to sleep on a wooden board and wrapped me in sealing tape. They bound my hands, feet and body together before wrapping up my feet and legs separately. I couldn't move even a little.

Then they covered me with thick cotton blanket. It was summer and it was hot. I sweated heavily until I showed symptoms of heat stroke.

In my delirium, I heard them say, “She is dying. Her face is pale and soaked in heavy sweat.” 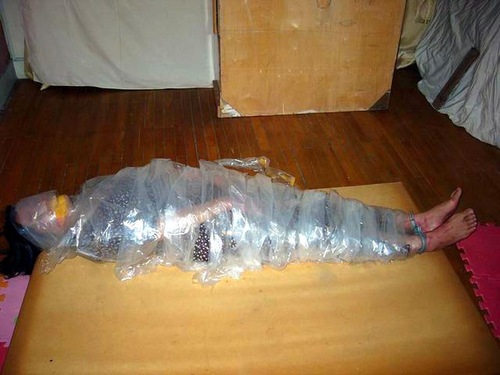 They tortured me so severely that I was often in critical condition. They took me to Shanghai Prison Hospital every couple of months. I once lost consciousness at the hospital from heavy bleeding in my stomach.

The prison switched tactics when they realized threats would not shake my faith. The guards put me in a Taoism study session. I agreed to take up the class after I found it as a good opportunity to tell inmates there about Falun Dafa.

I read about Taoism in the morning and told the group about Falun Dafa in the afternoon.

Though I didn't take those Taoist things seriously, it was against the Falun Dafa principle of not following two schools of cultivation at the same time. I soon paid a price for my halfhearted attitude toward Falun Dafa.

At one meeting I was ordered to read aloud an article titled “Lost” written by a former Falun Dafa practitioner. I followed their order and read it at the meeting. Later on they forged my handwriting and rewrote the word “Lost” in that article.

I was not aware of their deception until one day a jail guard said, “You wrote a statement promising to give up Falun Dafa practice long time ago. It doesn't matter if you write a second one.”

I was transferred from Section II to Section IV of the prison in 2014. In June of that year, jail guards demanded all inmates to write statements of confession. I wrote down one sentence: I acknowledge the sentence given to me by the court.

One year later I realized that my acknowledgement was totally wrong, so I wrote a formal declaration to nullify my previous statement. For this, I was placed in solitary confinement.

I was also forced to sit in bed until midnight every day before being allowed to sleep. When my watchers noticed me sleepy, they beat me violently and poured cold water on my neck.

In the middle of a cold winter they removed my blanket every fifteen minutes at night.

They forced me to walk or run back and forth in the cell, and frequently ordered me to write a report about my thoughts within a certain period of time. This happened many times every day.

They ordered me to sit straight and watch the video of the Self-Immolation Hoax repeatedly every day and write a report about my reflection on it.

I was released in May 2016 and returned home.

Cruelty, Torture and "Transformation" in the Fifth Division of Shanghai Women's Prison