(Minghui.org) One participant in the annual Jersey Girl Triathlon on August 4, 2018 wore an eye-catching outfit with the words, “Freedom for Falun Dafa.” She is 67-year-old Jeanne Mitchell, third place winner in the 65-69 age group. 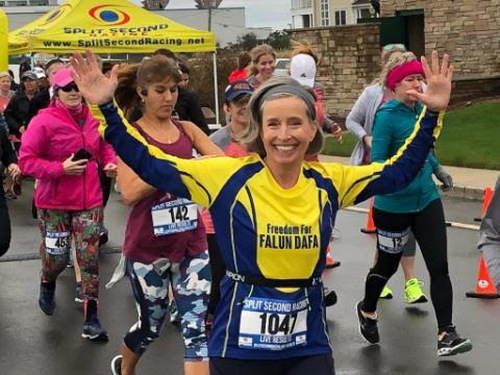 Jeanne Mitchell at the starting point of the Beauty and the Beach Run on November 3, 2018

Reaching retirement age, many people would look forward to a leisurely and comfortable life. Why did Jeanne participate in a triathlon that challenges people’s will and endurance?

Two Setbacks in a Happy Life

Jeanne was born in an upper-middle-class family in Mineola, New York. Her father was a lawyer in New York City. In college, she majored in Fine Arts and later received a Master's degree in social work. She also painted and held a solo exhibition in a private gallery in Chelsea, Manhattan.

After giving birth to her son in 1981, Jeanne suffered from postpartum depression. Her condition gradually improved. In 1992, her long-awaited daughter was born. Jeanne had a good income, a nice job, a supportive husband, and a healthy son and daughter—her life seemed perfect.

Unfortunately, Jeanne fell into postpartum depression again, and this time it was worse. She was hospitalized for two weeks. Medical treatment did not resolve her condition, and her therapist could not understand why she suffered from such severe depression when her life seemed perfect. Her doctor advised her, “You need to find the meaning of life.”

In fact, Jeanne had been exploring spirituality since she was 18. Heeding the doctor’s advice, she tried yoga and Tai Chi.

In 2003, a friend who practiced Tai Chi suggested that Jeanne try Falun Dafa meditation. She asked her husband to help her find the book Zhuan Falun. Her husband looked it up online and came across slanderous content about Falun Dafa from the Chinese Communist Party (CCP). He was puzzled and paid close attention to the changes that Jeanne experienced after she began practicing Falun Dafa.

After reading Zhuan Falun, Jeanne felt a peace that she had never experienced before. Her depression and anxiety were completely gone. The chronic fatigue she had since she was young was also gone. Since then, she has been incredibly healthy.

Jeanne said, “In the past, my immune system was very weak and I often caught the cold and had fevers. After I began practicing Falun Dafa, I became healthy almost overnight. At family gatherings, my relatives always said, ‘Give the sick child to Jeanne. She won’t get sick.’”

What impressed her most was that she found the true meaning of life. “I found what I was seeking when I learned Falun Dafa,” Jeanne said. “I think I've become a better person.”

Her husband agreed. “You've become easier to get along with,” he told her one day. Since then, her husband has been very supportive of her practice. 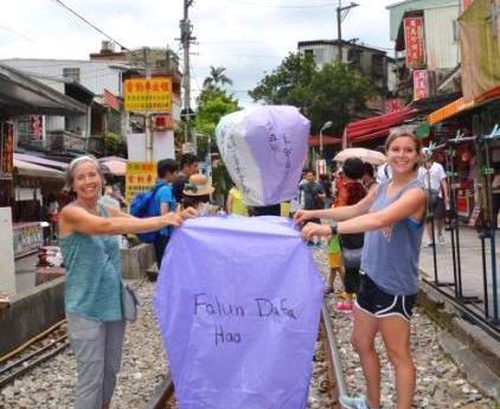 Jeanne (left) prepares to release a sky lantern with the words “Falun Dafa is good” in Taiwan.

As the third child in her family, Jeanne often felt left out, and she wanted to be affirmed and valued by others. Jeanne had a conflict with her sister after their parents died, but she was able to let it go because she practiced Falun Dafa.

After she began practicing Falun Dafa, Jeanne heard that some Western practitioners were learning Chinese. At first, she felt that it was a fantasy for herself because she was tone deaf and would not be able to learn the four tones in Chinese. Two years later, she had a strong desire to learn Chinese.

She first went to a Chinese school to study with young children. Then she took a Chinese class at Columbia University. Jeanne was soon able to read Zhuan Falun in Chinese. She also told her professors and classmates about her personal experience of practicing Falun Dafa and how the CCP persecutes Dafa in China.

After retiring, Jeanne and her husband moved to the northernmost coast in New Jersey, where the scenery is beautiful and the beaches are wide. She made many new friends.

In order to let more people know about Falun Dafa practitioners’ efforts to counter the CCP’s persecution, Jeanne decided to participate in a triathlon. As a 67-year-old who had never participated in physical competitions, she would find her strength and endurance challenged. Her wish was to finish the race while proudly wearing a T-shirt with the words “Falun Dafa.”

From January 2018, when she decided to participate in the competition, to the end of the race in August, Jeanne trained systematically. Running was the most challenging part for her.

There were a thousand athletes in the competition, who were divided into different age groups. Jeanne made several competition suits with the words “Freedom for Falun Dafa” on the front and back, as well as the website faluninfo.net.

Everywhere she went, the event staff, coaches, apparel manufacturer representatives, athletes and family members were curious about the words on her sportswear. Jeanne told them about her positive changes after she began practicing Falun Dafa and about the persecution in China.

One day, Jeanne went to a local recreation area to practice swimming. Because the current was too fast, she returned to shore before long. When she got back to her car, two middle-aged men came over and said they’d noticed Jeanne swimming and couldn’t imagine how she managed in such a fast current. She told them that she wouldn’t have been able to do it if she did not practice Falun Dafa.

Both men were surprised and said she didn’t look her age at all. They wanted to learn more about Falun Dafa and took photos of the back of her competition suit. The following week, Jeanne started teaching one of the men the Falun Dafa exercises. 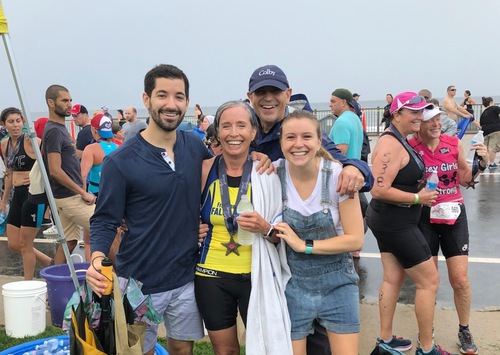 On August 4, 2018, Jeanne participated in the Jersey Girl Triathlon and won third place in the 65-69 age group. Her husband, daughter and daughter’s boyfriend watched the event proudly. She posted photos and videos taken by her family on the event's website and on social media.

The support of Jeanne’s family moved readers on social media, and Jeanne received many likes and comments. The first message she received was to ask about the meaning of “Freedom for Falun Dafa.” She knew this was another great opportunity for people to learn about Falun Dafa and the persecution in China.

Jeanne later reflected, “If there were no Falun Dafa, my life might be over. I could never imagine finishing in a triathlon at the age of 67. This is a miracle, and it is also the mighty power of Dafa. I hope the world will know that Falun Dafa is good, and cherish and respect Dafa so they can be blessed too.”