The Testimony of a Renowned Chinese Calligrapher and Artist (Part 2)

The police broke into his house soon after Mr. Wang got home.

“They took me to the Lize Police Station before I even had time to catch up with my family,” Mr. Wang said. “They then transferred me to Binzhou Detention Center on the afternoon of January 23, 2001, on Chinese New Year’s Eve.”

The next day, the staged “self-immolation” on Tiananmen Square was broadcast, which shocked the entire country. The police immediately forced Mr. Wang to watch the news on TV, and arranged for him to be interviewed with reporters from the Public Security Bureau, who asked him about his thoughts on the “self-immolation.”

“This could not be true,” Mr. Wang said to the reporters, “because killing and suicide are absolutely forbidden in Falun Dafa cultivation, and our Master has explained this to us very clearly. If those people were true Falun Dafa practitioners, they would never have ‘self-immolated.’ It must be an orchestrated hoax.”

The police reporters wanted Mr. Wang to slander Falun Dafa to promote their propaganda. But he refused to cooperate. In the end, the reporters left, dejected.

Mr. Wang refused to sign the detention notice. As a result, he was transferred to Wangcun Forced Labor Camp on March 1, 2001, where he was subjected to constant torture and intensive forced labor.

“The food was awful and I had to do the jobs of several people. I often felt dizzy and flustered due to the long hours of intensive labor,” Mr. Wang recalled.

He was eventually released on September 1, 2003, after two years and six months of inhuman treatment, which caused him severe physical and mental damage.

According to reports on the Minghui.org website, there were around 300 forced labor camps and 700 prisons in China. As of July 10, 2019, as many as 86,050 Falun Gong practitioners had been unlawfully arrested, and 28,143 had spent time in forced labor camps; 17,963 had been sentenced to prison, and 18,838 had been taken to brainwashing centers; 809 had been confined in psychiatric hospitals, and a total of 518,940 practitioners had been subjected to various forms of torture. In addition, there were untold cases of discrimination, arbitrary termination of employment, loss of income, mental trauma, broken families, injury, disability, and death over the past two decades of persecution.

For more than two decades, Shandong has been one of the provinces where the persecution of Falun Gong was the most severe, both in terms of the number of persecution cases and the cruelty of the crackdown. Minghui has also exposed many cases of the brutal persecution of Falun Gong practitioners in the Wangcun Forced Labor Camp. A number of Falun Gong practitioners have lost their lives or become disabled resulting from abuse in this camp. Mr. Zou Songtao, a master’s degree graduate in Marine Biology from the Marine University of Qingdao, was one of the victims. He was only 28 years old when he was tortured to death.

According to persecution case statistics published on Minghui, in terms of the number of Falun Gong practitioners unlawfully sentenced to jail since July 1999, the top three provinces are Liaoning (2,165 cases), Heilongjiang (1,746 cases), and Shandong (1,545 cases). With regard to the number of practitioners illegally sent to forced labor camps from 1999 to 2013, Liaoning (3,223 cases), Shandong (2,963 cases) and Hebei (2,877 cases) provinces have the most cases.

At least 413 Falun Gong practitioners died as a result of persecution in Shandong Province between 1999 and 2019, and three more deaths were added to the list in 2020.

Mr. Wang was once again arbitrarily arrested by police on April 1, 2004, after he quit the Chinese Communist Party using his real name. He was sent to Wangcun Forced Labor Camp for the second time for a three-year term, and was detained in Division 8 as before, where practitioners were forced to do very intensive labor every day for long hours. Most of them often had to work overtime until two or three o’clock in the morning.

In order to resist the cruel persecution, Mr. Wang wrote a six-page report in accordance with the “Laws and Regulations on Labor Reeducation” and the “Labor Law” formulated by the Ministry of Justice to expose the unlawful conduct of the police guards. Many Falun Gong practitioners signed their names on the report to show their support. Wang took the report to the division office and read it aloud to the head of the division and other team leaders.

“All of them were totally dumbfounded for a while, and it took some time before they realized what was going on. The division leader yelled out to silence me, and they dragged me to another room to punish me violently, and locked me up in solitary confinement for a month,” Mr. Wang recalled.

He was confined in a small room, damp and dark, and guarded by police day and night. During the day, he was hung to an iron bunk, known as “shang da gua”(hanging up by the wrists), and tortured on “si ren chuang” (dead person’s bed) at night time.

When tortured with “shang da gua,” both hands of the victim were handcuffed to the rail of an iron bunk bed or a window frame, with their toes barely touching the ground. Sometimes the police would force the victim to stand on one end of a bunk bed and cuff their hands to the rail of the upper bunk on the other end, stretching the victim’s entire body into a very painful position. Other times, the perpetrators cuffed both hands of the victim behind their back and hung them up so as to cause extreme and excruciating pain. 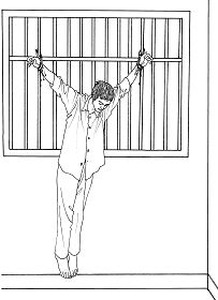 The “dead person’s bed” torture method involves the victim’s four limbs being stretched out and cuffed spread-eagle to the four corners of a cold metal bed. Being tied this way for a long time causes severe physical injury, and even permanent disability or death in extreme cases.

“Soon after I was taken to the ‘strictly controlled team,’ six more Falun Gong practitioners were brought in as well,” Mr. Wang recalled, “We were forced to sit still on small stools for long hours every day. If any of us moved even a little, the thugs punched and kicked us violently. Practitioners were often beaten until their heads were bleeding.”

“The situation was especially bad in the summer. Because we sat on the small stools for a long time, some practitioners’ buttocks became festered. The rotten flesh and their pants stuck together, causing them excruciating pain each time they were forced to sit on those stools.”

Practitioners were not allowed any verbal communication between one another, and if they spoke to each other they were brutally beaten. It was commonplace for practitioners to be injured from such beatings. They were not allowed to go to bed until after 11:00 p.m., and were forced to get up at 4:00 a.m. to start another day of persecution. The “strictly controlled team” was the most ruthless place in the labor camp, where practitioners were subjected to endless torture and suffering.

“There was a Falun Gong practitioner named Yin Zijing, who went on a hunger strike for three months to resist the persecution, and was held in solitary confinement for a long time. He was violently force-fed many times until his life was hanging by a thread,” Mr. Wang recalled. “The labor camp had to notify his family to pick him up. Later, I learned that Yin Zijing continued to study the Falun Gong books and do the exercises after he got back home, and he regained his health a month later.”

Because Mr. Wang did not cooperate with the evil and firmly refused to give up his faith, he was often handcuffed and hung up by the vicious police. Three days before he was due for release, they locked him up in solitary confinement until the last minute.

The Suffering of His Family

Mr. Wang's family also endured much suffering, especially his wife. During his detention in the labor camp, the police often went to his home to harass and intimidate his family.

His wife used to be a school teacher, but was forced to stop working because of Mr. Wang's belief in Falun Dafa. This took a heavy toll on her health for the next few years, and she developed a serious heart disease due to unbearable mental torment. She was so ill that she had to stay in bed for almost a year.

Their daughter was a student at the time and had been performing quite well up to that point. But due to the excessive mental stress, she could no longer concentrate on her studies and wasn’t able to function as well as she used to in exams. As a result, she lost the opportunity to go to a university. Her head teacher felt very sorry for her, as she used to be such a promising student.

Mr. Wang said, “For the past 21 years, the Chinese Communist Party has never stopped the persecution. Falun Gong practitioners and their families have suffered a most bloody suppression, the likes of which has never been seen in human history.”

“I should have had a good environment to work as an artist, but because I refused to denounce my belief in ‘Truthfulness-Compassion-Forbearance,’ I was brutally persecuted by the wicked regime. For a period of time, I had to stop my career in calligraphy and painting,” Mr. Wang continued.

After regaining his freedom in 2007, Mr. Wang resumed painting and calligraphy. Once again, his art became very popular. With the support of his friends, he moved studio he established in 2000 to the center of Binzhou City. Many people with high social status learned from Mr. Wang how brutally Falun Gong practitioners were persecuted, and many of them even quit the Chinese Communist Party and its affiliated organizations after learning the truth from him.

Continuing to Expose the Persecution Overseas

In November 2012, after attending a Sino-American cultural exchange event in the U.S., Mr. Wang chose to stay on, under political asylum, and continued to expose the brutal persecution of Falun Gong practitioners through his personal experience. 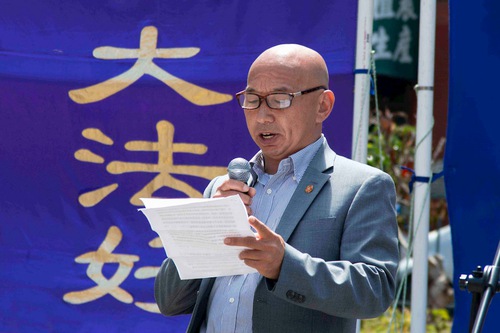 Mr. Wang spoke to expose the persecution on July 20, 2019, in the San Francisco Bay Area.

“In a blink of an eye, I have been in the United States for nine years already. During the past nine years, I spent a long time doing the Falun Gong exercises and clarifying the truth to people in front of the Chinese Consulate in San Francisco and taught people to practice Falun Gong in a cultural center. We gradually established a practice site there with more than ten regulars,” Mr. Wang said. “As my cultivation improved, I started to become interested in calligraphy and painting again, and have now produced some traditional calligraphy and paintings.” 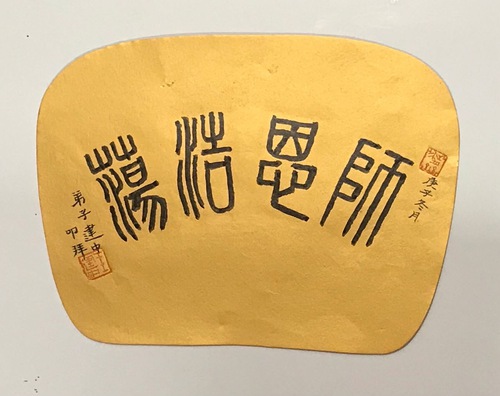 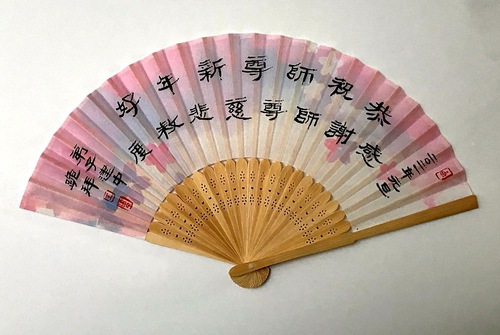 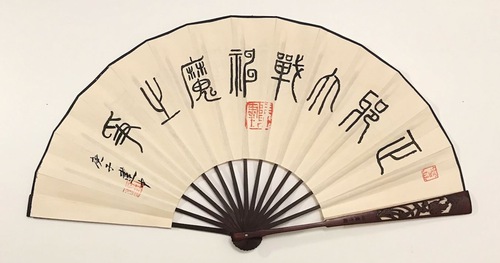 Mr. Wang’s calligraphy: The Battle Between Justice and Evil, Gods and Demons (in seal script) 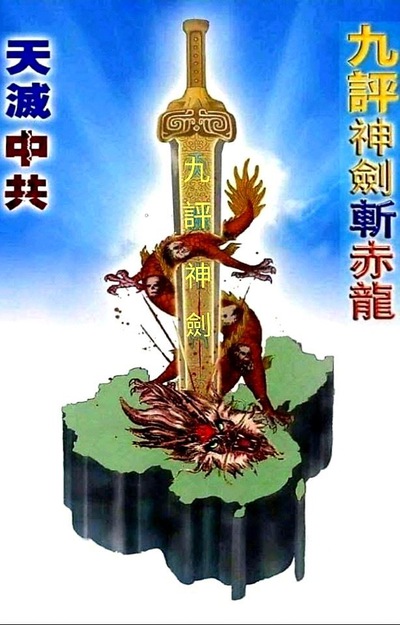 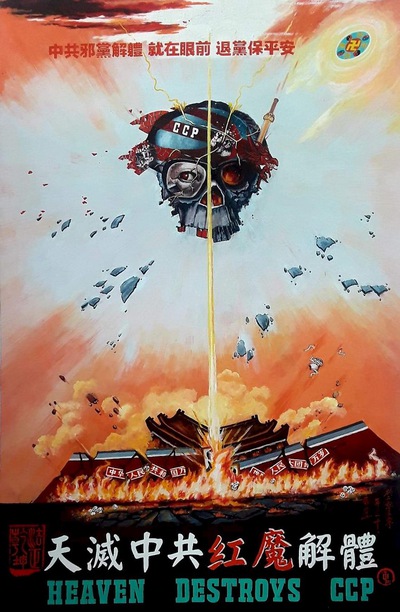 “Husband and Wife Imprisoned 13 and 12 Years for Their Faith”