(Minghui.org) Today's news from China includes incidents of persecution that took place in 16 cities or counties in 8 provinces, where at least 55 practitioners were recently persecuted for their belief. 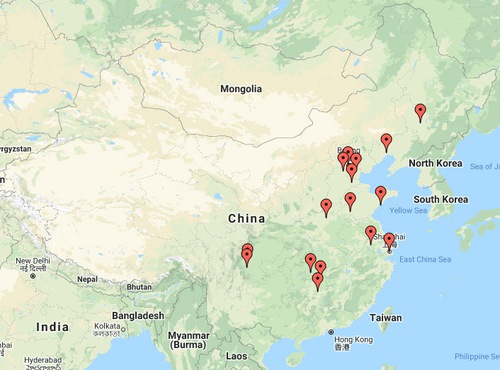 Ms. Wu Shuhua was harassed at home on the afternoon of January 20, 2021. The village Party director, who received the order from Shenjiaying Town Justice Office, came to her home and threatened to hold a brainwashing class for Ms. Wu if she continued to practice Falun Gong. The village official also attempted to photograph Ms. Wu. Her husband has been under tremendous pressure mentally and suffered financial losses.

Mr. Xia Hongmin and two other female practitioners were reported to the police and arrested on January 20, 2021 for clarifying the truth at the market in Wei Village, Laishui Town. They were taken to the Laishui Town Police Station and interrogated.

They all received a notice of “Administrative Punishment Decision” and were under 12-day administration detention that will be executed outside prison due to the pandemic. Their family members were called to pick them up at around 8 p.m. that evening. Their electric bikes are still being held in the Wei Village Office.

More than 29 practitioners in Wuling District had their homes raided on December 16, 2020. The raids were conducted by officers from different police stations and the Wuling District Police Department. Yang Biqiong, Yang Guomin, and Fan Congrong were subjected to 10 to 15 days of detention.

Mr. Wu Zhengrong was arrested on June 10, 2020 for distributing truth-clarifying materials. His home was ransacked. He was sentenced to two years in prison on December 4, 2020, and is now imprisoned.

Ms. Peng Xueying was tried in the Pengshan District Court and sentenced to ten months in prison on December 30, 2020. She was then taken to the Pengshan Detention Center.

Ms. Shuai Huilan and Ms. Jian Lanying from Suji Town, Shizhong District, were arrested by officers from the Jiajiang County Domestic Security Division for distributing truth-clarifying materials on January 18, 2021. Their homes were ransacked. Their Dafa books and photo of Falun Gong’s founder were found in Ms. Shuai’s home. It’s not clear what was taken from Ms. Jian’s home. Currently Ms. Shuai and Ms. Jian are detained in the Leshan City Detention Center.

Except for Mr. Zhou Yonglin and his wife Ms. Sun Jiping, the other five practitioners were released on bail on January 20 and 21, 2021. Their families paid from several thousands to over 10,000 yuan to bail them out. Mr. Zhou and Ms. Sun were taken to the Linghai City Domestic Security Division and are currently detained in the Jinzhou City Detention Center.

Ms. Liu Shujuan and Ms. Li Xiuping were seen posting truth-clarifying stickers on December 8, 2020. Officers from the Shuiji Police Station came to Ms. Liu Shujuan’s home to harass her and her family around noon on December 11, 2020.

That same day, officers from the Development District Police Station came to Ms. Li Xiuping’s home in Yuanzhuang Village. They searched her home and found a Dafa book. They forcibly took Ms. Li to the police station for interrogation. Ms. Li tried to clarify the truth to the officers. She was released two hours later. Ms. Li was harassed by local police officers again on December 19, 2021, with the excuse of taking a nucleic acid test. Ms. Li refused to cooperate.

Ms. Li Shufang lives in Dafuyuan Community, Tongzhou District of Beijing. She was arrested at home by several plainclothes policemen around 3 p.m. on October 24, 2020. She was taken to the Ciqu Police Station. Her home was ransacked. Her Dafa books, three copies of Minghui Weekly and 1,000 yuan in cash were taken away.

The next day Ms. Li was taken to a hospital twice for physical exams, and then to Tongzhou Detention Center that night. The detention center refused to take her because her high blood pressure was up to 205. She was given another exam the following day, but was still rejected due to her health condition. On the third day, her family was called to pick her up in the Ciqu Police Station. She is now under residential surveillance.

Ms. Li received a call from the procuratorate on December 6, 2020. The caller hung up the phone after Ms. Li tried to clarify the truth.

Ms. Li was taken to the procuratorate by officers from the Ciqu Police Station on December 9, 2020. She was questioned there for about one hour.

Ms. Wen Xiaomei has been harassed at her home multiple times in 2021. People from the Hejiang Police Station, the Hejiang Street Sub-District Office, and the Hejiang Community came to her home repeatedly. They pressured her to sign the guarantee statement and warned her not to distribute truth-clarifying materials. They also threatened to suspend her salary.

Ms. Li Guiyun from Wenshang County was arrested in June 2020. She was later sentenced to one year and six months in prison. She has been detained in the Jining Women’s Prison for six months since then.

Mr. Yu Chunbo is detained in the No. 2 Detention Center of Changchun City. It was learned that he suffered a physical problem while in custody.

Ms. Wang Quandi was arrested in Hongkou District on December 24, 2020. She is now detained in the Hongkou District Detention Center. It was reported that Ms. Wang has been on hunger strike in the detention center.

Ms. Dong Huanying from Dengfeng City was reported to police for clarifying the truth in March 2020. She was released on bail for one year. The case against her has been filed with the procuratorate and the trial was scheduled in Xinzheng City on January 26 or 27, 2021.

Many practitioners in Yangcun Town, Wuqing District had been harassed in the second half of 2020. The harassment was conducted by multiple related government branches including the police station, the town government, the sub-district office, and the local community office.

“Ailing Man Hospitalized After Being Arrested, Faces Trial for His Faith in Falun Gong”