(Minghui.org) The annual Australia Day parade in Adelaide was canceled this year due to the CCP virus outbreak. The Australia Day Council of South Australia (ADCSA) took to organizing small-scale celebratory events instead. Local Falun Gong practitioners were invited to participate in a multicultural event. 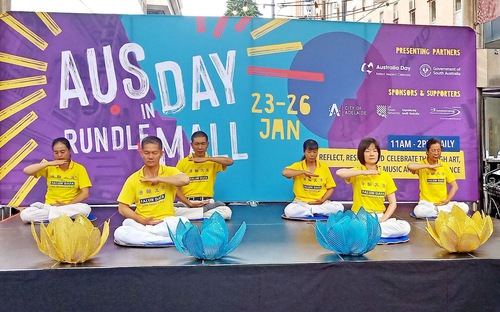 Falun Gong practitioners demonstrate the exercises on an outdoor stage in Rundle Mall, a pedestrian street mall in Adelaide.

Demonstrating the Exercises in Downtown Adelaide

Falun Gong practitioners demonstrated the exercises on an outdoor stage set up in Rundle Mall, the most popular pedestrian street mall in central Adelaide, during the afternoon of January 25, 2021. 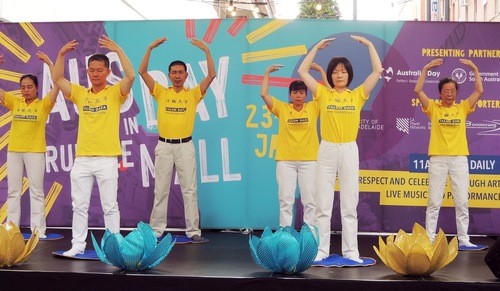 The calming music and relaxed exercise movements drew the attention of many passersby. The emcee introduced Falun Gong as a peaceful, high level, Buddhist way of spiritual practice based on the principles of Truthfulness, Compassion, and Forbearance.

People stood quietly watching the demonstration. Some took brochures while others took photos. There were Chinese among the spectators, and they appeared pleasantly surprised to see the exercise demonstration. A man in the audience mimicked practitioners doing the exercises. A practitioner showed him how to do the movements while his female companion videotaped them.

Two people asked who paid to have the brochures printed. They were told that practitioners who wanted to share the benefits of the practice covered the cost and that there are no costs involved in learning Falun Gong, that practitioners teach the exercises voluntarily. “That’s wonderful,” they said.

Sharing the Virtues of Truthfulness, Compassion, Forbearance at a Cooking Show

Practitioners were invited to take part in a cooking show on January 22, 2021, called “Australia Day in Central Market.” The show promoted different cultures and lifestyles through food and cooking demonstrations. Practitioners introduced people to traditional Chinese dumplings and practicing cultivation in ancient China. 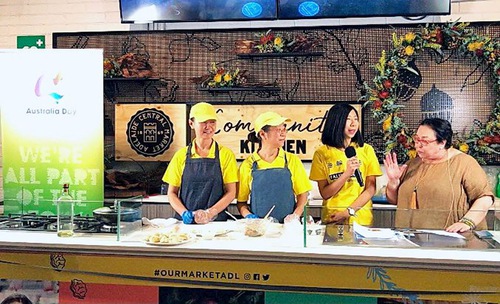 Celebrated South Australian chef, teacher, and TV presenter Rosa Matto indicated that she knows about Falun Gong and agrees with the principles of Truthfulness, Compassion, and Forbearance. She reminded the cooking show viewers to watch the exercise demonstration at Rundle Mall on January 25.

Practitioners were dressed in bright yellow T-shirts with the message “Falun Dafa is good.” Several people approached practitioners before the start of the event to take photos. Valerie from the Philippines, who was part of the event staff, expressed interest in learning the exercises. She said she wanted to introduce it to friends and coworkers.

Two practitioners demonstrated how to make and fry dumplings. One of them, Katherine taught viewers the recipe and the customs behind making dumplings. She also introduced Falun Dafa. 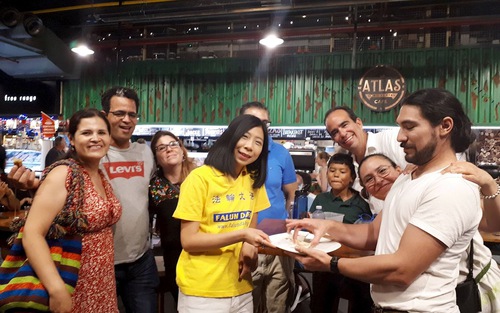 Jamie, a Mexican chef (right), shares the dumplings made by practitioners with his friends and takes a photo with a practitioner.

Jamie, a Mexican chef who participated in the cooking show, tasted the dumplings and said, “This is the most delicious dumpling I have ever eaten. It tastes great, something I have never tried before. I love it. The dipping sauce is amazing too.”

He took a plate of dumplings to share with his friends. Many people said they looked forward to seeing the exercise demonstration at Rundle Mall on January 25.

“Our Corn Stalks Withstand a Typhoon”